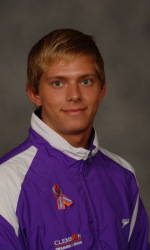 ATLANTA – Sophomore Tom Recko and junior Rachel Regone have put in Olympic Trial qualifying times at the Georgia Tech Long Course Invitational. The two are eligible to compete for a spot on the United States Olympic team at the Olympic Team trials in Omaha, NE from June 29- July 6.

The two will now prepare and train before heading to Omaha to try out for the Olympic Squad. Regone will also compete in the 200 free relay, 100 free, and 50 free for the Tigers at the NCAA Championships in March.