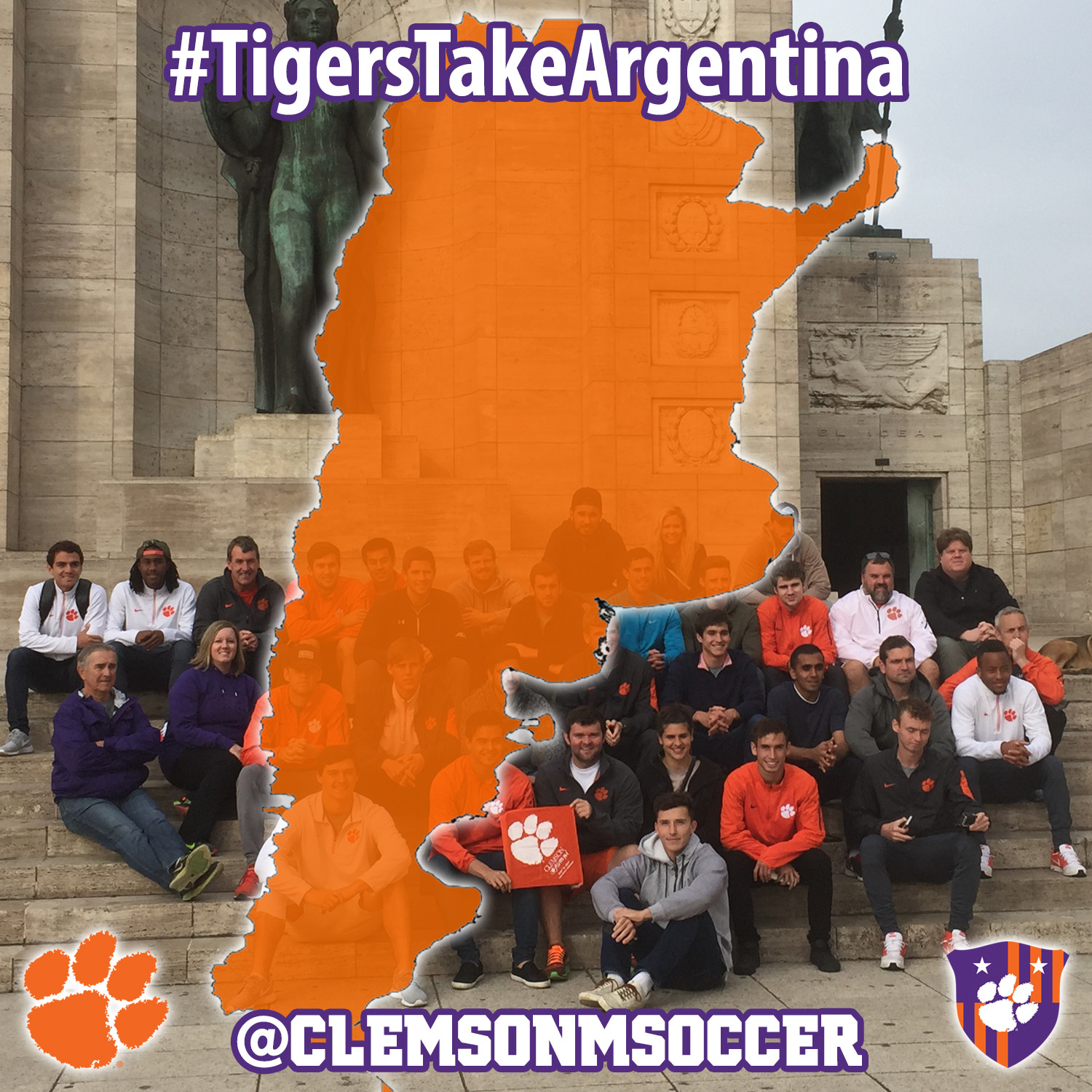 Head Coach Mike Noonan offers his final thoughts and reflections on the Clemson men’s soccer team’s tour of Argentina from May 10-23.

“A trip of a lifetime…It just keeps getting better and better…The best trip I have ever been a part of…What an amazing experience…THANK YOU!”

These were the words repeatedly echoed off the lips of everyone who was fortunate enough to have made the trek to Argentina. Our appreciation is also echoed in each of these comments, as a dream was made a reality by Dan Radakovich and the Clemson Athletic Administration, IPTAY and the 2014 ACC Champions. We are also indebted to Ricardo Ansaldi, his family and Premier Soccer Tours for providing us with incredible service and hospitality. The opportunities presented educationally, socially and most importantly, in the fùtbol culture and matches we were able to compete in and watch, were unparalleled.

For those who are not familiar with the NCAA rules, a foreign tour is only permissible once every four years. These opportunities also offer competitive recruiting advantages that are vital on our landscape. Therefore, from my perspective, the priority was centered around the competitive pieces of the journey (#BusinessTrip) and how it would prepare us for future seasons.

With this in mind, the “business” that college athletics represents is centered on the educational and formational aspects that Clemson embodies. Having Professor Greg Ramshaw along to teach the course in Globalization in Soccer was added value, particularly for those participating in the course, but also for all of us on the trip. Our academic advisor, Lindsey Ricketts, complemented this with influential oversight of our players who had begun summer courses.  Lindsey and Vickery Hall have done inspirational work in developing our team culture of excellence and it was in full view throughout the trip.

Libby Kehn, our athletic communications director, did a fabulous job in capturing the essence of the tour through her daily blogging and social media updates. I received several compliments from alumni, family, friends and recruits who felt “connected” with us throughout out trip.

As narrow as this may sound, my focus was not necessarily on what we may be able to learn or enjoy, but how we would COMPETE against the formidable opposition that Ricardo had prepared for us. Each of the matches challenged us in different ways and immersed us deeper into the Argentinian’s winning fùtbol passion and culture. In the soccer world they call unofficial matches outside of the league play or sanctioned tournaments “friendlies.” I don’t think that anyone observing any of the matches would categorize them as a “friendly.” However, it was not hostile or “dirty” play, or matches marred by fouls and gamesmanship. Each match was well-officiated and fiercely competitive, particularly when the “Yanks” scored the opening goal.

Upon reflection, what made me most proud is that it was our players and team that made the matches so competitive. They would not succumb or back down to any adversity they faced. This adversity included playing five matches in 11 days with only 17 outfield players; having three minutes of “injury time” extended comically until our opposition scored the equalizing goal nearly a full six minutes later; and playing each match against a fresh 8-11 opponents substituted against us at halftime. In Argentina, the culture is inherently ultra-competitive because 1) everyone plays (on display in our street match in La Boca) 2) tradition of success and national pride and 3) if you lose…you do not survive. For most, losing means returning to abject poverty and living conditions that are indescribable. Every match therefore was a meteoric clash of wills that made us examine and deliver our own passion and desire to compete.

Through this experience, our team grew, leaders emerged, players matured and intangible cartilage formulated that bonded us together with a spirit that would not be broken. Did we learn some things from the Argentinians? Without question! But if you asked the Argentinian teams the same question, I believe you would get a similar answer.

José Chamot, Rosario Central’s Academy Director, vocalized this to us after our last match. José has some credibility in the game and a commanding presence (think tight end in the “other” football). He played for Argentina in three World Cups (’94, ’98 and ’02), won a Silver Medal at the ’96 Atlanta Olympics and won the 2002-03 Champions League in Europe with AC Milan and two Copa Italia medals. I had the pleasure of meeting José the day before our match where he spoke about his philosophy for the club. He welcomed the team the following day by saying how happy he was that we came and that we would always be welcome at Rosario Central because that is how he and his family were treated when he went abroad to play in Italy and Spain. His humility and grace were once again on display after our game, a come-from-behind 2-1 Tiger victory. The first thing he said is that we were a great team fighting for each other the whole match. We were “comrades” on the field who gave everything we physically could. He complimented our organization and communication but said the reason we were able to wrestle the result was our team spirit. Although he felt the Rosario team may have displayed more technical skill player for player, he has learned throughout his career that a better team defeats better skill most of the time, at every level.

Throughout the trip, our team culture, values, talent and behavior were severely tested. In my estimation, the Tigers stood up to the scrutiny and took massive steps toward growing into a team that will compete for further honors next fall. Our final record was 3-2-1, including the “street match” in Boca. Each of the matches was decided by one goal, win or lose. One of our losses also came against San Lorenzo less than 24 hours after landing. San Lorenzo is the club Pope Francis supports and used to bless the team before they went out to play when he resided in Buenos Aries. (I mentioned the competition was tough.) The players are all home now getting some well-deserved rest and awaiting the arrival of 10 talented reinforcements in June. A trip of a lifetime closes and the next chapter begins.

Read all of the journal entries from the trip: