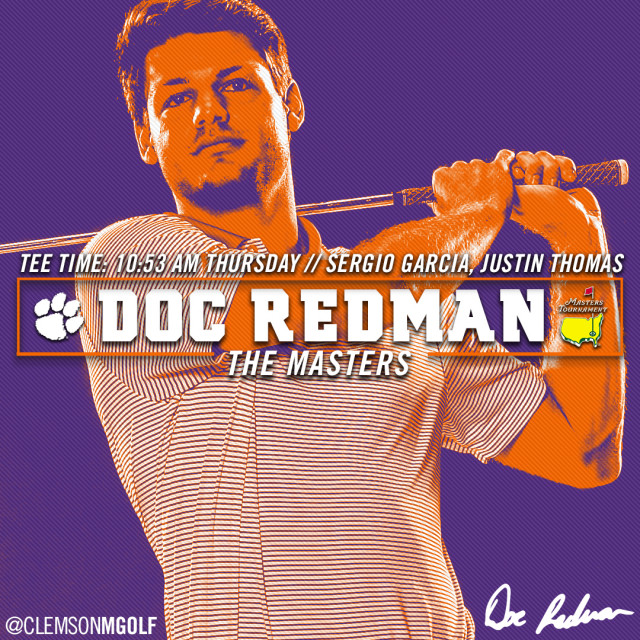 Redman and Stanley Ready for Masters

Clemson, S.C.—Current Clemson sophomore Doc Redman and former Clemson All-American Kyle Stanley begin play at the 2018 Masters on Thursday. Redman qualified by winning the 2017 United States Amateur back in August and Stanley earned an invitation by virtue of his victory at the 2017 Quicken Loans National. Clemson and the University of Texas are the only schools represented by a professional and an amateur at the 2018 Masters.

Redman will play with two of the four major champions from 2017, PGA Champion Justin Thomas, and defending Masters Champion Sergio Garcia. The group begins play at 10:53 a.m. on Thursday and will tee off on Friday at 1:38 p.m.

Stanley will play with former Masters Champion Danny Willett and former Auburn All-American Jason Dufner. That group will begin play Thursday at 9:59 a.m. and on Friday at 12:54 p.m. All groups begin at the first tee.

Redman has played in four tournaments so far this year for Clemson and has a 71.42 stroke average. He has had six under-par rounds out of his 12 total rounds this year. The native of Raleigh, NC had a dramatic birdie-birdie finish to give Clemson the championship of the Puerto Rico Classic on February 20th.   His best individual finish of the year is a fifth place at the NIKE Elite in Oregon back in the fall.

Redman, a first-team freshman All-American last year, has a 70.92 career stroke average for 51 rounds and 17 tournaments. He will play one more PGA tour event as an amateur at the Heritage in Hilton Head Island, SC before rejoining the Clemson team for the ACC Championship April 20-22. In March he made the cut at the Arnold Palmer Invitational, the first current Clemson golfer to make a cut at a PGA Tour event since Patton’s 1990 Masters performance.

Stanley is having an outstanding year on the PGA Tour and has already earned over $1.2 million in just 11 events. He has made nine cuts, and had seven top 25 finishes, including three top 10s. He finished tied for fifth at the Dell Match Play in Austin, Texas two weeks ago. He is currently 39th on the FedX cup points list, 36th on the PGA Tour money list and ranked 44th in the world. He is third on tour in driving at 71.85 percent and sixth in greens in regulation.

Notes on Clemson in the Masters

– Redman is the eighth amateur to play in the Masters while still a Clemson student. Chris Patton is the only one to make the cut after shooting 71-73 for the first two rounds in 1990. He finished 74-78 for a 296, eight-over-par and 39th place. He would have won $5,500 if he were in the field as a professional.

– Five Clemson amateurs in a row have failed to make the cut at Augusta. The closest an active Clemson golfer has come to making the cut since Patton was Michael Hoey, who missed the cut by one shot in 2002 after he scored a 148 for the first two rounds.

– Golfers with ties to Clemson have played in the Masters 26 times and 10 have made the cut. The player who has made the most cuts is Lucas Glover (four).