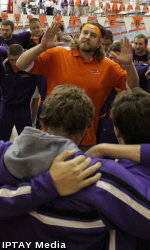 CLEMSON, SC – The Clemson men’s and women’s swimming and diving teams closed out 83 seasons of regular season competition with a sweep of Emory University on Saturday afternoon at McHugh Natatorium. The Tiger women’s team knocked off the Eagles 180-116, while the Tiger men’s team picked up a 174-121 win.

“This was great for Clemson swimming and diving,” Head Coach Christopher Ipsaid. “We took down some records that were owned by gold medalists, NCAA All-Americans, and people who have won NCAA national championships. That shows how competitive this team is, and we’re not done yet.”

Clemson broke five pool records in front of a packed house for Senior Day at McHugh, the Tigers’ home facility that was in use for the first time in more than a year due to renovations. A large contingency of alumni and fans cheered the Tigers to a season-ending victory.

“It was an unbelievable crowd,” Ip said. We wanted to come honor our seniors today. We wanted to honor all the alumni that came back and that hadn’t been here for a while. Hopefully, they saw the competitiveness of the Clemson Tigers here in the pool. Both the men’s and women’s teams swam very, very well.”

Eric Bruck set a pair of pool records to close out McHugh Natatorium. He set his first all-time mark in the 50 free by almost half a second with his first-place time of 19.64 seconds. Two of his teammates, Seth Broster (20.82) and Chris Reinke(20.83), came in second and third, respectively, in the event.

Bruck then finished 45-hundredths of a second ahead of the previous pool record in the 100 free with his victorious time of 44.03 seconds. He was followed in the race by teammates Myles Oliver (46.42) and Lee Groseclose (46.90), who finished in second and third places. Chris Dartalso broke his own pool record with a time of 48.98 seconds in winning the 100 back.

In diving, Brooke George broke the Clemson record in the one-meter with her first-place score of 300.75. Cassie Self (297.53) and Emily Howard (287.25) also established themselves in third and fourth place, respectively, on the all-time list in the event. Howard prevailed in the three-meter with a score of 302.90. She was followed by Elizabeth Tatum (288.70) and Self (280.35) in second and third, respectively.

Kristen Redmond and Tori Cervone each won three events during the meet. Redmond bested her previous season-best time by over six seconds with a 10:13.12 swim to win the 1000 free. She also finished first in the 200 free with a time of 1:52.80, which was followed closely by Kelsey Krauss’second-place time of 1:53.63. In addition, Redmond won the 500 free with a time of 5:03.60.