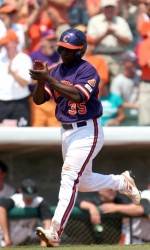 A school-record 11 Tigers were selected in the 2007 Major League Baseball Draft on Thursday and Friday, breaking the previous record of 10 in 2006. The Tigers’ 11 draft picks tied for the second-most in the nation.

Rice led the nation with 14 draft picks, while Clemson, Oklahoma State, and Texas had 11 apiece. Cal State Fullerton and Georgia Tech had 10 each, and Arkansas, Nebraska, Pepperdine, and Texas A&M had nine apiece.

Junior lefthander Daniel Moskos was the #4 overall selection in the first round by the Pirates and was the first of five Tigers selected in the first three rounds.

Clemson led all Division I programs with its five players taken in the first three rounds. Tennessee and Arkansas tied for second with three picks in the top three rounds, while 11 other schools had two picks.

In the third round, a pair of righty relievers were chosen. Junior Alan Farina was the #115 overall pick by the Blue Jays, then senior Stephen Clyne was the #123 overall selection by the Mets.

Clemson’s 11 draft picks in 2007 were also the most-ever in any sport in Clemson history. In 2006, Clemson’s 10 draft picks were the second-most in the nation as well.