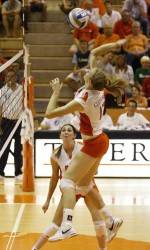 “It’s always good to get an ACC win where you can get one,” said, Jolene Jordan Hoover. “Boston College came in playing very well, especially defensively, which we saw tonight. But, it was really good to get the win and move up in the standings.”

Setter Lia Proctor upped her season average in kills/set by notching 12 this evening to go with seven digs.

Rand’s .696 hitting mark is tied for fifth-best ever by a freshman, and is hitting .541 in ACC matches so far this season (62K-9E-98A). She also had two solo blocks and three block assists to move her to 95 on the season, fifth-most ever by a Clemson freshman.

Didem Ege 28 digs are a three-set high for the senior from Istanbul, Turkey, who now has 2,003 career digs, fifth most in ACC history. She is also the ACC’s career leader in digs/set at 4.86. Ege has her sights set on the ACC record, which sits a little more than 200 digs away.

The Tigers came out strong in the first set, taking a quick 9-4 edge. An Eagle run eventually gave BC the lead at 14-13. With the match knotted at 17, Kelsey Murphy set Adeleye and Proctor on consecutive plays, and Serenat Yaz recorded an ace to put the Tigers ahead 21-17. The Tigers put the first set away, 25-21, hitting a robust .344.

Clemson again took an early lead in the second set, holding a quick 13-4 advantage on seven kills set up by Murphy and four Tiger blocks. The Tigers were able to maintain a cushion throughout the set, playing solid defense throughout the set. They had six blocks and 20 digs in the set, in which BC hit only .130. Clemson took the set, 25-21

Boston College looked like it might take a set back early in the third, trading points with the Tigers all the way to 14-14. However, Clemson used an 11-5 run, fueled by seven kills from four different players to close the set, 25-19. Ege had an outstanding fifth set, recording 11 digs, while Alexa Rand had 6 of her 16 kills in the set, and three in the decisive run.

Clemson will now play host to Maryland on Saturday at 6:00 pm in Jervey Gymnasium, before heading on the road to take on Virginia and Virginia Tech next weekend.