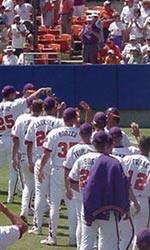 CLEMSON, SC – Fifty of Clemson’s 56 regular season baseball games and all postseason games will be broadcast live on the radio in joint partnership between Clemson Tiger Sports Properties and WCCP-FM (104.9) in Clemson. In addition, the Tigers will have six games televised by either Fox Sports Net South or Comcast/Charter Cable.

Clemson Tiger Sport Properties will broadcast 36 regular-season Clemson baseball games this season, including all 24 conference games. The broadcast schedule also features 12 non-conference games, including all four games with South Carolina, two games with Georgia, one game each with Coastal Carolina, Winthrop, Wofford and a three-game series with Maine, the alma mater of Clemson head coach Jack Leggett. The network will also broadcast all postseason contests, including all games the Tigers play at the ACC Tournament and in the NCAA Tournament.

“We’re excited to be doing all 24 ACC games as well as all four games against South Carolina,” said Don Williams, general manager of Clemson Tiger Sports Properties. “This could be one of the most successful seasons in Clemson history and we are pleased to be the broadcast home of the Clemson Tigers.

Additionally, WCCP in Clemson will broadcast another 14 games giving the Tigers a radio presence in 50 of its 56 regular season games. Ed Jensen will handle the play-by-play duties for games on WCCP.

“Not only are we excited about the team and one of the best schedules in recent history, but we are also proud of the radio broadcast schedule between Clemson Tiger Sports Properties and WCCP,” said Dwight Rainey, senior associate athletic director. “It gives our fans the chance to follow what should be a great year for Clemson.”

Clemson, ranked as high as second in the nation by Baseball America, opens play Feb. 22-24 with a three-game series vs. Auburn at Doug Kingsmore Stadium.