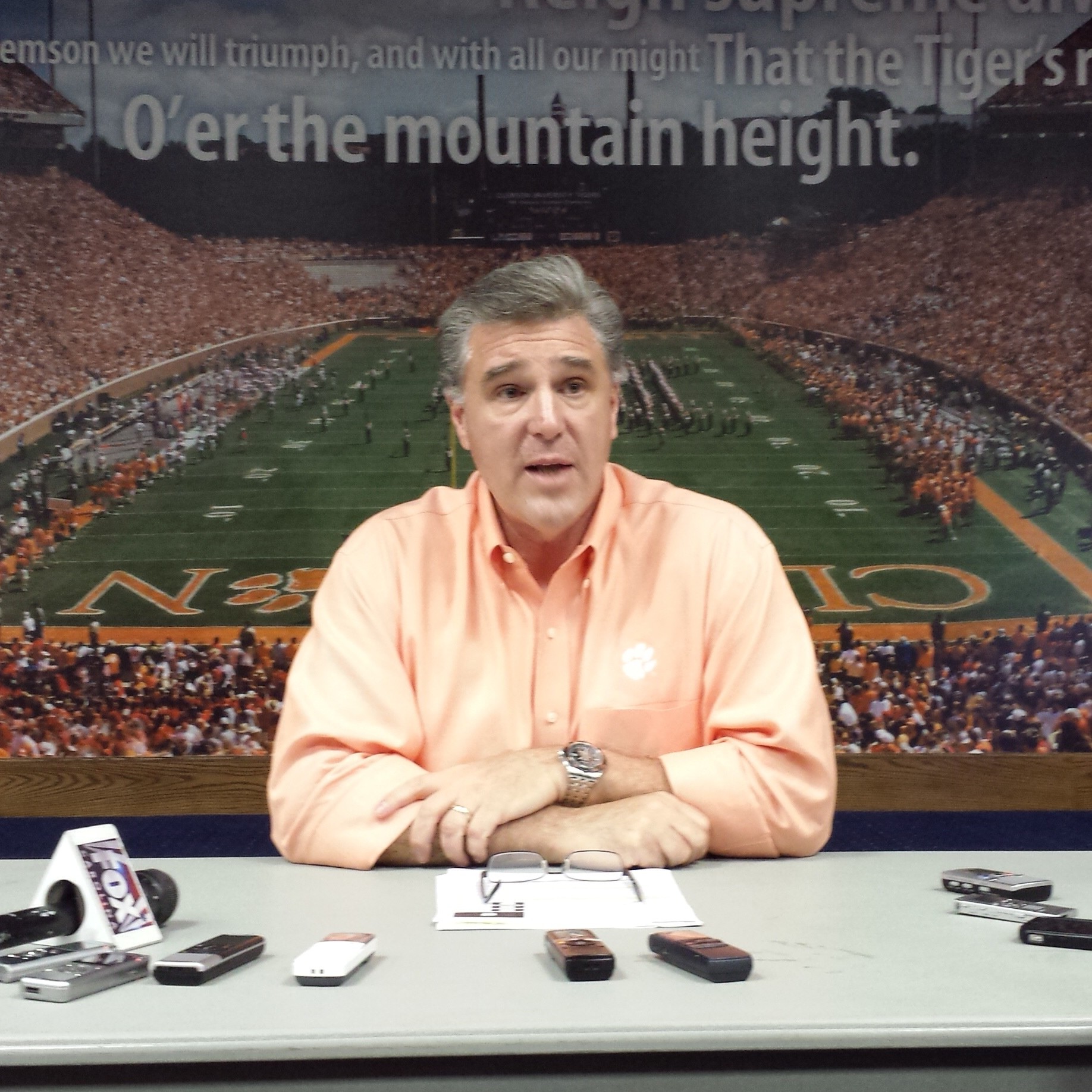 CLEMSON, S.C. — Director of athletics Dan Radakovich held an informal gathering with several members of the local media Wednesday. In the question and answer session, Radakovich discussed several topics of interest, including today’s announcement of the Auburn football series, his role on the College Football Playoff committee, autonomy within the power conferences, updates on facilities, and much more.

Below are some excerpts of today’s media gathering:

On today’s announcement of a home-and-home football series against Auburn:

“We had been talking with Auburn for a while. We had some discussions about starting the 2016 season in the Chick-fil-A Kickoff Classic. But as we looked at both teams’ schedules, playing a home-and-home in 2016 and ’17 was the most beneficial to both parties. Notre Dame will be here in 2015 and we don’t visit them until 2020. So, we had a gap. Now we’re on the search for a home-and-home in 2018 and ’19. We want another quality opponent to fill that slot. We’re happy to get Auburn on the schedule. It’s going to be a great series. The two schools are relatively close, so both fanbases can travel back and forth.”

Outside of Auburn, what other teams are you looking at potentially scheduling?

“We’re really looking at any team in the big five conferences. Some teams are full and have their schedules set. The Big Ten is unique. Some have five home games in certain years. But a segment of them have four as well, because they play nine conference games. We need the home games in the odd numbered years. Kyle Young does a lot of this within our department. In concert with ESPN — who has the master scheduling list for everyone in college football — we look and see who’s available based on number of home games they need. Then you see if it makes sense geographically. It’s not as attractive to go to the West Coast, as opposed to finding someone a little closer. Really it boils down to whether or not you need a game in that particular year, and if you can play at home or on the road, and does that match up with our needs. Auburn certainly fit in ’16 and ’17, and we’re on the hunt right now for someone in ’18 and ’19.”

What is your role as a member of the College Football Playoff committee?

“As a committee, we’ve had three meetings thus far. We’ve begun to go through the process of creating a top 25 poll, and how we will do that. We will begin publishing that at the end of October, and it will run through the conference championship games. We’ve done some simulations. Not next week, but the week after, we have another set of meetings. We’ll get more in-depth about the actual selection process, because that will be our final meeting in person before we get together in October to actually publish the first poll. We’ll learn a lot more as we go through this next exercise. I’m sure Bill (Hancock) and Jeff Long will keep everyone up to speed. We want this to be as transparent of a process as possible.”

What are your thoughts on the big five conferences seeking more autonomy?

“We’ve been talking about that for a while as athletic directors. Now it’s come to fruition. The Board of Directors will have a vote on August 7 to move this initiative forward. With anything new, there are growing pains associated with it. We’re looking at autonomy to help the student-athletes under our umbrellas to have a great experience, whether that’s through additional cost of attendance monies, to better health and wellness, to insurance — all of those things that have been discussed by the news media. The real rubber will hit the road when those five conferences come together and discuss autonomy and how it will move those new pieces of legislation forward. I’m excited by the opportunities that might exist, but I have no idea how that process would work from an implementation perspective. Those things will come after the August 7 date passes. We all anticipate the NCAA board will ratify the autonomy for the big five conferences. Then we’ll work on how the structure of legislative opportunities will be put in front of that group first.”

On recent contract extensions for Dabo Swinney and Brad Brownell:

“You have to look at where you are as a program, and where you think you’re going to be in the near term. I’m one of the luckiest guys in America. I’ve got Dabo Swinney and Brad Brownell as coaches of my football and men’s basketball programs. They’re quality individuals and do things the right way. They create positive cultures within their programs. We’re in a good spot right now.”

What is the latest news with regards to facility renovations?

“Baseball renovations will start in two weeks. We had a little hiccup with some of the pricing, and that cost us some time. But it taught us a good lesson. So we’ll start construction in August, and that will go through the season. We won’t be done by February. But we’re trying to get the functional parts the team will need available at the beginning of the year. The new seats behind home plate will be one of the first things done. As we move forward with Littlejohn, the new football operations center, the oculus, and the club seats — we have worked with the university and made it clear to them that once we hire the architect, we need the contractor brought on board quickly. We don’t need to be going down a path that causes us delays like we experienced with baseball. Some of the other projects may face tighter time schedules. We need to give our board and our fans a good idea of when things may open, and what it’s going to cost.

“We just brought a young man on board as an assistant athletic director for facilities, Joe Simon. He comes to us from Central Florida, where he helped build their football stadium and renovate their basketball facility. He comes with relevant experience to some of the bigger projects we are working on right now.”

Where will men’s and women’s home basketball games be played in 2015-16?

“We’re pointing toward the Bon Secours Wellness Arena, especially the men. We’re still looking at which venue would give our women the best advantage. We’ll have a number of double-headers at Bon Secours. We’re excited by the opportunity of going to Greenville, because it exposes Clemson and ACC basketball to the area. We hope some of those fans then come back to the rebuilt Littlejohn Coliseum when it opens in November of 2016. Everything associated with the timing of it (building a new arena) is moving along well. We’ll also have a practice facility associated with it as well, which is exciting.

“We’re working on potential practice facilities while we are undergoing renovations. We have a few opportunities on campus. Coach Brownell and Coach (Audra) Smith see what’s coming, and they understand there will be a little bit of a bump in the road. The end result will be really positive for both programs. We’re working on finding a spot here or relatively close to campus for both teams.”