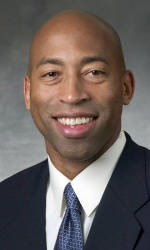 Q: What are your thoughts on joining the Clemson staff under Coach Brownell? A: “First and foremost, I’ve got a great deal of respect for Coach Brownell. I’ve never worked under him, but I’ve always been around him through different associations. He seems like a guy that’s always on the right path, in terms of trying to do things the right way. He’s a great coach and teacher. He will install discipline in the program. Coach Brownell has always won every place he’s been.”

Q: What specifically attracted you to work at a place like Clemson? A: “One of the things that appealed to me is that we did come here and play when I was at Purdue. I thought it was an exciting environment. That’s something you always look for in a program. What’s the home environment going to be like? Is it intimidating? Is it loud? Are the fans into it? More importantly, are the students into it? When we played here as an opponent, that was a great experience. You could feel the great fan support. Then, I had a chance to take a jog around campus. I thought it was a beautiful campus. I got a chance to touch Howard’s Rock and go storming down the Hill. The people here were real hospitable.”

Q: How much did your four-year stint with Purdue mean to your career? A: “First of all, I think the world of Coach (Matt) Painter. He does a tremendous job. He does things the right way. I learned a great deal under him while I was at Purdue. I think it speaks volumes for Clemson, in terms of me coming from a team that is projected to possibly be the preseason No. 1 team in the country next year. That’s how much I think of Clemson, how much I think of Coach Brownell, and the guys here.”

Q: Why do you think Coach Brownell is a good fit at Clemson? A: “First of all, I think he is a sincere person. Phoniness can be picked up on right away, especially in the South. People want you to be real and direct with them, and that’s the type of person he is. More importantly, he’s a good person. A lot of times all you hear is, `Can he coach? Can he recruit?’ But, Brad is a people person because he cares about the people in this program. I think that will shine through here at Clemson.”

Q: Do you have a sense of familiarity with Coach Brownell, given you worked under Royce Waltman – his head coach when he was a player? A: “There’s no question about it. I was fortunate to work with Coach (Dick) Bender at Indiana State. My time with him was really good. We had a great bond. We learned a lot from each other. I really respect the way he does things. Having that association with Coach Brownell allowed me to get to know him, it gave me a chance to meet him. From a distance, I always thought to myself, `He’s a good guy. He’s going to be successful.’ I thought it would be a great opportunity to learn from him.”

Q: What do you think of the returning players and current state of the program at Clemson? A: “The first thing you notice is that we have some senior leadership and some veterans on the basketball team. The whole key is that those guys have been playing a particular way. No matter what you do – as far as a coaching change – it will never be the same. What we have to do is gain these guys’ trust. We have to get them to buy into the way that Coach Brownell wants to play. We have to make them understand that, in looking at his track record, if you buy in and do those things the right way, you’re going to be successful as a player. All of these guys that come to play at Clemson and in the ACC, their goal is to play professionally. Whether it’s the NBA or overseas, they’ve got to trust that we’ve got that same goal for them as well. If they trust us and have two feet on board, we’re going to be good.”