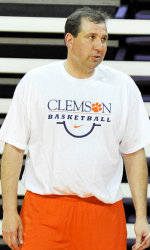 Q: What are your thoughts on joining the Clemson staff under Coach Brownell? A: “I’ve been doing this for about 20 years at the Division I level, at all different levels of Division I basketball. To get to the highest level in Division I is something you always hope for. A lot of good coaches never get this far. I want to be here for a while. With all my experiences, I think that will help me be a successful coach here at Clemson. I’m really looking forward to the challenge. There’s a little bit more pep in my step. I’m excited.”

Q: What do you think makes Coach Brownell such a good fit at Clemson? A: “He has a good winning formula. He adapts to his players. He has core values that are very similar to the values held by this university and this athletic department. And he’s not going to waver on that. He wants guys that are coachable, guys that want to get better, guys that want to get an education and work hard. I think that’s what Clemson was looking for in a coach, and Brad is very good in all those aspects.”

Q: What are your thoughts on coaching within the ACC? A: “I grew up in middle school and high school in Virginia, so I saw the ACC all the time. You never get into coaching because you want to get to the ACC. You get into coaching because you like working with players. I have always had a good relationship with the players, especially with developing them. When you get into the business, you want to be successful. This is the next challenge. I’m here now, and sometimes it takes longer. I think all of my experience will help me be successful.”

Q: What are your thoughts on Clemson’s program and the success it’s had in recent years? A: “The big thing is getting the guys in the program to buy into what we’re all about. With the first couple of workouts we’ve had, it’s going great. It seems like the players are very responsive to our teaching methods and skill development. We’re pushing them harder than most guys like to be pushed. It’s been a good first couple of weeks. Sometimes you take over a job, and you’re not sure that those players are going to buy in. They’ve bought in pretty quickly – it’s been a good transition period. To take it to the next level, you’ve got to make your players better and you’ve got to recruit to what you think your needs are. I think there are some needs we have to address, and I’m not sure we’ll do it during this late signing period or not. We took the job late, so we’re not going to be handing out scholarships. We have to see what’s out there with the class of 2011 and 2012. But, we have a good team. We have some good parts. We have to find guys that will fit in with what we’re trying to do down here in Clemson.”

Q: What are your initial impressions of some of the returning post players on Clemson’s roster? A: “The biggest difference I’ve seen so far in coming from Wright State, the mid-major level, has been the post players. Their size, strength and athleticism is a little different. But, different in a good way! All those guys have different skill sets, and they have to improve on them. They’re post players, but they’re good players, period. They will be around the basket, but they’ll be outside as well. We’ll work on reversing the ball, work on their 17-footers, and so on. They’re excited to have a guy like myself, someone that’s been through the wars down there. I was a pretty successful player way back when at Richmond. I feel like I’ve earned their respect. We’re out there working with our guys. We sweat with them, push them, do things to make them better and challenge them. I think they’ve seen that already. Some guys need confidence. Some guys just need to play more to see that they can be successful.

“Jerai (Grant) is quick and athletic; he can be a post driver away from the basket. I’m going to be working with Bobo (Baciu); we have to get some minutes from him. Right now, we only have four true post players. Bryan (Narcisse) is a hybrid kind of guy. I’m not sure what will happen with the rest of our recruiting class, but we’ve got four guys right now and we have to build them up.”

Q: What is the key in developing post players? A: “It’s a combination of different things. You obviously want self-motivated players. You want guys that want to be good, because then you just tweak some things, work on some mechanics and footwork. But, you could also have guys you have to motivate. You have to find out what motivates each player. I wish we had more time to work with them (in individual workouts), so we could get to know them even better. You get to know them over time, through player workouts, and that’s when you learn more about each guy. Development includes going into the gym and working – it could be a half hour, 45 minutes, or an hour. You’ve got to keep working and grind it out, and then people will see things in the long run as you make yourself a better player.”