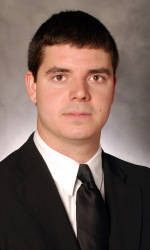 Q: What are your thoughts on returning to your ACC roots? A: “Being a Raleigh native, I grew up around the ACC. To have the opportunity to be in the ACC with Coach Brownell is a great honor. We’re excited about the opportunity to take Clemson basketball to the next level.”

Q: What was the appeal of joining the Clemson basketball program? A: “I think Clemson is a great job. I’ve been through here several times. Will Wade (Clemson’s director of basketball operations in 2006-07) is a good friend of mine. I’ve been here doing the camp circuit many years when I was in college. I’ve been thrilled with everything Clemson has to offer. Coach Purnell and his staff did an unbelievable job getting this program to its current level. We’re going to have to bust our tails every day to keep it there. The presence they had, recruiting-wise, in the Carolinas and Georgia, is something we’re going to have to maintain. The program was run at an unbelievably high level and it’s going to have to continue to be that way to compete with the upper echelon of the ACC.”

Q: What are your thoughts on the returning players you’ll get to work with at Clemson? A: “We’ve got an experienced group coming back. Any time you have guys coming back from an NCAA Tournament team, there’s always a hunger to get back and go further than the year before. We’ll have some more guys in the fold next year. Some guys will have to play more minutes than they’re used to. Some will have a little bit of a different role with the new coach. So far, everything’s been great. I think guys will buy into the team concept to keep Clemson in the upper echelon of the ACC.”

Q: Why do you think Coach Brownell is a good fit with Clemson? A: “Coach is a down home guy from Evansville, IN. He’s going to eat up the “mom and pop” places around town. We’ve been to Mac’s Drive-In a few times already. It’s a great fit, because he wants to get to know people and they want to get to know him. It’s a two-way street. In terms of his coaching ability, I think his record speaks for itself. He coaches with an unbelievable energy and passion. His attention to detail sets him apart. Our defense at Wright State was in the top 50 every year he was a head coach. That’s something we take pride in, and that’s not going to change now that we’re at a higher level.”