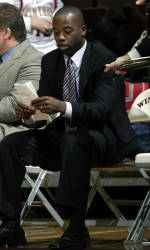 Q: What are your thoughts on joining the Clemson staff under Coach Brownell? A: “I’ve been following Brad’s career for eight years – the four years he was at UNC Wilmington and four years at Wright State. I knew he was really successful. I knew he was a winner. In order for me to leave Wichita State, it had to be a unique situation. It had to be with a guy that was a really good person and a really good basketball coach, who had a chance to be successful. It’s a dream come true because I’m from Charleston. Clemson wasn’t going to hire anybody if they weren’t a good guy and successful. I think they made a great hire, and I’m excited about being back here in the South.”

Q: What are your thoughts on coaching in the ACC? A: “I remember, as a kid, watching Christian Laettner make that last-second shot against Kentucky. So I’ve really followed ACC basketball over the years. Rick Barnes, what he did here at Clemson, was unbelievable. I remember watching Terrell McIntyre and Greg Buckner. I played against Harold Jamison for two years in high school. I really followed the program. If there was one school that I was going to come to in the ACC that I felt I could be successful at and really embrace, it was Clemson.”

Q: What are your initial impressions of the returning players? A: “I feel really good about the situation here at Clemson. I watched Clemson basketball a lot last year. We’ve got a lot of pieces that return. Obviously, we’re going to play a little bit of a different style. Once we get around the guys and have a chance to sweat with them, develop them, and put a system in – I think we’ll have a chance to be competitive every night.”