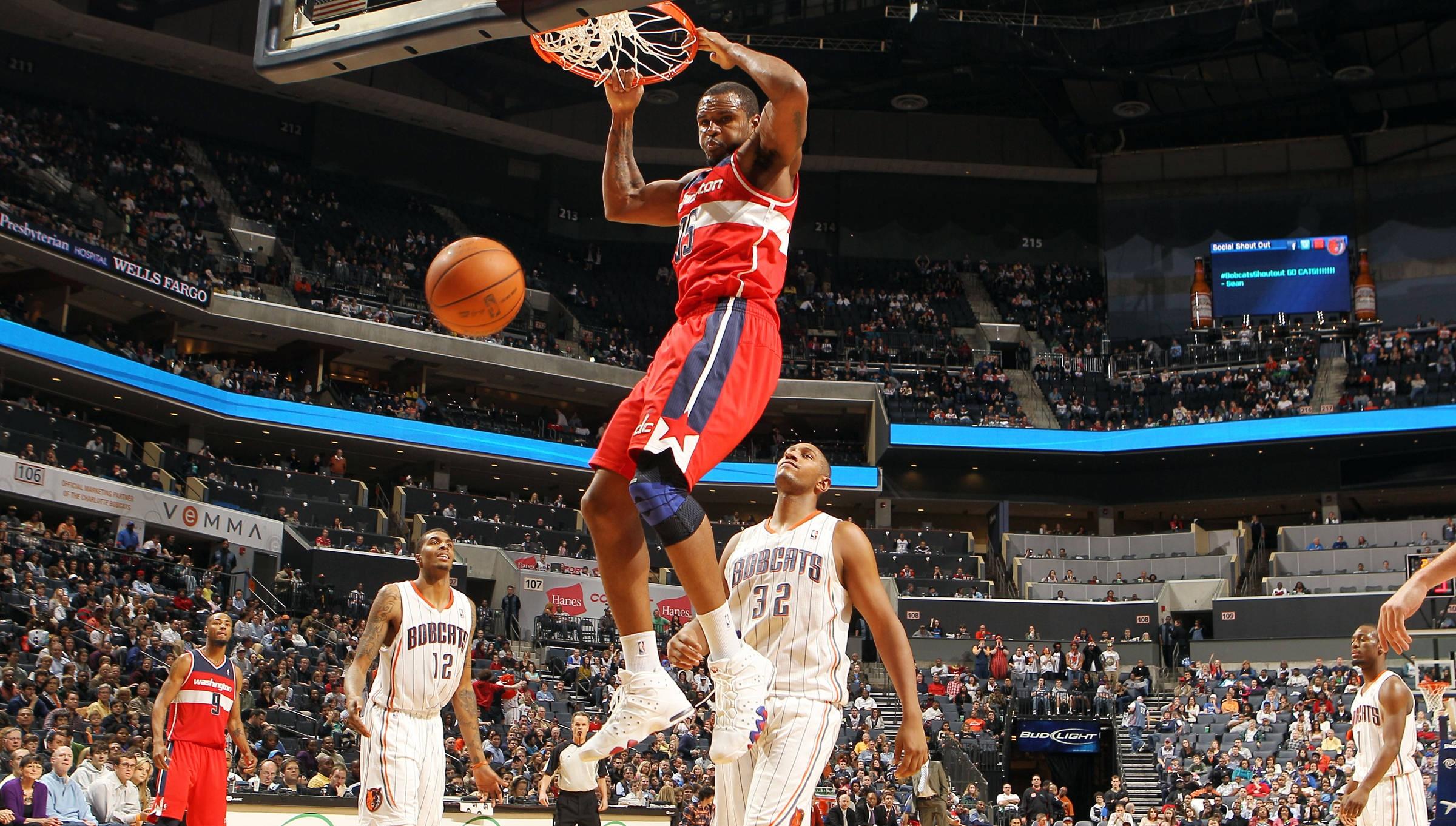 CLEMSON, S.C. – Former All-ACC standout and 2010 first-round draft pick Trevor Booker helped the Washington Wizards to the second round of the NBA playoffs with a series-clinching 75-69 win over the Chicago Bulls on Tuesday. Booker started 134 consecutive games in his Clemson career and ranks in the top five in school history in points (1,725) and rebounds (1,060).

Booker averaged 5.6 points, 6.6 rebounds and 1.6 blocks per game in the five-game series. He started Game 4 in place of suspended regular starter Nene Hilario, earning the first start by a former Clemson player in an NBA playoff game since Greg Buckner for the Denver Nuggets in 2006.

In Tuesday’s series clincher, he posted six points, seven rebounds and three blocks – including this ‘Block of the Night‘ according to NBA.com.

Associate Athletic Communications Director Philip Sikes caught up with the Whitmire, S.C., native Wednesday afternoon to get his thoughts on the series, how he has settled into his role, his advice to departing junior K.J. McDaniels and thoughts on the progress made by Tiger basketball this past season.

Q: Last night the Wizards won their first playoff series for the franchise in several years – was it a celebratory locker room or business-like approach?Booker: “We were definitely excited after the win. For a couple of guys, it was our first time in the playoffs. And it was our first time making it to the second round, for some of us. We’ve come a long way since I’ve been here in four years. The first three years, we struggled. Making it to the playoffs was an accomplishment, but making it to the second round is huge for us right now.”

Q: At what point this season did you start to believe you had a special team capable of achieving a high like this?Booker: “Last year, our goal was to make the playoffs. That didn’t happen. So this year, we knew we had more experience coming back. The young players had to grow up over the course of the season. The experienced players helped the young ones grow up.”

Q: In your fourth season in the league, you’ve been used as a starter and a primary reserve. How have you settled into your role on this team?Booker: “I’m down for whatever my team needs, whether it’s starting or coming off the bench. Sometimes a player goes down with an injury and you have to step up. That happened to us when Nene went down in the regular season, unfortunately. They needed me to step up, because he’s such a big part of our team. But I was ready, and the other guys helped me out a lot.

“Then the other night when he was suspended, we were ready since we played the last 21 games of the season without him. We all knew what we had to do to win. Everyone did a good job of stepping up. Whenever my number is called, I’m ready.”

Q: I’m sure you’ve heard that the broadcasters had high praise for your level of play throughout the series. What does it mean to you personally to receive the praise?Booker: “It’s great to hear, because I’ve worked so hard for it. Sometimes, players like me may go unnoticed. A lot of people just like scorers, but to see someone like me who works hard and hustles the way I do, it feels good.”

Q: As you progress into the second round, what’s the key to advancing against either the Atlanta Hawks or Indiana Pacers?Booker: “Just keep playing the way we’re playing – as a team. Every night, someone different steps up. It all starts for our team on the defensive end, and with the little things like pressuring the ball, attention to detail. I think remaining focused throughout the series should get us to the next round.”

Q: K.J. McDaniels recently told the media that he reached out to you when he was making a decision on his future. What did the two of you talk about?Booker: “Basically, I told him to finish the season strong. I told him not to worry about any of that stuff until the season ends. Then just sit down with your parents and talk about it. Talk to the Clemson staff and if you feel like you’re ready, you should go. I wish him the best of luck. I know he’s going to be a good NBA player.”

Q: Having seen him mature into the type of player he became this past season, what do you see for McDaniels as a future NBA player? Booker: “His first year or two, I see him as a glue guy. He can be a defensive stopper, rebounder, shot-blocker. But as he works on his game, I expect his role to expand and I can see him being one of the top players in the league one day.”

Q: Did you catch a lot of Clemson games this past season, and what were your thoughts on the turnaround the team made from 2012-13? Booker: “I caught a good bit of games. The coaching staff did a good job. Coming into the season, I wasn’t sure how they would do. Coach Brownell and his staff did a very good job preparing the guys for the season. I was actually very proud of them.”

Q: As a post guy I’m sure you closely watch the development of guys in that position now for Clemson. What are your thoughts on the player – Landry Nnoko – who wears the jersey you made famous? Booker: “He made tremendous improvement from last year to this year. You can see a big difference in him. He’s a tough guy down low, a gritty guy. I’m looking forward to seeing him play the next couple of years.”