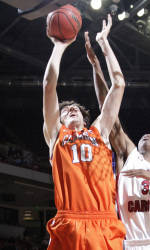 On Thursday, Catalin Baciu, who talked about his recent trip overseas with Athletes in Action. Baciu, a 7-foot-2 center who appeared in a career-high 23 games last season under Brad Brownell, also talked about his goals for 2011-12, his off-season development, and about some of the differences between U.S. culture and that of his home country of Romania. Read below to see what the Tiger big man had to say.

Q: Recently you took a trip with Athletes in Action to China – tell us what that experience was like for you?

Baciu: “The entire trip lasted about three weeks in June – we spent a week training (at Athletes in Action headquarters) in Xenia, Ohio and then two weeks in China. The training camp was designed to have us come together as a team, develop some chemistry, and conduct bible study because this was a mission trip. We played seven or eight games, including one against the Under-22 National Team. The only game we lost was to the Beijing Ducks – we beat them once and they beat us once. Our team clicked right away.”

Q: Did you have any big games for the team?

Baciu: “We didn’t really keep statistics, but I played pretty well against the national team. I scored double digits in both games against the Beijing Ducks, which was good for me considering they had a 7-foot-9 player. I was definitely not used to that, but almost all of the teams had players taller than me. All the teams we played, except the national team, were members of the CBA (Chinese Basketball Association). Beijing had three or four American players during the season, but they are not with them in the summer. I think Stephon Marbury played in the CBA last year.”

Q: Did you form a bond with any of the other guys on the team?

Baciu: “Matt Dickey from UNC Asheville was my roommate. He’s a great guy, and he’s a great player. We saw him play in Dayton this past season, when UNC Asheville played prior to our game against UAB. He’s a good shooter, but he could also drive the ball, too.”

Q: How did the trip with AIA benefit your game?

Baciu: “It boosted my confidence. The trip helped a lot. I was able to play about 25 minutes per game.”

Q: What is your weight currently, and do you have a target weight you’re shooting for this season?

Q: What skills have you been working on in the off-season?

Baciu: “I’ve been doing a lot of the same drills this summer that I did with Coach (Mike) Winiecki during individual workouts. I continue to work on a lot of shooting. I’m trying to expand my moves around the basket, hook shots – that sort of thing.”

Q: Tell us about the origin of the nickname `Bobo.’ Where did that come from?

Baciu: “Bobo is short for the word bobocel. In Romania, it means flower sprout. It’s a word used to describe something new or fresh. I picked up the nickname within my first two weeks playing basketball. I was probably 15 years old, playing for Romania’s Under-17 Team. I was a freshman, the youngest guy on the team. I had no idea how to play basketball, either.”

Q: What were some of the biggest cultural differences after first coming to the United States as a high school junior?

Baciu: “In America, everything looks the same. All buildings look the same it seems. For example, the restaurants here all look the same. If you go to my home country, none of them look the same. Every building has its own design. I lived in a city back home, so I was used to getting on a bus because it was cheaper that way. When I came here, I couldn’t get anywhere without having a car. Romania is about the size of South Carolina, so it’s a small country.”

Q: How many different languages can you speak?

Baciu: “I speak Romanian, English and Spanish primarily. I can dabble a little in French and Italian, too. I understand those languages better than I can actually speak them.”

Q: Academically, how are things going for you at Clemson?

Baciu: “I started off as a computer engineering major. What was I thinking? I am now on track to graduate in sociology in May.”

Q: Do you have a fond memory that sticks out in your three years at Clemson?

Baciu: “When I was a freshman, the entire front row of students at Littlejohn Coliseum spelled out `We love Bobo’ on their backs. They were people I didn’t even know, obviously. I believe that was the Maryland game, when we beat them pretty handily.”

Q: What are your expectations for the team this upcoming season?

Baciu: “After talking with the rest of the seniors, we decided that we are going to lead by example. We want to teach the five freshmen (who enroll next week) as quickly as possible, and have them playing at the highest level possible. It should be fun.”