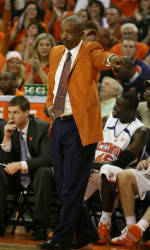 ST. LOUIS, MO – Clemson basketball coach Oliver Purnell is one of 10 finalists for the 2009 Henry Iba Award. The honor is presented each year to the National Coach of the Year by the United States Basketball Writers Association.

Purnell is the only ACC coach on the list. There are three Big 12 coaches on the list, including Mike Anderson of Missouri, Bill Self of Kansas and Jeff Capel of Oklahoma. The other coaches on the list are Stew Morrill of Utah State, John Calipari of Memphis, Brad Stevens of Butler, Mike Montgomery of California and Jamie Dixon of Pittsburgh. Not of the 10 have won the honor previously.

Purnell has taken Clemson to a 22-6 record this year, including an 8-6 mark in the Atlantic Coast Conference. The Tigers are ranked 18th by Associated Press and 19th by USA Today Coaches poll this week, the 12th consecutive week Clemson has been in the top 25.

Clemson has six wins over teams currently in the RPI top 50, including a 27-point win over third ranked Duke, the worst loss for the Blue Devils in 19 years. The Tigers other top 50 victories are over Miami (FL), South Carolina, Illinois, Boston College, and Temple, all took place away from home.

The presentation of this year’s award will take place on Friday, April 3 at the USBWA’s annual awards breakfast at the downtown Detroit Athletic Club in conjunction with the Men’s Final Four. The breakfast will also honor the winner of the Oscar Robertson Trophy, the association’s player of the year, as well as the 1979 Michigan State national championship team that was led by Earvin “Magic” Johnson.

The Henry Iba Award is voted on by the entire membership of the association, which consists of nearly 800 journalists.