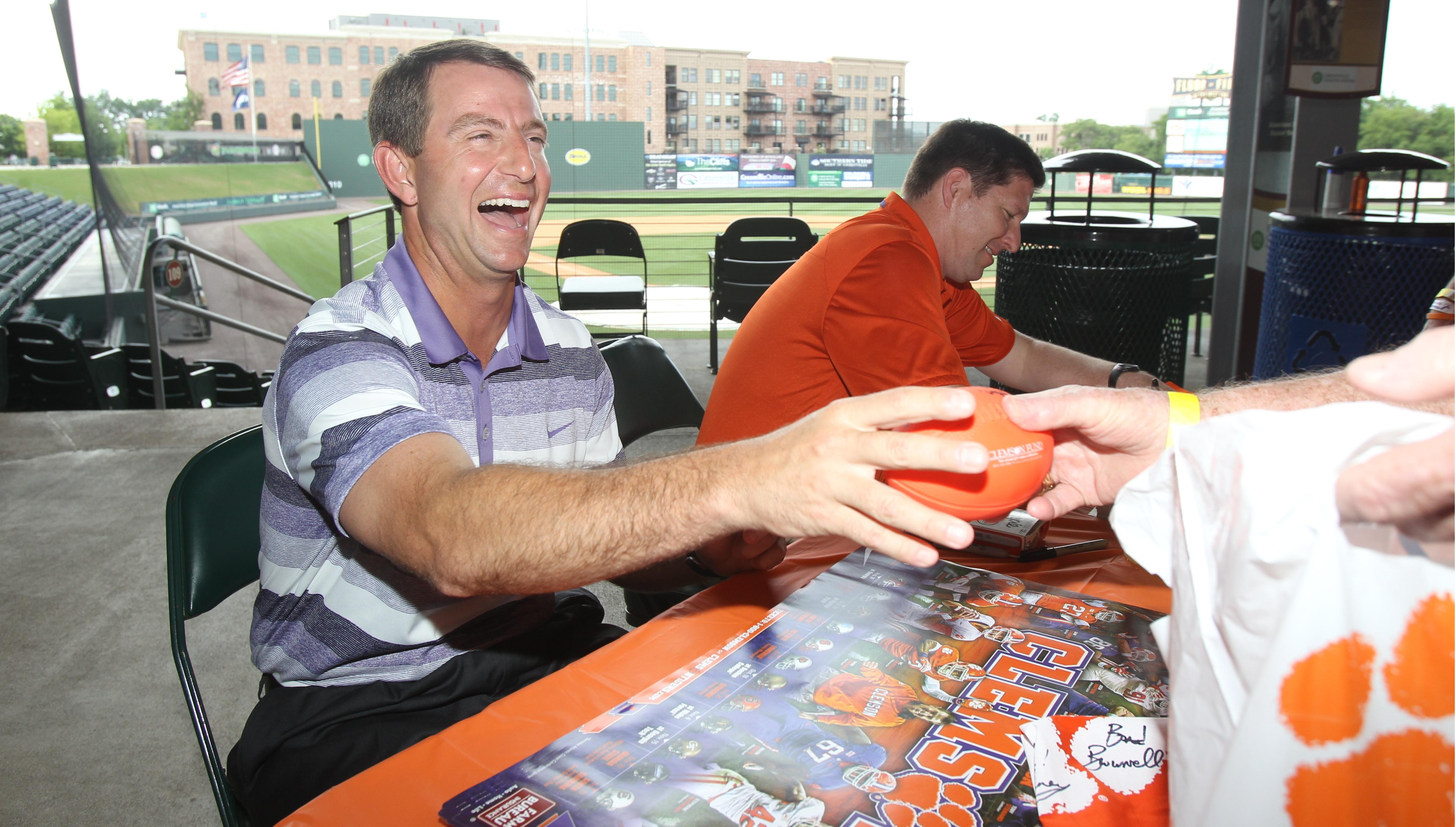 GREENVILLE, S.C. – The Prowl & Growl tour sends Clemson coaches on the road to tell fans about their teams, but Dabo Swinney said Wednesday’s stop at Fluor Field felt more like a “home game” to him.

“We get to see a lot of familiar faces,” the head football coach said before the event. “We get to know a lot of the people in Greenville, Anderson, Clemson and Seneca that will come out for this one. Clemson is a grassroots program, and anytime you can come out and rub elbows with the folks, that’s what it’s all about because they are the ones who make it happen.

“I get the privilege of leading the team, but our fans are the ones who really make the magic happen in Death Valley.”

The 2014 Prowl & Growl tour kicked off April 14 in Greenwood, S.C., and exactly a month later it rolled into Greenville for the seventh of 10 stops on this year’s slate.

Prior to taking the stage, Brownell gave a quick scouting report on Avry Holmes, the point guard from the University of San Francisco who transferred into the program earlier this month.

“We really like him,” Brownell said. “I think he’s a guy that shoots the ball very well. He has two years of experience in a good league, the West Coast Conference, at San Francisco. And he’s a guy that can play with a lot of different people because he can shoot.

“Obviously, we have a senior in Rod Hall who has had a terrific career and we think is going to be a big leader for us and we’re going to lose him, and we just felt like we needed to add an older player to kind of help in the transition.”

The Tigers are also going through a transition as they adjust to life without All-ACC wing player K.J. McDaniels, who reported to Chicago for the NBA Draft Combine earlier this week.

Brownell said he hopes McDaniels will be a first-round pick in June’s draft and also believes some NBA front-office personnel could have the high-flying small forward on their “wish list” because of his upside.

“A lot of people are really excited about him,” Brownell said. “His athleticism is off the charts, and I think people are excited by his development and how much he improved over the last two years and what he can be.”

Another update Brownell gave was on rising junior center Landry Nnoko, who had surgery to repair a torn meniscus last week.

“Everything seems fine,” Brownell said. “It was a little bit bigger tear than maybe they originally thought, but the doctors did a great job, and it’s just going to take some time for him to heal.”

While Brownell is hoping one of his players will soon be drafted, Swinney had five of his selected in last week’s NFL Draft.

Only 1.67 percent of all college players get the chance play in the NFL, and according to Swinney, that makes the fact that Clemson had five draftees and six more players sign free agent deals all the more impressive.

“We only had 10 scholarship seniors and had three juniors come out, so 11 of those 13 eligible guys are getting opportunities to play at the next level,” he said. “It’s very rewarding. And to know that they all also got their degrees, they’re very well prepared and it’s exciting. I know they’re going to take full advantage of this opportunity.”

And Clemson players aren’t just getting drafted by the NFL with regularity; they are sticking around in the league.

Swinney said “about 81 percent” of the Clemson players who have gotten drafted or signed free-agent deals since he became the Tigers’ coach have made an NFL roster.

“That’s a credit to our culture that we have and the type of job that our coaches have done in preparing these guys and just the environment at Clemson that they’ve kind of transformed them as they’ve prepared to go onto the next level,” he said.

“Buffalo, if you’ve been up there, it’s kind of a blue-collar town,” Swinney said. “It’s not very complicated up there. They take great pride in their program, and it’s similar to Clemson in a lot of ways in that regard.