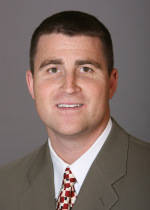 “We feel that we’ve added one of the best and most qualified strength & conditioning coaches in the country,” said Oliver Purnell, head men’s basketball coach. “The fact that he is a homegrown, Clemson guy makes it all the more special.”

Greene arrives in Clemson after a one-year stint as the men’s basketball strength & conditioning coach for Stanford under first-year Head Coach Johnny Dawkins. He designed and implemented all aspects of the Cardinal players’ strength and speed development programs, as well as overseeing the team’s nutritional needs. Stanford posted a 20-14 record and advanced to the College Basketball Invitational.

Prior to his lone season in Palo Alto, Greene served as the director of strength & conditioning for Charlotte from 2003-08. He worked primarily with the men’s basketball team, under coach Bobby Lutz. He also worked closely with the men’s golf team while at Charlotte.

Greene was an assistant strength, speed & conditioning coach at the University of Arizona for two years, prior to his time with the 49ers program. At Arizona, he assisted with the implementation of strength, speed & conditioning for the football team, while serving as the head strength coach for the women’s basketball and women’s soccer programs. He also directed the department’s nutrition and supplementation program.

The Peachtree City, Ga. native served as a student and graduate assistant under Joey Batson from 1995-99. He was in charge of strength & conditioning for golf, women’s soccer, men’s tennis, and volleyball. He also assisted with football during his time at Clemson. He is one of several former student or graduate assistants under Batson to have been named director of strength & conditioning at another Division I institution.

Greene earned a bachelor’s degree in health science from Clemson in 1999, with a minor in sport management. He received a master’s degree in 2000 from the University of Minnesota in applied kinesiology and sports management. Greene holds numerous certifications and memberships, including the National Strength & Conditioning Association (NSCA). He also recently earned certification as a performance enhancement specialist by the National Association of Sports Medicine (NASM).

Greene is also one of only seven internationally certified Level 5 coaches through the Charles Poliquin Strength Institute (PICP).

Greene is married to the former Jennifer Lynn Deyo.