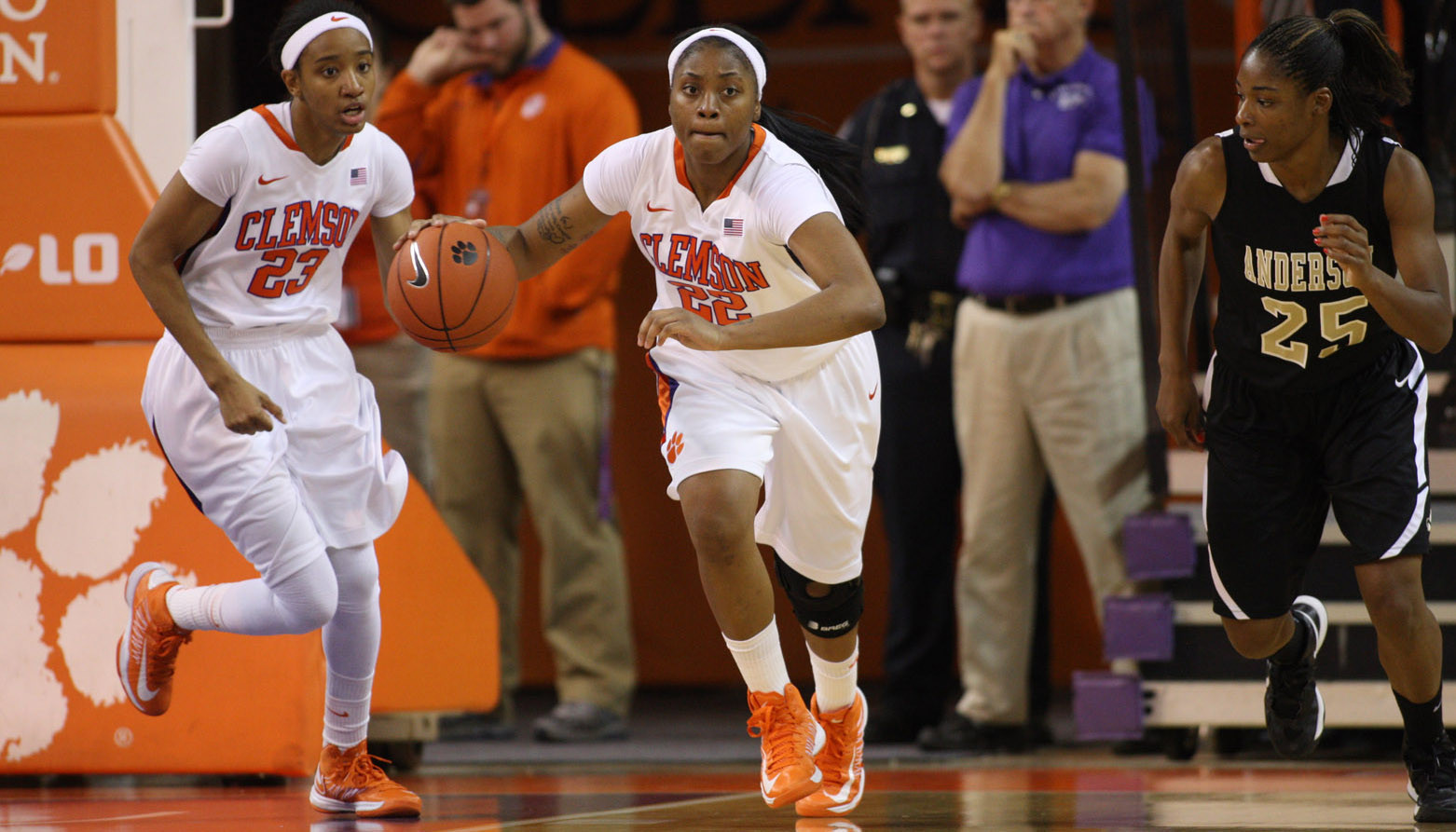 Presbyterian College Knocks Off Clemson at the Buzzer

The Lady Tigers shook off a nine point deficit with 5:46 to play to tie the game with 12.2 seconds remaining on a pull-up bank shot by Grant. Out of a timeout, Sharece Smith, who played high school ball at nearby DW Daniel High School, dribbled past Clemson’s man-to-man pressure and found David in the left corner. The shot swished through as the horn went off.

“We started seeing a lot of fight. We have to get that fight consistent all game,” said Itoro Coleman. “We’ve got to find a way to play [like that] 40 minutes. Danaejah and Jonquel really stepped up, and I thought we executed better down the stretch.”

Prior to that hoop, Clemson had not allowed a basket for 5:45 of game clock, when the Blue Hose took a 42-33 lead. Defensively, the Tigers held the Blue Hose to .288 shooting and won the rebounding battle 48-36, but couldn’t get much going offensively, going 0-11 from behind the arc.

“We held them to 49 points,” said Coleman. “From a defensive standpoint, this is what we want – to hold teams to 60 points or less. We just didn’t execute on the offensive side tonight.”

Grant was 0-5 from deep, but hit six of her ten field goal attempts from inside the arc, showing an array of pull-ups and taking contact. Jones made all of her work inside and at the line, where she went 4-5. Of her 13 rebounds, five were offensive. The 13 rebounds were the most for a Clemson player since Shaniqua Pauldo had 15 against UNC Greensboro to open the 2010-11 season.

Last season, the highest individual rebounding total was 12 by Quinyotta Pettaway. On Sunday afternoon, Pettaway pulled down nine rebounds, but hit just two of her eight attempts from the floor for four points.

Grant was able to fill other statistical categories as well, blocking three shots and grabbing six rebounds, assisting on two baskets, and nabbing a pair of steals.

Clemson had 17 turnovers in the game, while only forcing 11 from the Blue Hose. While Clemson won second chance points, 12-2, and points in the paint, 22-18, PC scored 15 points off Clemson turnovers.

When the Blue Hose took a nine-point lead at 40-31, Jones answered with a bucket. Karlee Taylor then scored two more, before Dixon and Jones connected on three-point plays to pull Clemson within three at 42-39 with 3:46 to play. A Jones free throw and a Pettaway hoops cut the margin to two points. Taylor hit two free throws with 1:05 to play to give the Blue Hose a 46-42 lead.

Grant then came down and started to her left, pulling up and hitting a shot off the glass from the block to pull within two with 52.2 seconds to play. After the Blue Hose missed two free throws, Grant hit a nearly identical shot with 12.2 seconds remaining, leading to PC’s final possession.

The Lady Tigers must rebound quickly, as they’ll play host to South Florida on Tuesday at 7:00 pm in Littlejohn Coliseum.