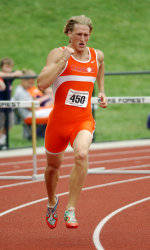 Porter performed well on Friday, finishing first in the intermediate hurdles with a time of 51.95. His personal best effort was also a regional-qualifying performance. He also qualified for regionals as a freshman in the 400m hurdles. Travis Swaggard did not quite meet the regional standard, but was runner-up with a season-best time of 52.87.

Also on Friday, red-shirt freshman Matt Feiling placed second in the hammer throw. The native of Midlothian, VA had a personal best mark of 157’5″. His previous best this season had been 154’9″ at the Clemson Invitational on April 7.

On Saturday, the Tigers had a few student-athletes entered in various events. Sean Reilly was fourth with a time of 4:02.62.

Jason Bell won the triple jump, but did not improve on his season-best. He had a mark of 49’5.5″ into a -1.3 wind. The senior from Warner Robins, GA is the school’s all-time leader in the outdoor event. In the discus, Feiling placed fourth with a mark of 131’10”.