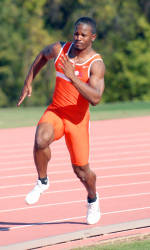 Greensboro, NC – Bob Pollock of the Clemson men’s track & field program was named outdoor ACC Coach-of-the-Year for the ninth time Thursday, while junior Travis Padgett was honored as Most Valuable Track Performer, giving him a clean sweep of MVP honors both indoor and outdoor in 2008. Both honors were determined by a vote of the league’s 12 head coaches.

Pollock guided the Tigers to a runner-up team finish in which Clemson put forth a strong challenge against three-time defending league champion Florida State. It marks the first time since 2004 that Pollock earned the conference’s outdoor Coach-of-the-Year accolade. Clemson has finished first or second at the ACC Outdoor Championships in 17 of Pollock’s 20 years in charge of the program.

He now owns a total of 18 Coach-of-the-Year honors, when including indoor and outdoor seasons. Pollock coached a pair of individual champions at last week’s meet, as well as the 4x100m relay team. Travis Padgett won the 100m dash, while Mitch Greeley took home the pole vault crown. Eight of his student-athletes earned All-ACC finishes in individual events at this year’s meet as well.

Padgett earned the MVP honor indoors in 2008 after capturing the league championship in the 60m and placing fourth in the 200m dash. Last week, the Shelby, NC product won his third straight title in the 100m dash. In doing so, he became the first student-athlete in ACC history to win the 100m crown three times. He also ran anchor leg for the championship 4x100m relay team and was runner-up in the 200m dash. It was Clemson’s first victory at the league outdoor meet in the 400m relay since the 2004 season.

Padgett easily stormed past the field in the 100m final after posting a time of 10.17 into a strong headwind. His time established an ACC outdoor meet record, which he previously held after posting a 10.21 in the 2007 prelims. Padgett posted regional-qualifying times in all three events last week, including the second straight year he has done so in the 200m.