CLEMSON, S.C. —  No. 3 Clemson handled Pitt (5-5, 4-5 ACC) by a score of 52-17 on Senior Day and Military Appreciation Day behind a 403-yard passing performance by Trevor Lawrence in his return from a two-game absence. The Tiger defense played stout, forcing five turnovers including four interceptions, two of which were from junior cornerback Mario Goodrich.

The Tigers (8-1, 7-1 ACC) came out of the gates firing, scoring a school-record 31 first-quarter points. The dominant first frame was highlighted by three interceptions on Pitt’s first nine pass attempts, and two touchdown passes from Lawrence. With the win, Lawrence moved to 32-1 as a starter and tied the school-record for wins as a starting quarterback set by Rodney Williams, Tajh Boyd and Deshaun Watson at 32 wins apiece

E.J. Williams, wearing number 39 to honor his late father who died at 39 years of age after serving for 18 years in the U.S. Army, opened the scoring with a five-yard reception good for his first career touchdown. Cornell Powell added a touchdown on a 43-yard-flea flicker. He finished with 176 yards receiving on six receptions and became the first Tiger with at least 150 receiving yards in back-to-back games since Sammy Watkins in 2013.

The second quarter saw Chez Mellusi add his third touchdown of the season on a two-yard run, and the Tigers took a 38-10 lead into halftime, but a Lawrence fumble on the opening play of the second half led to a Panthers touchdown that cut the deficit to 21 points.

After the two teams traded several punts, Travis Etienne cashed in on a 10-play, 89-yard drive with a three-yard touchdown run, his second score of the game. His first-quarter scamper added to his FBS-record 44th game with a touchdown. Etienne ran for 58 total yards on 11 carries for the game.

Clemson opened the fourth quarter scoring when freshman quarterback D.J. Uiagalelei led the Tigers on a 41-yard drive, culminating in a nine-yard pass to Mellusi for his first career receiving touchdown which gave the Tigers their 52-17 advantage.

The rest of the fourth quarter marched on with no scoring as the Tigers cruised to the victory in the penultimate game of their regular season.

The Tigers wrap up their regular season schedule on Saturday, Dec. 5, when they travel to Blacksburg, Va. to take on Virginia Tech. Kickoff time and the television information for that game are still to be announced.

Click to see information on all the Military Appreciation Day presentations: 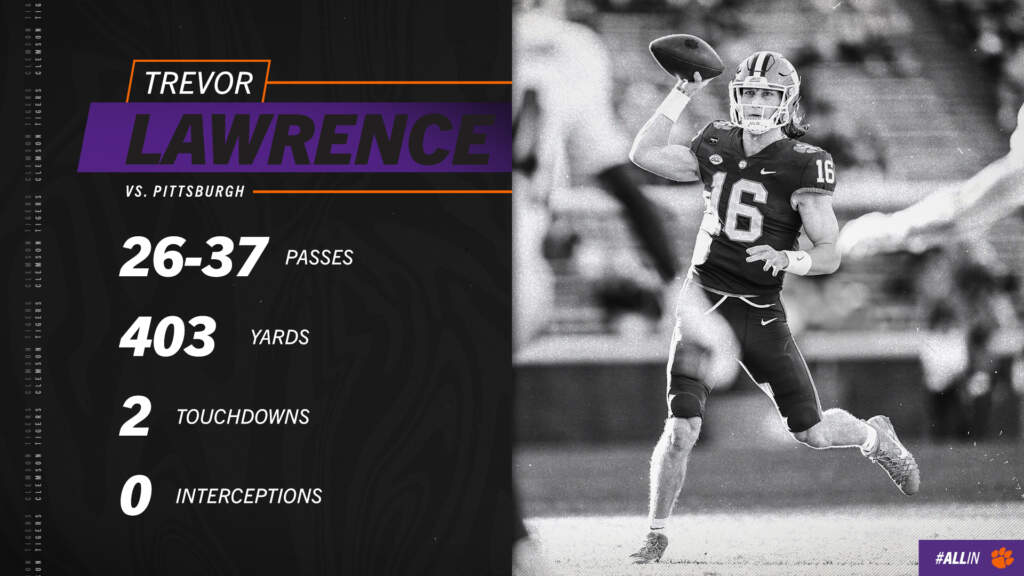