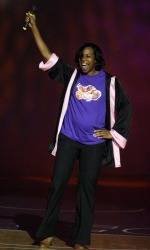 The Clemson basketball teams tipped off the 2011-12 season officially last Friday night at the fourth annual Rock the `John, the Tigers’ celebration for the opening of a new season. An estimated crowd of 5,000 fans were on hand to meet the men’s and women’s teams.

Players were introduced to the crowd by class, followed by comments from head coaches Itoro Coleman and Brad Brownell. The players participated in a handful of fun events, including teammate trivia, a two-ball contest, and a dunk contest. The team of Devin Coleman and Shaniqua Pauldo captured the two-ball title.

Senior forward Bryan Narcisse staved off a strong challenge from freshmen K.J. McDaniels and Bernard Sullivan to retain the “championship belt” in the dunk contest. The men also conducted a brief scrimmage, before both teams headed to the concourse level to sign autographs and take pictures with fans for nearly an hour after the conclusion of the event.

Both teams open the 2011-12 regular season as part of a double-header on Friday, Nov. 11. The women will face Davidson at 5:30 PM, followed by the men’s game against Gardner-Webb at 8:00. Tickets are available by calling 1-800-CLEMSON or by following the ticket link on the official athletic home page, ClemsonTigers.com.