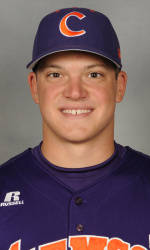 Pohl was selected as the first-team designated hitter for District IV. The Cooperstown, NY native and co-captain is hitting .306 with nine doubles, seven homers, 44 RBIs, 25 runs, and one steal in 45 games (45 starts).

In the classroom, Pohl entered the spring semester with a 3.67 career GPA in management. He was named to the ACC Academic Honor Roll each of his first three seasons. Pohl, who is slated to graduate on May 11, has also been involved in several community service projects during his time at Clemson.