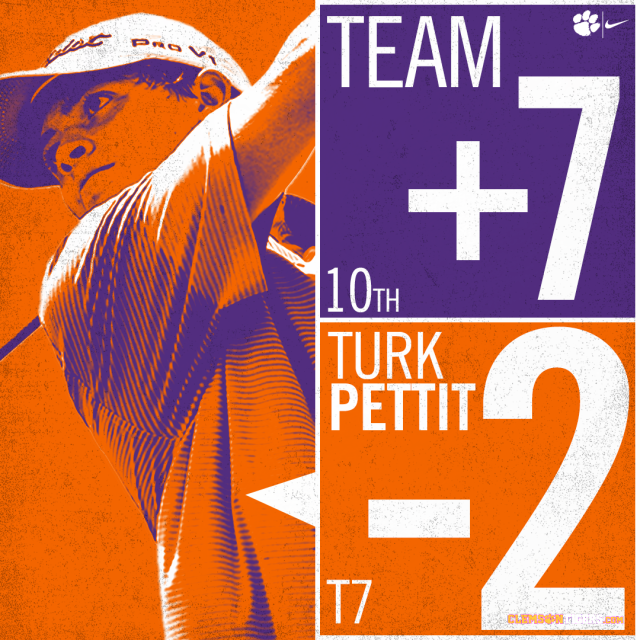 Pettit Leads Clemson with 70 in First Round of Carpet Classic

Clemson, S.C.—Freshman Turk Pettit shot a two-under-par 70 in his first career round to lead the Clemson golf team to a 295 score in the first round of the Carpet Classic in Dalton, Georgia. The Tigers are in 10th place in the 15-team field after the opening 18 holes, but the 295 score is just three shots out of fifth place in the field that includes nine ACC and SEC schools.

Florida has the first round lead after a team round of 281, while Tennessee is second at six-under-par 282.   Clemson is playing the tournament without No. 1 player Doc Redman, who is in Los Angeles this weekend competing for the United States team in the Walker Cup. Redman is the reigning United States Amateur Champion.

Pettit, a football and golf combination high school athlete from Auburn, Ala., had four birdies and just two bogeys to lead the Tigers on Friday. He stands in seventh place after the first round of the three-round event that concludes on Sunday. He had three birdies on the back nine and shot 34 to finish strong.

Junior Bryson Nimmer, a two-time All-ACC player, had a one over par 73 on Friday. The native of Bluffton, S.C. had a 35 on the opening nine when he was two-under-par after seven holes. He shot a 38 on the second nine and stands in 22nd place after the first round.

Clemson’s other three players shot four-over-par scores of 76. William Nottingham finished strong with a one-under-par 35 on the back nine after an opening nine 41. He birdied two of the last four holes.   Coleman Self was even par through 12 holes before making bogey on four of his last six holes. Freshman Kyle Cottam was even par through 16 holes before making a triple bogey on the 17th hole that ruined his round.

Clemson beings play on Saturday at 9:17 a.m. on the back nine and will play with California and Kennesaw State.