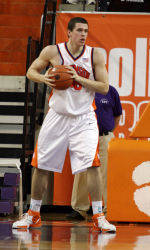 Petrukonis to Compete at Under 20 European Championships in July

Rising sophomore basketball player Karolis Petrukonis will compete for his home country Lithuania at the Under 20 European Championships from July 6-15. The competition will be held in two different locations, Nova Gorica, Slovenia and Gorizia, Italy.

Lithuania will play in Division A of the event. Their first game will be July 6 against Turkey in Group B. Petrukonis and his teammates will then play Russia and Greece the following two days to complete the preliminary round robin action. The qualifying round games will be determined by countries’ records in the preliminary round.

Petrukonis already has international experience under his belt. Last summer, the 6-11 center played with Lithuania in the 18 and under European Championships. In 2005, he was an all-tournament selection at the 19 and under Nike World Juniors in France.

Petrukonis, who played high school basketball in the U.S. at the Norfolk Collegiate School (VA), played in 13 games as a true freshman in 2006-07. In his first-ever game as a Tiger, he scored four points and collected two steals and a blocked shot in just eight minutes versus Arkansas State. He is one of 11 returning lettermen for Oliver Purnell’s squad in 2007-08.