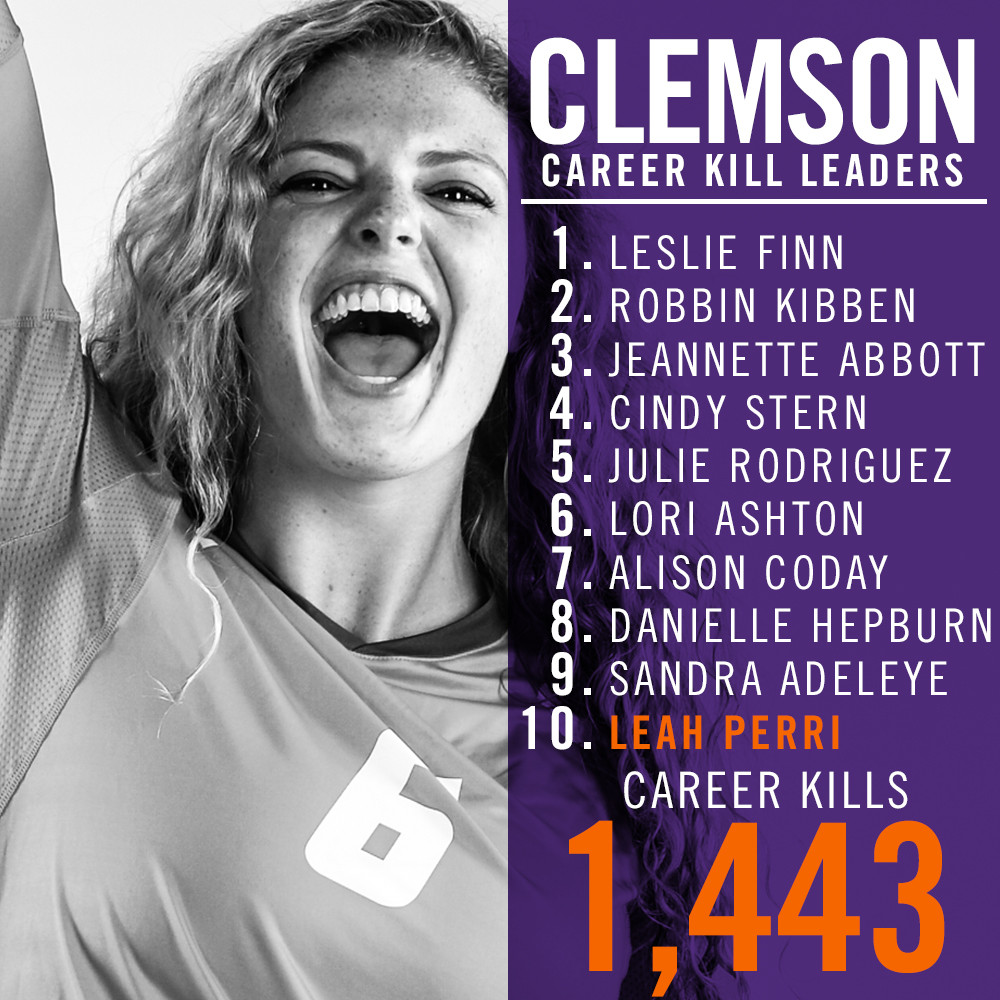 “I’m real proud of how we competed against a very talented NC State team that can stress you defensively,” said head coach Hugh Hernesman. “While it can be frustrating not having a healthy roster, I think we focused on the right thing and competed real hard. We were in a good position to win a couple of those sets, but couldn’t quite execute the way we wanted. I’ll give this group credit all day with the way their effort and focus though. That pays off down the line.”

Perri finished with a match-high 14.5 points with 13 kills, a .242 hitting percentage, nine digs and three blocks to her credit. The Richland, Michigan native surpasses Lia Proctor with 1,443 career kills, placing her 10th all-time in program history. The match marks her 22nd match with 10 kills or more in 2016 and she was just a dig shy of her 10th double-double of the season.

“What can you say about Leah that people don’t already see for themselves. She’s been such a major part of the program in her time here at Clemson. She’ll do anything on the floor for the team and find a way to impact any match, regardless of her role. The last two matches, she’s been forced into the middle with Jaden being out sick and still was able to make great contributions as an attacker and in the back row as well. Just an overall great player and one that has really grown her game over the course of her career. Everyone sees the big kills, but she’s quietly developed into a very good six-rotation player and our steadiest passer. We’re all very proud of her.”

Taylor Daniel set the offense to a career-best 35 assists against the Wolfpack, complemented by her three blocks, one service ace and four digs. Megan McGinley and Keely Hayes made the most of Daniel’s sets, hitting .308 and .333 respectively. They each finished with six kills while Hayes earned nine digs and McGinley denied opposing hitters seven times. Tori Woogk and Kailey Harvell each finished with impressive offensive lines as well they combined for 15 kills on the day. Harvell hit .273 with seven kills while Woogk finished with eight kills and a .261 hitting percentage.

Emily Curtis earned her 15th match of the season with 10+ digs as the freshman dug 14 of NC State’s attempts. Sydney Moseley added seven digs and an ace with Ally Gamble adding an ace as well.

The Tigers come back to Clemson for their final home stand of the season next weekend, hosting Notre Dame and Louisville. Clemson will host the Fighting Irish on November 18 at 7:00 p.m., and will conclude the weekend with a 1:00 p.m., matchup with the Cardinals on November 20.