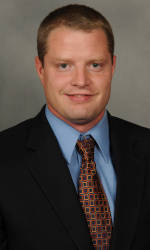 CLEMSON, SC – Clemson Assistant Swimming Coach Derek Perkins has accepted an offer to join the staff at the University of Kentucky, Clemson Head Coach Christopher Ip announced. Perkins is a 2003 graduate of Kentucky and a four-time letter-winner for the Wildcats.

“I am excited for Derek and his new coaching position at the University of Kentucky,” Ip said. “Derek was a prime mover in our program; our swimmers’ success reflected his passion and work ethic.

“I am confident that the team will continue this work ethic and drive in their final year of the program. We wish the best for Derek and his family.”

Perkins returns to his alma mater on a good note, having helped Clemson to one of the best seasons in school history. Recently, he was named CollegeSwimming.com’s Rising Assistant Coach of the Year for the 2011 season.

“This is a very bittersweet decision for me and my family,” Perkins said. “It has been a very special two years for me and I want to thank Chris Ip and the rest of the team for giving me the opportunity to be a part of a program that has been a cornerstone of Clemson athletics for more than ninety years. While I am sad to leave, I am also excited about my opportunity at Kentucky.”

Perkins just completed his second season at Clemson, working mostly with the team’s sprinters. He was involved with several members of the Tigers’ nationally-ranked men’s swimming team that sent four members to the NCAA Championships and won multiple conference titles.