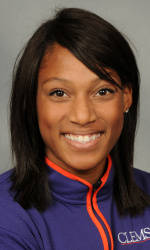 CLEMSON, SC – Two-time NCAA champion Patricia Mamona, a triple jumper at Clemson from 2007-11, broke her own national record in the event in a winning effort Sunday at the Portuguese Championships. She hit a personal best leap of 14.42 meters, or 47’3.75″, to surpass the `A’ qualifying standard for the IAAF World Championships later this month in Daegu, Korea. Mamona’s effort also puts her in line for a bid to the 2012 Olympic Games in London, England because the performance came within the qualifying window.

Mamona captured back-to-back NCAA titles in the triple jump at the outdoor national meet, winning first in Eugene in 2010 and in Des Moines in 2011. She holds Clemson records in both the indoor and outdoor triple jump, with a collegiate best of 46’2.75″ on May 7 this past season. Mamona, a 13-time all-conference performer, earned an undergraduate health science degree in May from Clemson. She was an honorary postgraduate scholarship winner in the Atlantic Coast Conference, because she intends first pursue a professional track & field career prior to working on an advanced degree.

“We’re extremely proud of Patricia for qualifying for the World Championships,” said Lawrence Johnson, Clemson’s Director of Track & Field. “This is just the beginning for her, she has the potential to jump much further as she progresses in her career.”