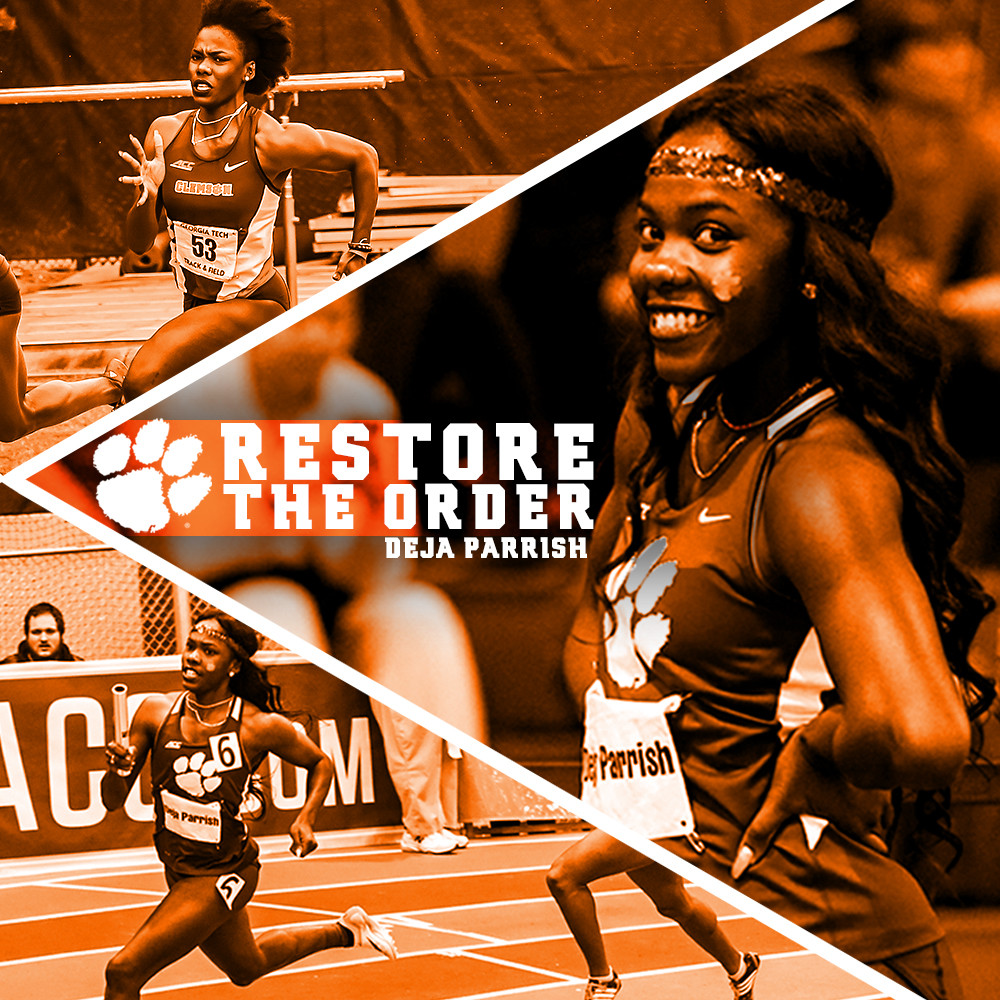 Deja Parrish’s path to Clemson was a little different than most. As a highly touted track recruit out of Ft. Lauderdale, Fla., she narrowed her college choice down to two schools 2,000 miles apart — Clemson and UCLA. She eventually chose the Tigers over the Bruins for three main reasons, two of them being the coaching staff and academics.

“I loved the coaches, especially Coach [Althea] Thomas and Coach [Marvin] Gibson,” Parrish explained. “I chose Clemson because of the coaches and that they were willing to work with me on majoring in the medical field.”

The third reason was a little out of the ordinary. Childhood friend Jeffrey Green, another high-profile track prospect, committed to Clemson before Parrish and encouraged her to join him.

“We knew we both had a great opportunity to come to Clemson, so I committed right after he did.”

The two had grown up in the same neighborhood and wanted to run collegiate track together at the same school. With each other to lean on as freshmen, both Green and Parrish made an impact in their first seasons as Tigers.

She followed that up by winning another gold medal in the 4×100 relay at the ACC Outdoor Championships. For her efforts, Parrish was named the 2015 ACC Outdoor Freshman of the Year.

“Freshman year, I really just tried to do my best,” she said. “At ACCs, I wasn’t expected to score in any of my events and I just wanted to produce and get points for my team. That was my biggest goal. I just wanted to contribute and be able to say I earned my ACC Championship ring.”

At the 2016 ACC Indoor Championships in Boston this February, the defending champion Clemson tasted a rare defeat, finishing second to Miami. Individually, Parrish improved on her seventh-place finish in the 200 meters by finishing third.

“I worked harder than I did freshman year and I realized I’m just as good as anyone in our conference and I can run just as fast,” Parrish emphasized following the indoor competition.

Despite her individual improvement, Parrish expressed disappointment when talking about the Tigers’ recent second-place finish at ACC Indoors. The Clemson women’s track and field program has won five ACC Indoor and five ACC Outdoor titles in the past six years, creating a standard for current and future teams to uphold.

However, Parrish claims she does not feel pressure to win, but rather, simply sees the program’s past success as motivation for her and her teammates to continue the winning tradition.

“We don’t feel the pressure because we know walking in to ACCs that teams look at us and think, ‘Oh no, Clemson is here,’” she said. “We hold ourselves to a standard and try to maintain it. There’s no pressure because we work hard all year for this, and we just have to show up when it counts.”

This weekend, Clemson will try to do just that as both the women’s and men’s track & field teams travel to Tallahassee, Fla., for the 2016 ACC Outdoor Championships. The Clemson women will need Parrish to continue to perform at a high level in order to restore order and bring another ACC Championship back to campus.

Luckily for Clemson, Deja Parrish is at her best when the stakes are the highest.

“I love the big stage. I think of my teammates when I’m running and I just want to win for the team. Our focus is to help each other out and put ourselves in the best position to achieve our common goal of winning an ACC Championship.”