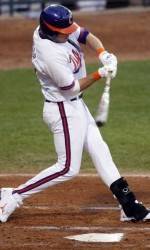 Parker Drafted in First Round by Colorado Rockies

CLEMSON, SC – Clemson two-sport athlete Kyle Parker was taken by the Colorado Rockies in the first round of the Major League Baseball draft on Monday night. Parker was the 26th overall selection of the draft. He is the 10th first-round draft selection since Jack Leggett came to Clemson in 1994.

Parker leads the Clemson baseball team in home runs, runs scored, slugging percentage and on-base percentage this year. He hit his 20th home run of the season on Monday night in the first inning of the NCAA Regional against Auburn. The two teams are playing for the right to advance to the NCAA Super Regional.

This past football season Parker threw 20 touchdown passes as Clemson’s starting quarterback, helping the Tigers to a 9-5 record, the Atlantic Division championship of the Atlantic Coast Conference and a #24 final ranking in the Associated Press poll. Parker tied for first in the nation in wins by a starting freshman quarterback with nine.

The two-time first-team All-ACC player was hitting .358 entering tonight’s game with 58 RBIs. His three-run homer in the first inning gave him 61 RBIs for the year. For his three-year baseball career, he has 46 home runs, eighth best in Clemson history and he is just 13 short of the Clemson career record. He is also just the eighth player in Clemson history to hit at least 20 home runs in a season.

Parker is the first Clemson player taken in the first round since Daniel Moskos was the fourth pick of the 2007 draft by the Pittsburgh Pirates.

Parker is the fourth Clemson player drafted by Colorado in the last two years. Last year the Rockies drafted Tigers Ben Paulsen in the third round, Clinton McKinney in the 48th round.

“I am happy for Kyle,” said Clemson Head Football Coach Dabo Swinney. “He has worked hard all season. He has had a tremendous baseball season after he had a terrific year at quarterback for us in the fall. Being the first 20-20 (TD passes and home runs) athlete in college sports history is really quite an accomplishment.

“It is not surprising that he was drafted by Colorado because they have had great success with Todd Helton, who also played quarterback at Tennessee.

“We will sit down with Kyle and his family some time after the baseball season ends. We won’t do anything to disrupt our baseball team in post season play. At least now we know where he stands.

“Kyle is a fine young man and we will respect whatever decision he makes. I feel he has a bright future in football as well and certainly hope he will be under center for us this fall.”