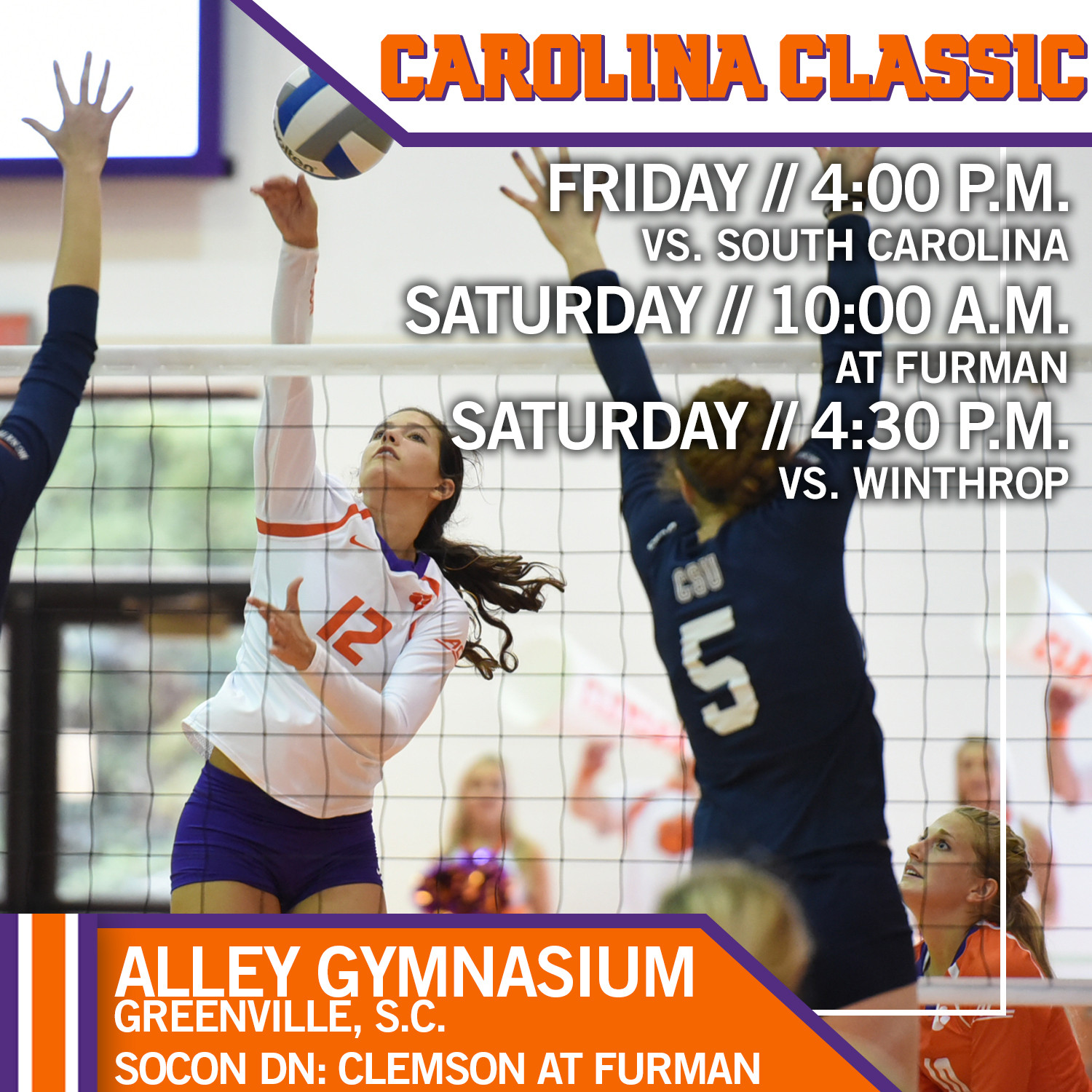 CLEMSON, S.C. – On Friday, Furman welcomes South Carolina, Winthrop and Clemson to Greenville, S.C., for the Carolina Classic. Furman and South Carolina present difficult matches as they both finished higher than the Tigers last year in RPI.

“We have another good weekend of competition for us and a chance to see how we’ve improved,” said Coach Hernesman. “Just like last weekend, we’re playing two teams that finished higher than us last year in final RPI- and Winthrop isn’t that far behind.  The difference is, of course, we graduated five starters.”

In its first test of the tournament the Palmetto Series continues, as Clemson will take on South Carolina at 4:00 p.m. The Tigers lead the series thus far 1-0 after women’s soccer defeated the Gamecocks last week.

On Saturday, the Tigers will begin the day with a 10:00 a.m., matchup with Furman. The match will be broadcast live on the SoCon Digital Network. Clemson will finish the Clemson Classic with its match against Winthrop at 4:30 p.m.

“This is a chance for us to learn more about ourselves in some very highly competitive matches,” Hernesman said. “So, while we know we’re young and have some inexperience, the expectation doesn’t change.  We’ll continue to grow in our systems and after seeing how we played most of the weekend last weekend, I am confident that we’ll compete extremely hard.”

“We’re looking forward to see the progress in both our defensive and offensive systems, but also within our individual consistency and skillsets.”

Last week it was three freshmen in particular that stood out in their significant playing time. Kailey Harvell recorded 14 kills and nine digs in her debut and followed up the next day with a team-leading 16-kill, eight-dig effort in the win against Charleston Southern. She is second to Leah Perri in kills with 31.

Middles, Megan McGinley and Sofia Hruby improved throughout the weekend as Hruby recorded her first career double-digit scoring effort with 10 kills against Charleston Southern while McGinley dropped eight on the Buccaneers. Against Appalachian State the two combined for 10 kills and four blocks. Each of them recorded four blocks against Charleston Southern.

Notes (in 140 characters or less)• Clemson vs. South Carolina presents an interesting matchup for reasons past the rivalry. Our very own, Nicole Miller will coach against her former teammate, Shonda Cole and Kennedy Wilson-Talmadge will compete against her sister, Jordan Wilson.• Clemson’s eight freshmen is the highest total in the Atlantic Coast Conference.• Hugh Hernesman is the ninth head coach in Clemson volleyball history.• Keelie Arneson is 226 digs away from cracking the NCAA’s all-time list of digs leaders.• If Keelie Arneson duplicates her ‘13 performance (712 digs) she will have the second most digs ever recorded in D-I women’s volleyball.• Keelie Arneson currently leads the ACC with a 5.25 digs per set average.• Kate Federico ranks fifth in the conference averaging 9.80 assists per set.• Kate Federico’s 1,171 assists last year are the second most ever recorded by a Clemson freshman.• Kate Federico’s 1,171 assists in 2014 was the second highest total in the ACC and the most recorded by a freshman.• Kate Federico’s 1,171 assists are the most recorded by a Tiger in the last five years.• Kate Federico’s 35 service aces are the most recorded by a Tiger in the last eight years.• Leah Perri headlines the Clemson attack with 666 career kills, she ranks eighth in the conference with a 3.70 kills per set average.