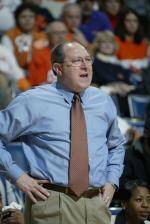 This is the fourth-straight year the women’s tournament will be held at the Greensboro Coliseum. This year’s tournament is set to tip-off on Friday, March 7 and end with the championship game on Monday, March 10. The tournament schedule is as follows:

For the fourth straight year, the tournament will feature expanded television coverage with five of the eight games to be broadcast. The first two quarterfinal games will be aired on the league’s regional sports networks (Comcast SportsNet, FOX Sports Net South and Sunshine Network). Sunday’s semifinals and Monday’s championship game will be televised nationally by FOX Sports Net. This is the second year that the tournament will have three nationally televised match-ups, up two from a year ago.