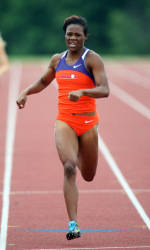 DES MOINES, IA – Clemson got on the board in the team scoring at the NCAA Outdoor Track & Field Championships with a pair of top-eight finishes at Drake Stadium on Friday. Marlena Wesh was sixth in the 400-meter dash, while Alyssa Kulik took home seventh place in the 3000-meter steeplechase. The two combined to score five points on day three for the Tigers.

Wesh followed up a fifth-place indoor national finish with a sixth-place effort at the national meet. She ran out of lane eight and set a fast early pace, and then hung on for a time of 52.13. It was Clemson’s first-ever scoring effort at the NCAA Outdoor Championships in the women’s 400 dash.

“I went out as hard as I could,” she said. “Off the curve, I didn’t see anybody and I tried to move my hands. I didn’t do as well as I wanted to do, but the wind was very strong. I made it to the final, and a lot of people can’t say that.”

Kulik earned a podium finish for a second straight year in the steeple. The Clemson graduate out of Simpsonville, SC got out front early, but shuffled to the middle of the pack a third of the way through the race. She posted a time of 10:07.54 in the final.

“I could never get in a good position, and by the time I did, it was too late,” Kulik said. “It was a bad race for me. I would’ve been upset if I hadn’t made it to the podium, but I’m definitely not satisfied with that race. I had a great season, and I still have the (Olympic) Trials coming up. I won’t wallow in self-pity.”