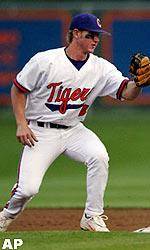 The San Diego Padres promoted Khalil Greene to its Major League roster Tuesday. Greene played shortstop for Clemson from 1999-02 and was the Padres’ first-round pick in the 2002 MLB draft. San Diego (56-82) has 24 games remaining in its regular-season schedule.

Greene began the 2003 season with the Padres’ AA minor league team, the Mobile Baybears. While at Mobile, Greene hit .275 with 17 doubles over 59 games. He was promoted to AAA Portland on June 10 and has remained there ever since.

Greene played in 76 games with the Portland Beavers, hitting .288 with 10 home runs and 47 runs batted in over that span. He also committed only 11 errors over that time from his shortstop position.

Greene was named National Player-of-the-Year in 2002 by every service after hitting .470 with 27 homers and 91 RBIs. He finished his career first in ACC history and second in NCAA history with 403 hits. He also hit 95 doubles over his career, most in NCAA history.

Over his career, he appeared in 272 games and started all but one. He had 1,069 at-bats in his four years with the Tigers, most in ACC history. Greene also finished with 276 RBIs, also an ACC career record.

He set five single-season records at Clemson his senior year, including doubles (33), home runs (27), slugging percentage (.871), extra base hits (61), and RBIs (91). Greene capped his brilliant career by being selected to the ACC’s 50-year anniversary team.