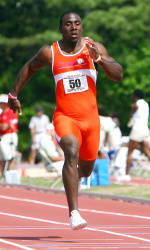 Padgett, Spiller Lead the Way on Day One at NCAA East Regional

Tallahassee, FL – C.J. Spiller qualified for the finals in both the 100m and 200m dashes Friday to highlight Clemson’s track & field efforts on the first day at the NCAA East Region Championships. The Tigers do not have any points entering the final day of competition, but Clemson only competed in one scored final Friday. Clemson will compete in seven scored events Saturday.

All three Tiger entries in the 100m dash qualified for Saturday’s final, which will be at 5:10 PM. C.J. Spiller turned in personal best times in the event Friday at 10.21 and 10.29, respectively. It was only Ford’s second individual competition this season, as he has recovered from an ankle injury stemming from the 2007 football season. All three impressive times were posted despite a -1.1 headwind.

Clemson appeared to have qualified for the 4x100m relay finals for the third straight year at the beginning of the session, but the Tigers had a late exchange from the second to third leg. Thus, Clemson’s group of Spiller, Ford, Trenton Guy, and Padgett was disqualified. The Tigers own a season-best 39.23, which ranks among the nation’s best. Unfortunately, despite Clemson’s credentials, the disqualification may have cost the 4×1 team a shot at an at-large bid to nationals.

Padgett and Spiller advanced to the finals in the 200m dash as well, which is slated for 6:05 Saturday evening. Padgett won his section with a time of 20.92 seconds, while Spiller was runner-up to hometown favorite and defending NCAA champion Walter Dix in the first heat with a personal best time of 20.96. The Lake Butler, FL product was tied for the sixth-fastest preliminary time, while Padgett was fifth overall in the qualifying heats. Guy (21.18), Corey Brown (21.53), and Cowin Mills (21.55) also ran in the 200m prelims.

Mills was the team’s top performer in the quarter mile, crossing the finish line with a time of 47.47. Travis Swaggard competed in the prelims for the 400m hurdles, finishing 21st overall out of 35 entries with a time of 52.77 seconds.

Matt Clark competed in the 1500m and was 17th out of 34 runners, but did not advance to Saturday’s final. However, the senior out of Hyannis, MA should receive a bid to the NCAA Outdoor Championships in the 10,000m run. He had a strong provisional qualifying time of 28:49.77 at the Stanford Invitational earlier this season.

George Fields was the Tigers’ lone competitor in the field events Friday. The junior out of Columbia, SC was unable to follow his fourth-place finish from a year ago in the long jump. He finished 12th in a large field, posting a top jump of 23’9″ on his second attempt. Fields’ best mark of the season was 24’9.75″ at the ACC Championships, a mark that ranked 49th nationally heading into regional weekend.

The Tigers return to action Saturday for the final day of regionals. The action gets started at 10:00 AM with Zach Berg competing in the hammer throw.