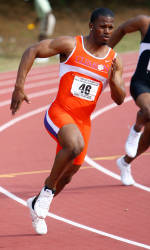 Des Moines, IA – Travis Padgett competed in the 200m dash Thursday at the NCAA Outdoor Track & Field Championships, finishing 10th in the event after the semifinals. Matt Clark is also scheduled to compete for Clemson on Thursday, but it will be the last event late in the evening.

Padgett ran a 20.86 to win his heat, advancing to the semifinal round for the first time in his career in the 200m dash. However, he did not make the finals after coming up just short in the second semifinal. He had a time of 20.77, just two spots and five hundredths of a second short of qualifying for Saturday’s final.

Padgett will be joined by teammate Jacoby Ford in the finals of the 100m dash on Friday at 8:45 PM (CT). The event will be televised live by CBS College Sports Network (formerly CSTV).