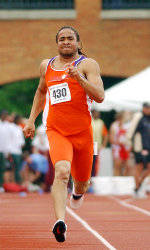 Blacksburg, VA – The Clemson men’s track & field team wrapped up competition on the first day of the Virginia Tech Invitational on Friday. The sprint duo of Travis Padgett and Corey Brown highlighted the Tigers’ efforts, as both qualified for Saturday’s final in the 55m dash. Sam Bryfczynski won the 5000m run to also highlight Friday action for the team.

Padgett posted the top time overall in the preliminaries at 6.33 seconds, while Brown was seventh with a time of 6.42. In the semi-finals Friday night, Padgett had the third-best time at 6.31 while Brown improved to fourth at 6.33 seconds. The 55m final will be held Saturday at 12:50 PM.

Jason Bell placed third in the triple jump. The senior from Warner Robins, GA posted a season-best effort of 49’11.75″ to earn his third-place spot. In the weight throw, red-shirt freshman Zach Berg finished 13th out of 27 competitors with a mark of 52’7.5″.