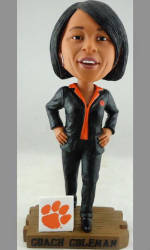 CLEMSON, SC – The Clemson Lady Tigers will play host to No. 5 (AP and Coaches Poll) Duke on Friday at 8:30 pm in Littlejohn Coliseum in the Pack the House game. Admission is just $1.00 for the general public and free to students. The first 1,000 people will receive a free Itoro Coleman bobblehead doll. The game will be televised on the regional sports network, and is available on ESPN3. The game will also be broadcast on the Clemson Tiger Sports Radio Network. Duke leads the all-time series with Clemson, 33-32, and has won 14 straight, but Clemson holds a 16-12 mark in Littlejohn. Clemson enters the game having dropped two straight contests, including one on the road to Wake Forest on Sunday. The Lady Tigers received career and season-best efforts from Quinyotta Pettaway (24 points, 9 rebounds, 11-20 FG) and Lindsey Mason (17 points, 4 blocks) in the contest. Mason moved into second in Clemson history in career blocked shots when she rejected number-130 in the first half. She finished with 133 total in the game, leaving her alone for second in school history. She currently ranks 3rd in the ACC at 2.5 per game, while Clemson ranked third in the league and 11th nationally as a team at 6.1 per contest. Freshman Kelly Gramlich has scored in double-figures in four straight games, and is coming off her first career double-double (13 points, 10 rebounds) in the most recent game. She is averaging 8.8 points per game this season, fourth behind fellow freshman Nikki Dixon, who leads the team at 11.9 points per game. Her scoring average is second in the ACC among league freshmen behind Duke’s Elizabeth Williams, who also leads the conference in shot-blocking. Clemson will have a quick turnaround after this game, taking on Georgia Tech on Sunday at 4:00 pm in Littlejohn.