Travis Etienne has been electrifying on the gridiron in over two seasons. Tiger fans can barely contain their excitement every time he touches the football, knowing that in the blink of an eye, Etienne could be standing in the endzone. The junior running back from Jennings, La. has made himself at home in Clemson, even though he is far from home.

Etienne’s journey to Tigertown began as a child first starting to play football in his backyard with his grandmother.

“I was really young. My grandmother used to take me outside and throw me footballs. I started there, catching balls from her.” 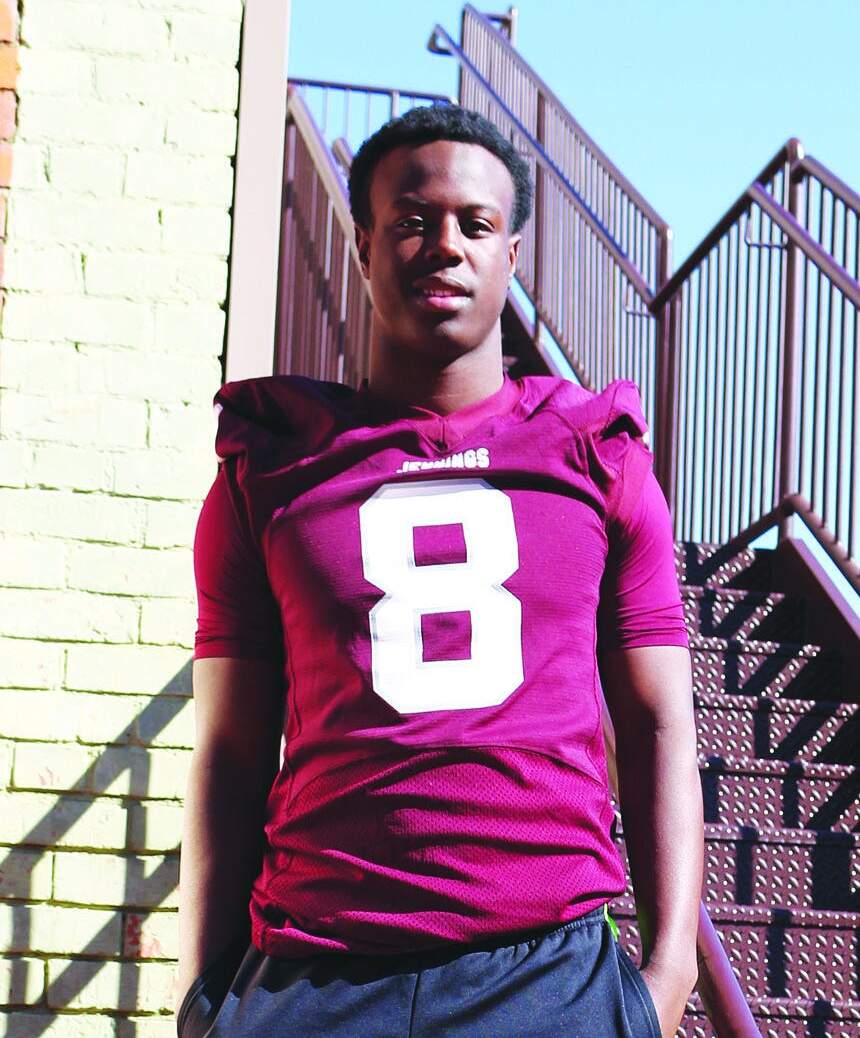 Etienne’s recruiting process was an interesting one. Rated as one of the top running back recruits in his class, Etienne had plenty of potential suitors, and he actually originally committed to Texas A&M. Clemson entered his recruiting process in the latter stages, but that did not impact the process for Etienne.

“Clemson entered late, but it didn’t have an effect for me. I was committed to Texas A&M for a year, and then I decommitted, so it was wide open. Clemson was one of the top schools, and they offered me. I came and visited, and Clemson sold itself, so it played out perfectly.”

For Etienne, what really sold Clemson to him was the culture that Head Coach Dabo Swinney has built within the football program.

“When I got here, it was the genuineness of the coaches. It was the spirit they have around here, the culture that Coach Swinney is building, hands-on. It was also the family atmosphere, the way they treated me and my family and the way I see them treating other players being recruited just like me…seeing them make it personal.” 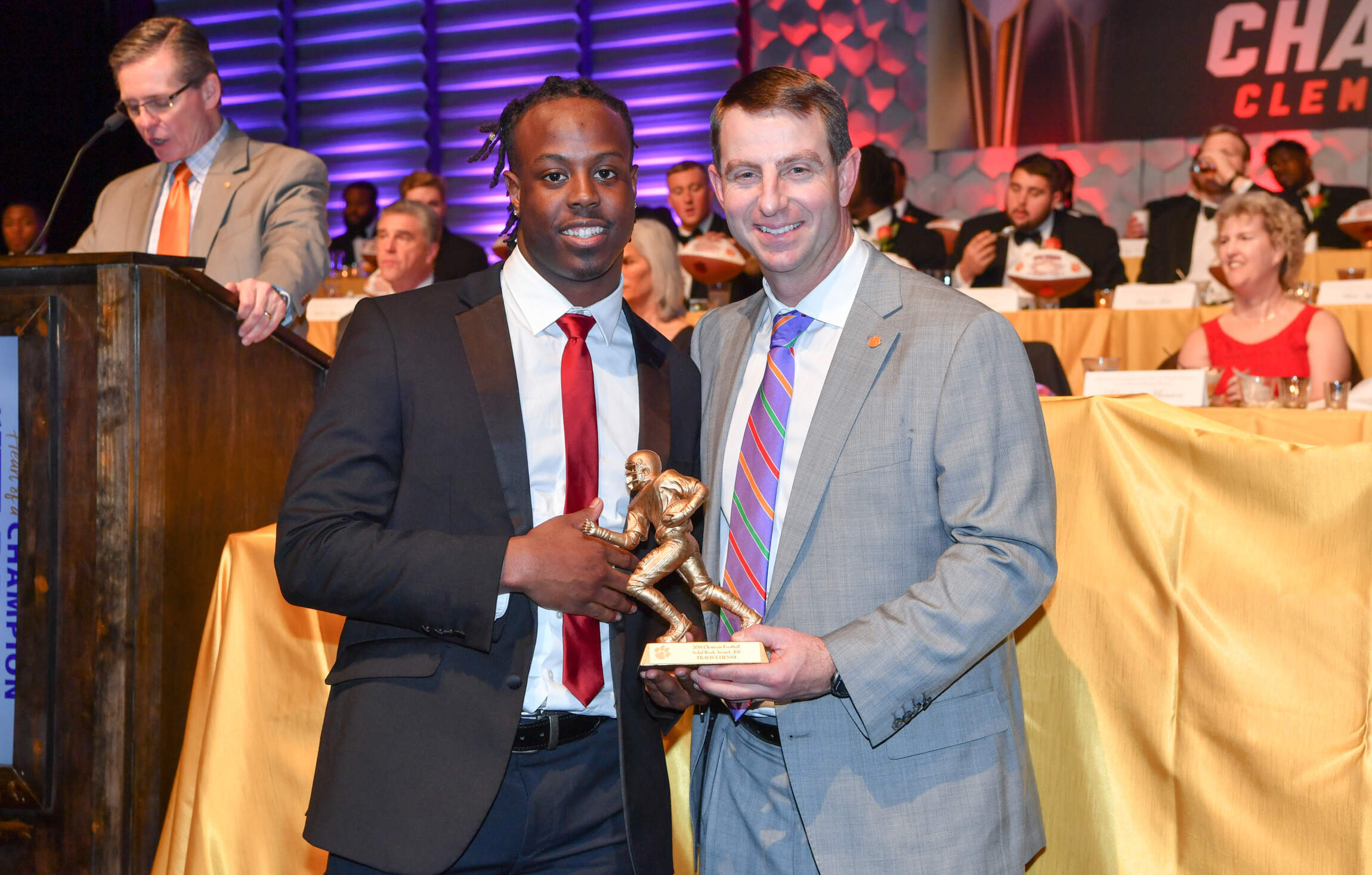 Etienne also cited the beauty of the campus as a contributing factor. A long way from home, Etienne’s favorite part of being a Tiger is life outside of football. The culture of the school and family atmosphere is something he has enjoyed. However, Etienne has had one major culture shock since coming to Clemson…food.

With food being a cultural difference, the biggest similarity between home and Clemson is the people.

“People are nice and genuine here,” explained Etienne. “They treat you with the utmost respect. Everyone has a good spirit.” 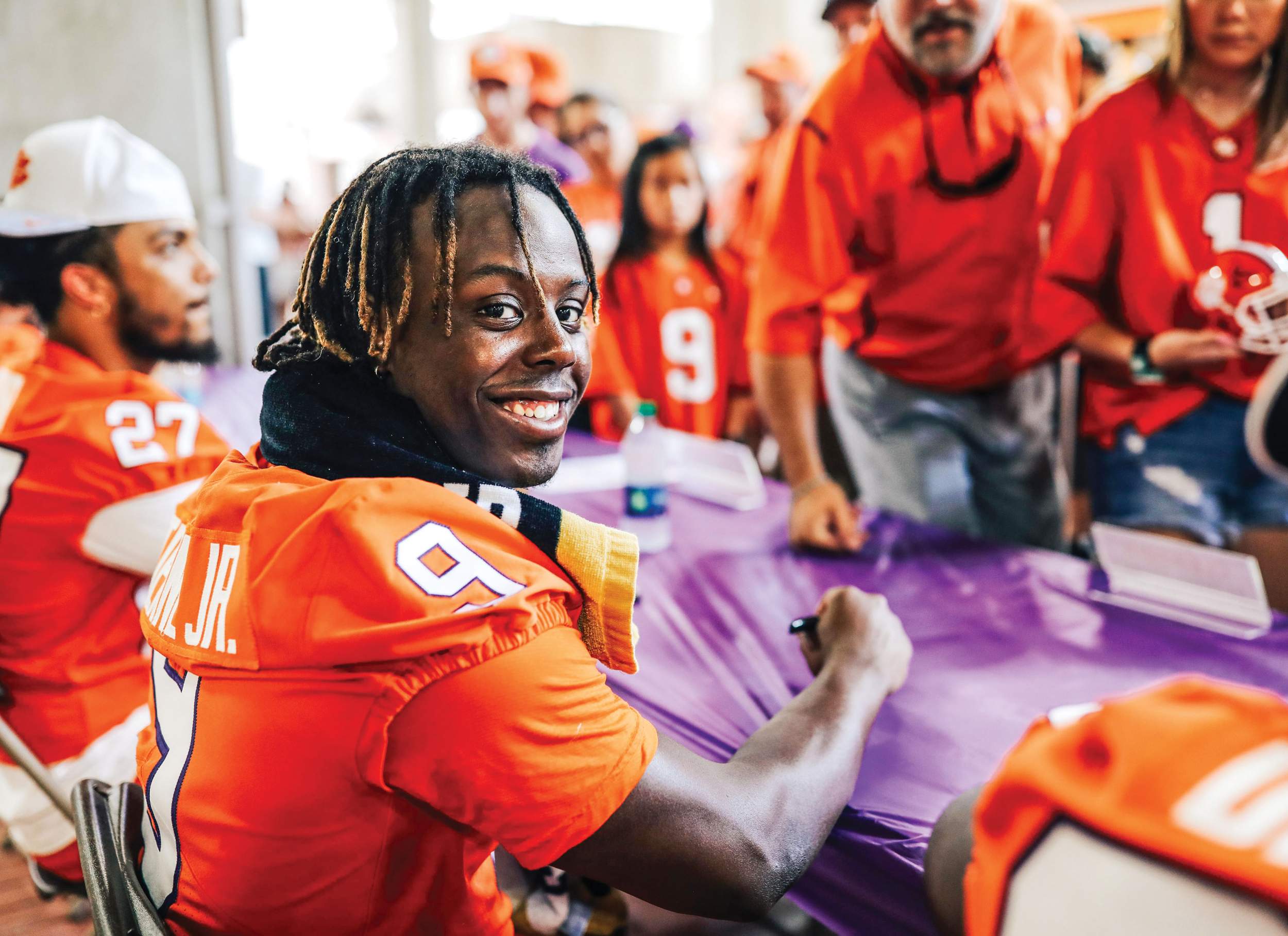 Etienne said his most memorable Clemson moment was winning the national championship last season with a 15-0 record. The satisfaction of all his hard work paying off and holding the trophy made the moment special, but it did not settle in for him at first.

“In that moment, it didn’t hit me at all. I felt like we had another game the next week. You don’t really notice the moment. The other night, I was laying in bed, and I thought, ‘We actually won the ‘natty.’ I was a part of that team, and we built something special that I’ll remember forever.’”

The 2018 season will always be memorable for him and the rest of the team because of that title, but Etienne’s freshman season in 2017 will also always be special. That season, Etienne burst on the scene, rushing for 766 yards and 13 touchdowns on just 107 carries. With 7.2 yards per carry, Etienne made big contributions immediately, but in the moment, he was just focused on contributing.

“Looking back on it, it meant a lot, but while it was going on, I was just trying to be the best teammate I can be. I was trying to be a role player for the team and do my part to help the team in any way I could so I could get on the field and produce.”

Etienne has certainly done just that. In his first two years, he amassed 2,424 yards and 37 touchdowns on the ground. In the 2019 opener against Georgia Tech, he had a career-high 205 rushing yards and three touchdowns, including a school-record-tying 90-yard touchdown run. He holds the Tiger career record for yards per carry (8.1), and he is third in career rushing touchdowns and fourth in career total touchdowns.

On top of those numbers, Etienne has earned a lot of hardware for his play on the field. He has received multiple All-ACC and All-America selections. In 2018, he was named ACC Player-of-the-Year as well as receiving the Blanchard-Rogers Trophy as the best college football player in or from South Carolina. These honors mean a lot to Etienne, but he was quick to deflect praise to those around him.

“It means the hard work pays off, and our coaching staff shouldn’t go unnoticed. I give credit to my offensive line. Without them, it wouldn’t mean anything. They are warriors, so without them, I wouldn’t be up for those awards.”

He has succeeded academically as well, earning All-ACC Academic honors.

“It definitely means a lot,” added #9. “We come here and we’re student-athletes first. Coaches say that how you do anything is how you do everything, so I want to strive to be the best in the classroom and on the field. It goes hand in hand. I believe that if you’re good on the field, you’re good off the field. That degree is going to take me a long way in life, longer than football ever will.”

Off the field, Etienne is also heavily involved with P.A.W. Journey, a leadership initiative focused on helping football student-athletes off the field. Etienne has been able to participate in multiple community service programs thanks to P.A.W. Journey. 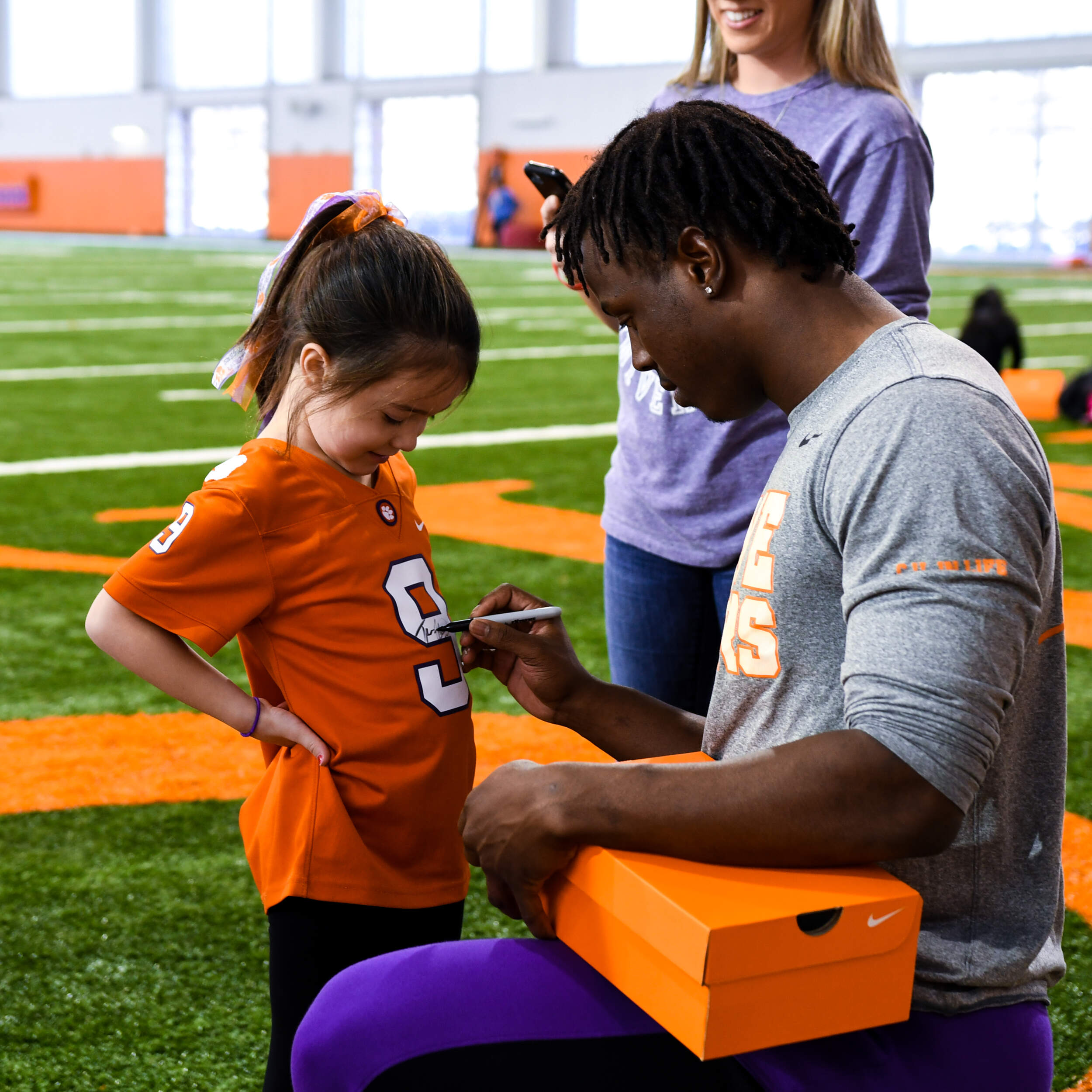 “It’s given us different perspectives to show us that not everyone has it like you have it. You have to bloom where your feet are. You can’t take things for granted. P.A.W. Journey has provided us with a lot of opportunities to go out there and help each other, help kids and get a different perspective on life.”

Etienne’s biggest takeaway from his time with P.A.W. Journey is the phrase, “bloom where you’re planted.” Etienne has certainly done just that since planting himself in Clemson.

Both on and off the gridiron, Etienne has made a name for himself and left a major impact on the program. He is excited to continue to forge the brotherhood he shares with his teammates this season as he continues his Clemson Career. 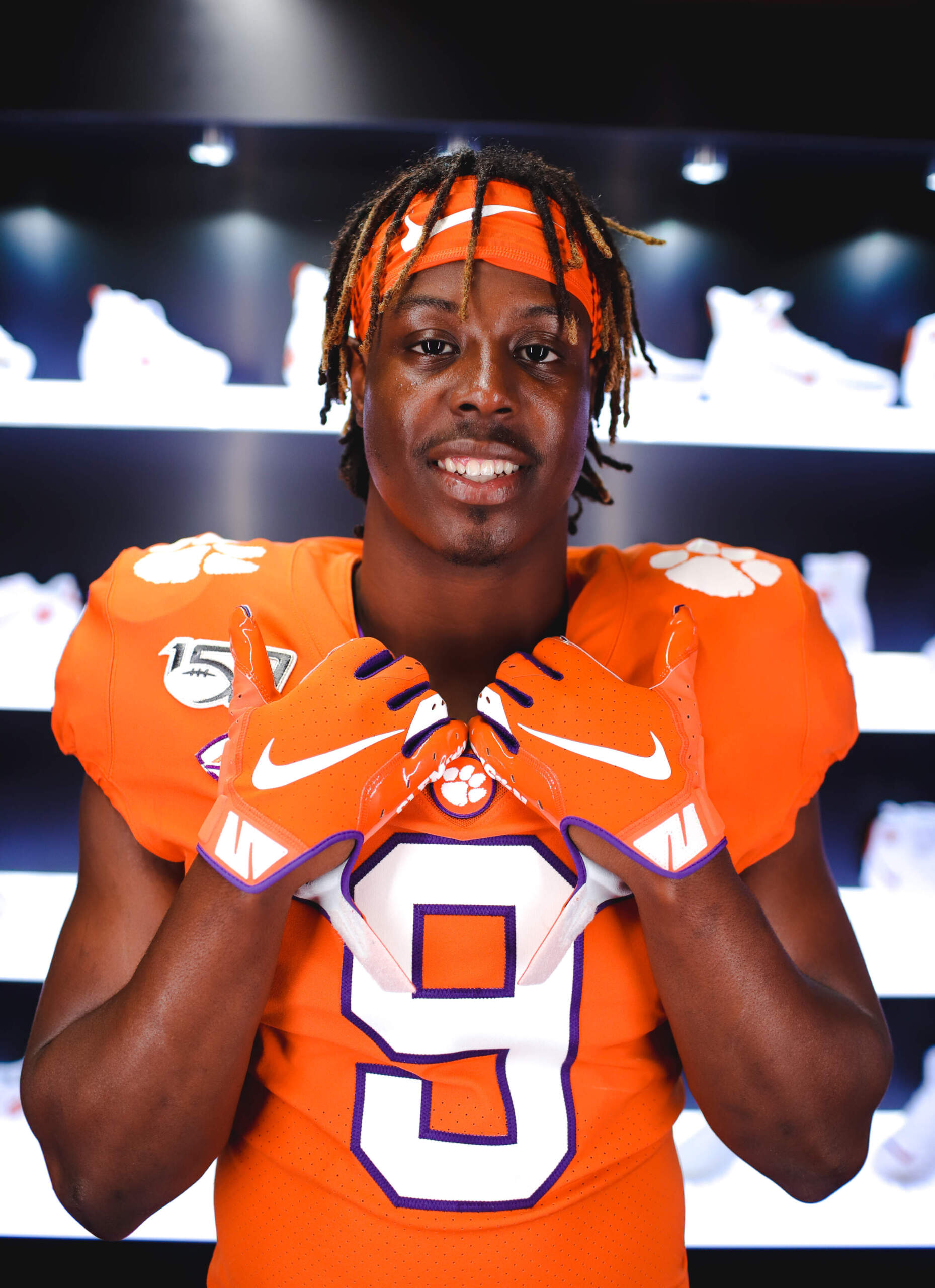