Our Story: Ending “The Streak”

I never thought I would see the day…

Can you blame me? Thirty-two times I had gone to Chapel Hill, N.C., with the Clemson men’s basketball team, and 32 times I had come home disappointed.

Friends always tried to cheer me up. “Sometime in our lifetime it is going to happen.”

But I realistically said to myself that friends probably told Bob Bradley the same thing when he attended games there between 1955-99. He saw almost as many games there as I did and never saw a win in his lifetime.

That is why I talked about “Mr. B” on the Clemson radio broadcast after the final horn sounded in Clemson’s 79-76 overtime victory at the Smith Center on Jan. 11, 2020, the program’s first win in Chapel Hill after 59 consecutive losses in games that dated to 1926.

It had been a streak talked about in the national media ever since I came to Clemson in 1978 when the streak was only 27 games old. Even this year, with the Tiger football team preparing for an epic undefeated National Championship Game matchup with LSU, I still got five calls from national media members about my perspective 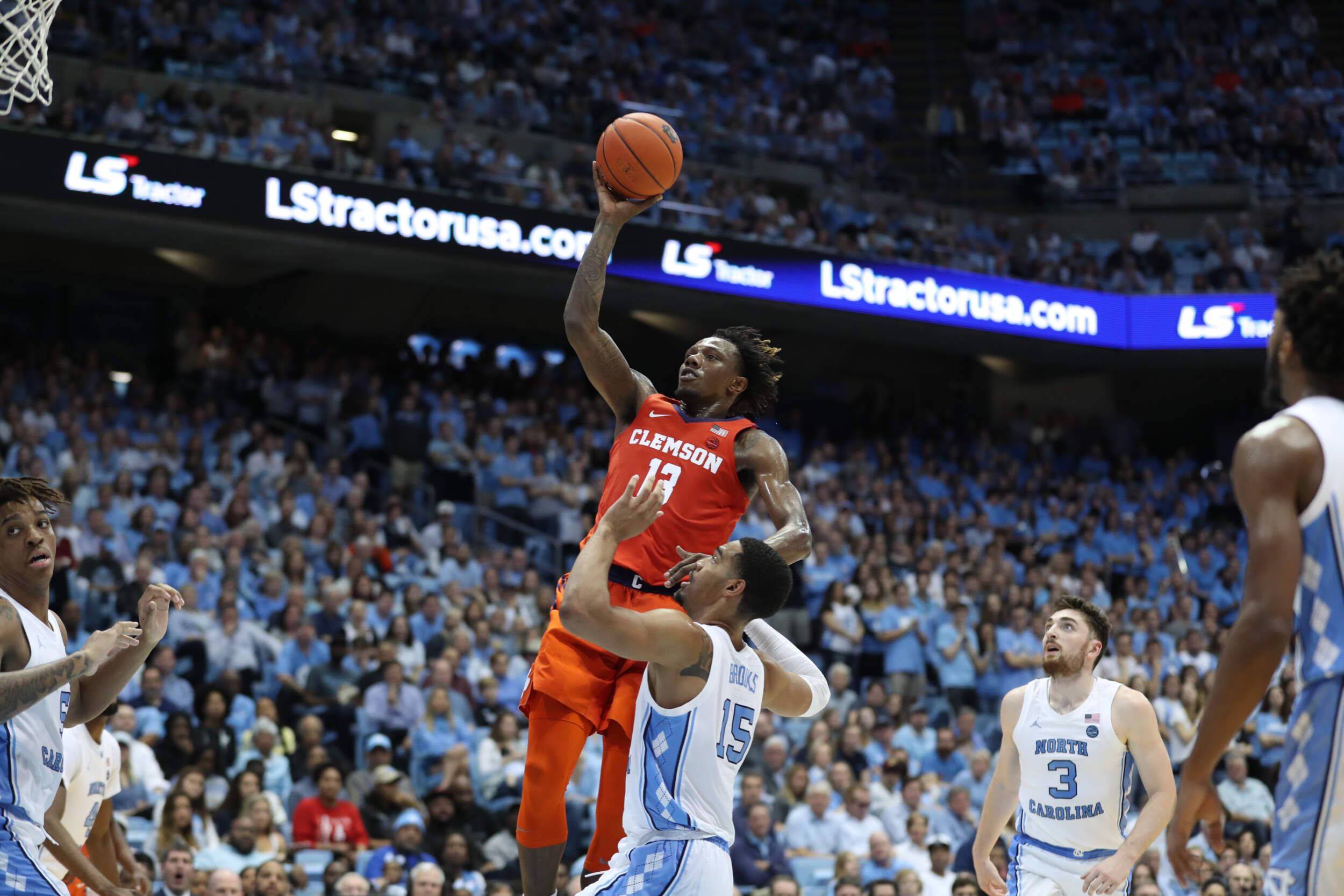 When I worked the Ryder Cup in Paris for NBC Sports in September of 2018, NBC did a recap of the most famous road losing streaks in sports history. Producer Tommy Roy put me on camera from my position in the 18th tower when he talked about Clemson’s 59-gamer in Chapel Hill.

Clemson had come within five points or lost in overtime against the Tar Heels in Chapel Hill just seven times in the previous 59 games, and I had been there for four of the seven. There was a 73-70 loss by Clemson’s Elite Eight team in 1980, a 77-72 loss to North Carolina’s eventual National Championship team of 1982 and a 68-66 loss in Larry Shyatt’s era.

I will never forget Rick Barnes’ last trip to Chapel Hill with the Tigers, an 87-79 defeat when the Tigers were whistled for 41 fouls and finished the game with just four players on the court. Clemson actually outscored North Carolina 8-6 during those last 70 seconds as Terrell McIntyre hit a pair of 3-pointers. Stealing a hockey term, I said on the air that he now led the nation in “short-handed goals.”

The all-time heartbreaker for me took place in 2008. Clemson had an 11-point lead at the half, a 15-point advantage with 8:55 left and an 11-point lead with three minutes remaining. But the Tar Heels worked their magic, got the game into overtime and then won 103-93 in double overtime.

When the game ended, I looked down press row to Woody Durham, the longtime play-by-play broadcaster for North Carolina. He had seen more games of the series than I had. We instinctively looked at each other at the same time and just shook our heads in amazement.

Many felt the Tigers had a chance to end the streak on this late Saturday afternoon in 2020 because North Carolina had been struggling. Roy Williams’ team had lost two in a row at home, a sound thrashing to Georgia Tech the previous Saturday and a loss to Pittsburgh in the following midweek game. Pittsburgh had lost 22-consecutive ACC road games.

After the Pittsburgh game, I saw a note where North Carolina had won 109-straight games with at least a 5-point lead at the half at the Smith Center. Heck, that streak was 50 games longer than our losing streak in Chapel Hill. Maybe there is a chance!

Just before tipoff it was an electric atmosphere. A nearsellout crowd of 21,077 were in attendance as the home team took a 39-29 lead at the intermission. Everything had gone well for the Tar Heels with the exception of the last Clemson possession, as freshman Al-Amir Dawes hit a 25- foot 3-pointer to cut North Carolina’s lead from its largest of the game, 13 points, to 10. 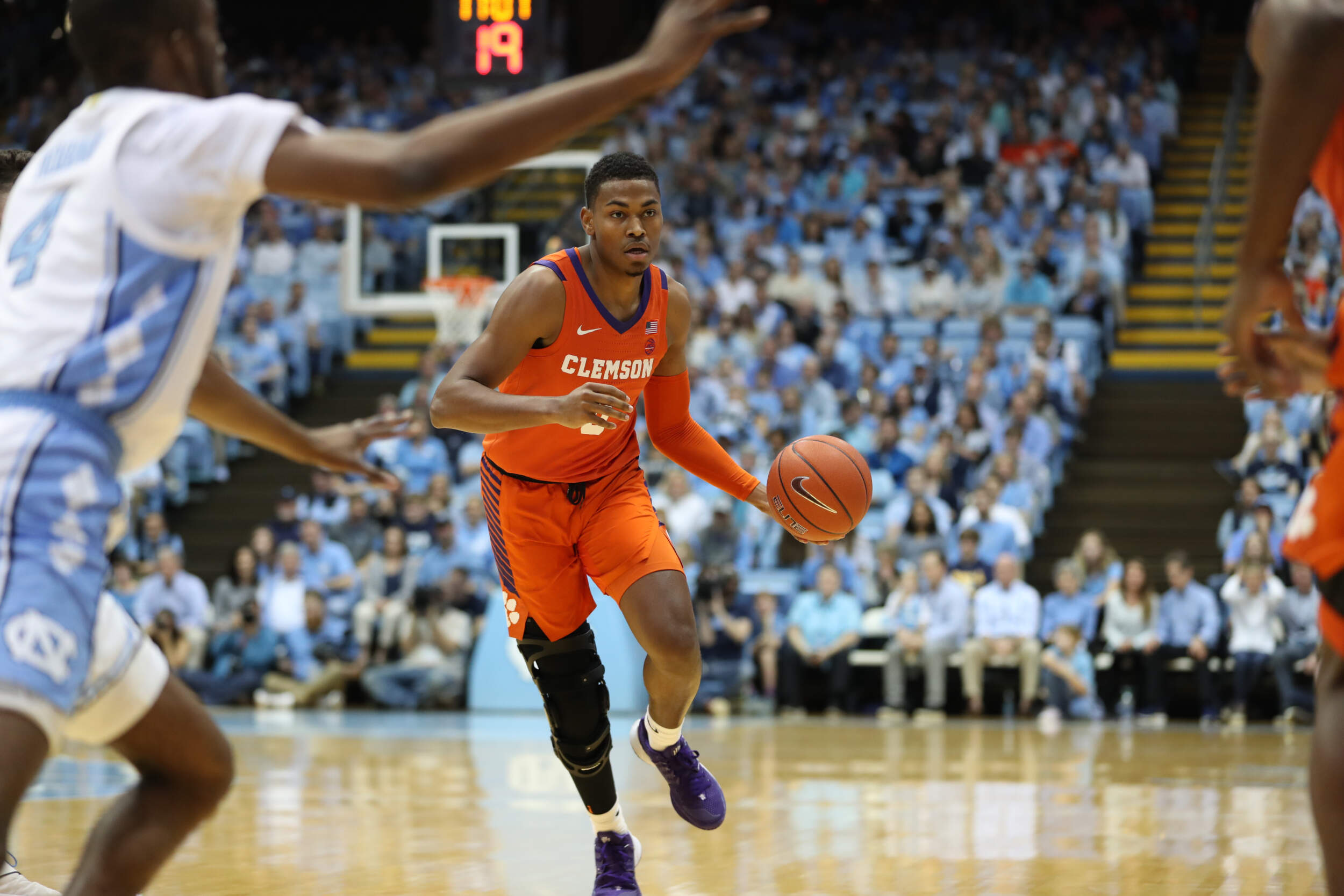 Many coaches in football and basketball talk about the first five minutes of the second half being key, and they were in this game. It took Clemson just 3:46 to cut the margin to four points, 43-39 on another 3-point shot by Dawes.

The Tigers had one more run in them and cut the margin to one at 68-67 with 34 seconds remaining. But Brandon Robinson, who had a game-high 27 points, made two free throws to give North Carolina a 70-67 lead.

Clemson moved the ball into the frontcourt, Simms took a pass from Trapp and buried a 3-point shot from the left wing to tie the game at 70-70 with 3 ½ seconds left. Williams anguished about the play after the game as he forgot to tell his team to foul so as to not allow a Clemson player to take a 3-point shot. North Carolina’s final attempt at a long game-winning three missed, and we went to overtime.

Clemson jumped out 74-70 in the extra session, but North Carolina then tied it at 74. Clemson led by just 77-76 with 36 seconds remaining after a field goal by North Carolina’s Armando Bacot, who had 21 points on the night. Clemson would need a score to go up three, and Simms provided it with a driving shot from the left.

Simms had a game for the ages. In addition to the game-tying 3-pointer in regulation and the key field goal in overtime, he led Clemson in scoring (20), rebounding (8), assists (6), blocked shots (4) and steals (3). That is a quintuple leadership, if you will.

I had talked many times with longtime broadcaster Billy Packer about the streak. He called many of the games in Chapel Hill for Raycom Sports. I always told him after he retired that if we ever won in Chapel Hill, he would be the first person I called.

He picked up the phone and was surprised to hear from me. Long since retired, Packer has other interests and did not even know the two teams were playing. But the 82-year-old is still as sharp as ever and wanted to know all about the game.

Almost lost in the glory was the fact that Brownell had tied the Clemson record for victories by a Clemson basketball coach. And he had done it with this epic win. He received over 250 text messages after the game. 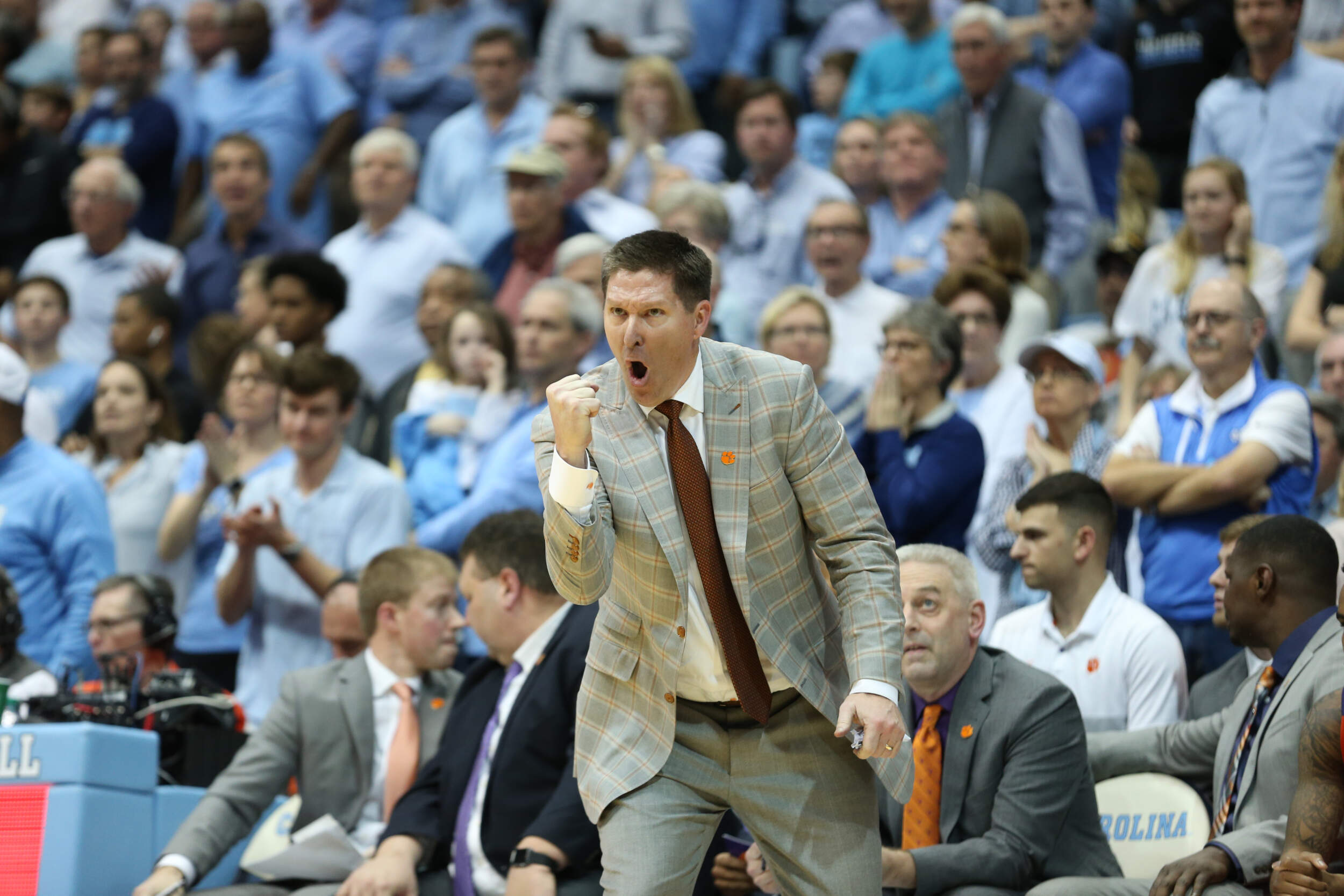 But the story does not end there. The following Tuesday, Jan. 14, 2020, third-ranked Duke and Mike Krzyzewski were at Littlejohn Coliseum. They had won nine in a row, including a 5-0 start in the ACC and had a 15-1 record, with the only loss on a fluky last-second play at home against Stephen F. Austin. They entered the game with an average margin of victory of 21.3 points, the best in the nation.

When I interviewed Coach Brownell for the pregame show, I finished by saying, “Well, Coach, you beat a Hall of Fame coach to tie the Clemson record for wins. Would not it be something if you beat another to set the record?”

Brad did just that with a 79-72 victory over the Blue Devils. Ironically, the Tigers had the same point total in both games, and, once again, Simms was a star. The junior shot 10-of-15 from the field, scored a career high 25 points and had nine rebounds and five assists.

Tevin Mack added 22 on 10-of-14 shooting, as Coach K and his players never figured out the Clemson offense. The Tigers shot 58 percent from the field for the game, the best against Duke all year. In fact, only one other team had shot north of 50 percent against the Blue Devils. 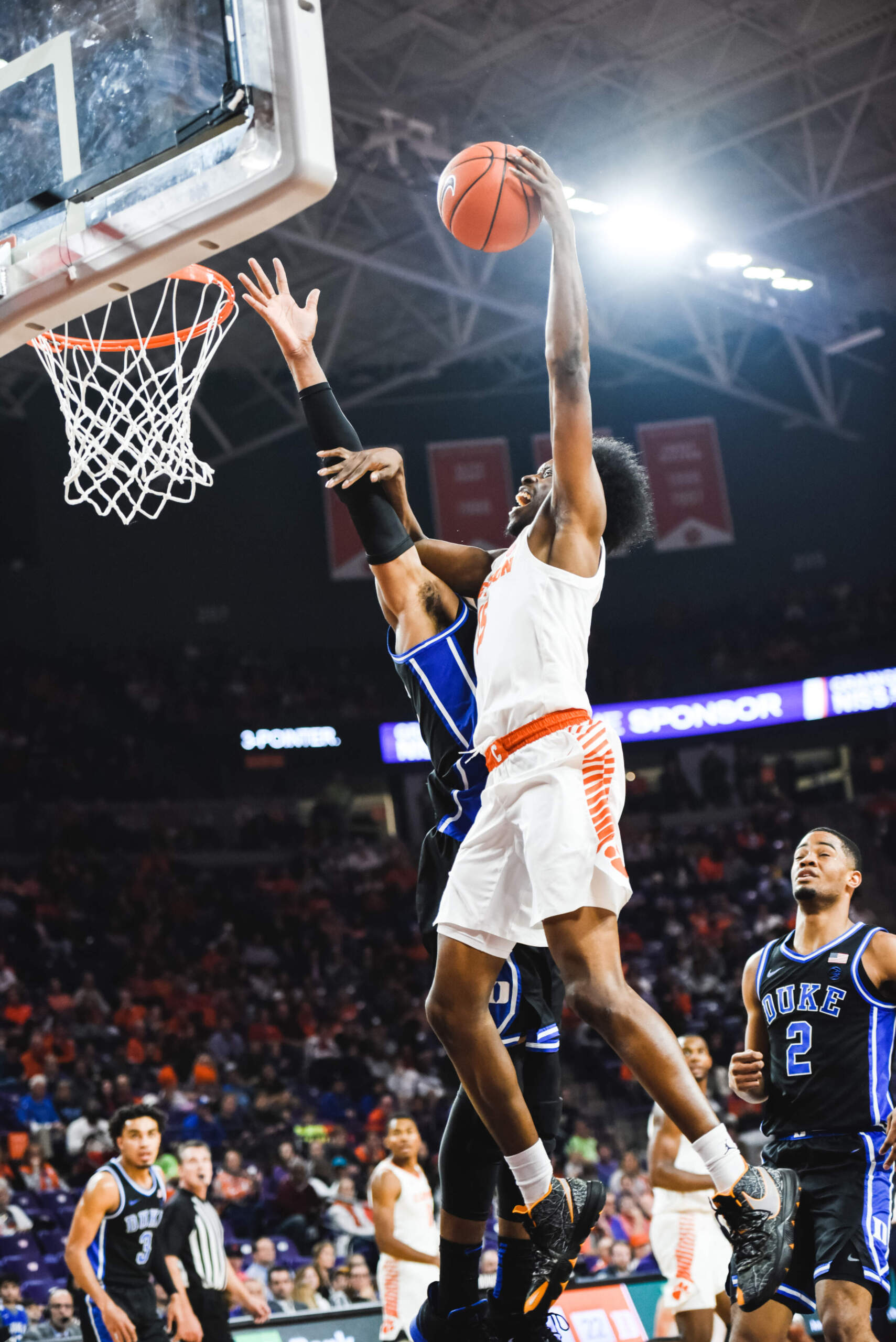 I have been covering Clemson basketball for 42 years. There have been some noteworthy back-to-back victories, but Jan. 11-14, 2020, will not take a backseat to any on the list. I will remember the four-day period for the rest of my life.