Orange & Purple: It Runs in the Family

Note: The following appears in the Furman gameday football program

Freshman setter Gabby Easton, like many other young Clemson fans, remembers attending football games frequently with her parents as a child. In fact, she could not recall missing a single game in Death Valley until she was 14 or 15 years old, when she began traveling to volleyball tournaments on the weekends.

“It was just a part of our family, a part of what we did,” said Easton. “Every Saturday, we would go to football games, and on Sundays, we’d get up and go to church. We’d have tailgates and cookouts with our friends and their families. Clemson is filled with such great memories. Tons of my childhood memories were made right here in Clemson.”

But Easton’s ties to Tigertown go beyond attending home football games. Her father, Lance, and mother, Becky, met at Clemson and were Tiger student-athletes. 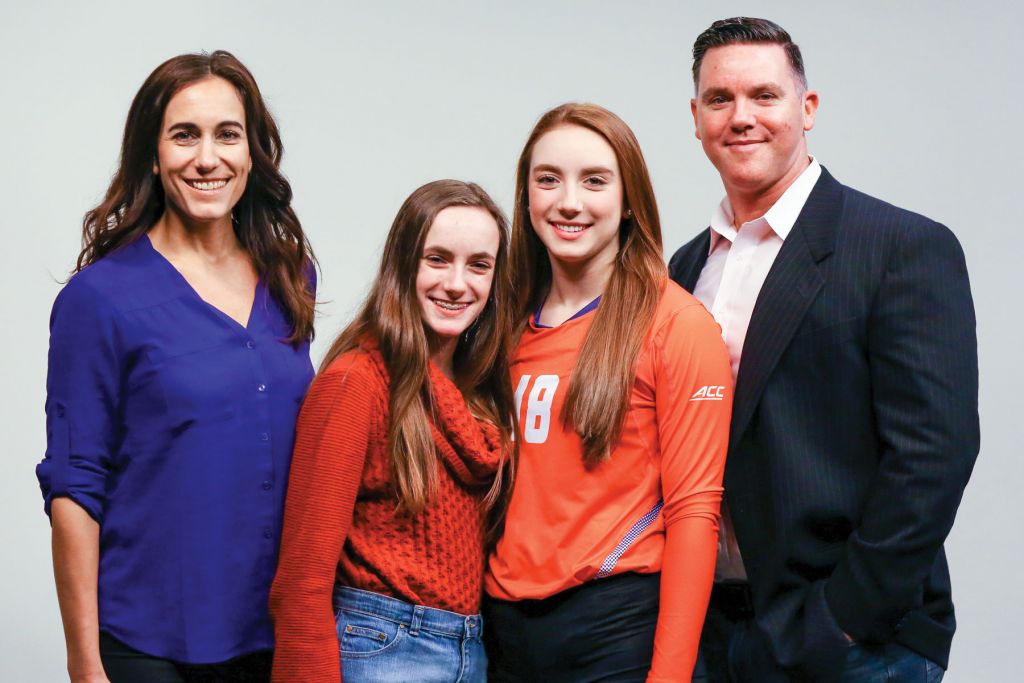 “Both my parents played sports at Clemson. My mom was a setter on the volleyball team, which is special to me because I’m doing the same thing she did here. My dad played quarterback and wide receiver for the football team.”

Becky lettered in 1993 and later became Gabby’s volleyball coach at T.L. Hanna High School. Lance lettered on the 1991 ACC championship team, which beat Duke at the Coca-Cola Classic in Tokyo, Japan to go undefeated in ACC play. He also lettered in 1992.

After taking up volleyball as a youngster, Gabby started to attend Clemson volleyball matches in Jervey Gym.

“That’s really where I started to learn about setting. My mom would take me to Jervey Gym when I was a kid and would tell me to watch whoever the setter was on the team that year so I could learn from them. She’d tell me, ‘You need to study and mimic her if you ever want to be like her and play in college. You have to start training and working really hard,’ which is what I started doing.”

Her hard work certainly paid off, putting her on the same path as her mother as a setter for the Tigers. On May 18, Tiger head coach Michaela Franklin announced the signing of Easton to play volleyball for the Tigers.

Easton, who is majoring in health science, made her Tiger debut in Clemson’s exhibition match against Furman on Aug. 18, which resulted in a 3-1 Tiger victory. She tallied more than 30 assists and two blocks in the match.
Easton is more than confident that Clemson provides a path toward success, but she knows success only comes with the hard work, the same way in which her mother told her years ago as an aspiring college volleyball player in Jervey Gym.

“I want to leave here with a few ACC championships and maybe even a few national championships. I don’t think the goals can ever be too high. It all starts with winning each and every day, winning practice, winning workouts every single day, and that’s what I’m here to do.

“Both of my parents found success here, and that’s really what I want for myself. I want to be happy and successful and to finish all four years here.
“On the academic side, I want to build great relationships with my professors and be involved with the community as much as possible.”