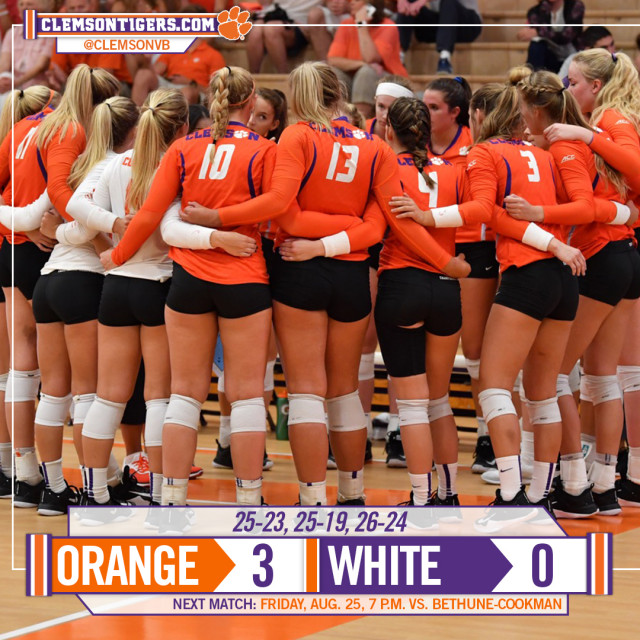 Orange Comes Out On Top In Scrimmage

“I thought today went really well,” first-year head coach Michaela Franklin said. “It was an awesome opportunity for our girls to get in here and get the first-game jitters out of the way as well as for us, as a new coaching staff, to give it a trial run and make some adjustments from a coaching standpoint. We had an awesome turnout with a great crowd that stuck around afterwards and got to eat with the team and engage with them.”

Seven of the team’s 17 players took the floor at Jervey Gym for the first time, including five freshmen and two transfers in Kaylin Korte and Caroline Pearson.

“Kaylin Korte brings a competitive intensity to the court, regardless of what the score is, she definitely brings out that intensity and she is a huge competitor for us.”

With regards to the team’s five freshman in Chloe Anderton, Alyssa Deloney, Lexie Dorminy, Madi Howell and Lisie Kit, Franklin said, “I thought that all of them did a good job holding their own, but also staying focused on the technique that we’ve been working on, which allowed them to have a good day.”

Clemson’s season opener is set for Friday, August 25, as the Tigers host Bethune-Cookman in their first match of the Big Orange Bash at 7 p.m. Admission is free to all regular season home matches in Jervey Gym.