When people around the country hear the word “Clemson”, they think Death Valley, the Rock, The Hill, Dabo Swinney, Football, Soccer and Golf National Championships and the Tiger Paw — but there’s more to Clemson than that.

In the collegiate realm, Clemson competes “above its weight class” when compared to its peers in terms of enrollment size, living alumni base, population in the state and even in the television market. However, one big attribute that Clemson holds is the statement:

“I am a proud to be a Clemson Tiger!”

People ask why and the best answer to the question is:

That pride comes from being associated with a Land Grant Institution, wearing a Clemson Ring, singing the Alma Mater, knowing the Paw can be in only orange or white and has to be tilted to 1:00, and, probably the most telling reason, Clemson’s long-standing military heritage.

As many are aware, Clemson University was originally a military school, reflecting the belief at the time, that a military atmosphere produced the highest academic excellence. During World War I, 1,549 Clemson men served in battle, and 32 made the ultimate sacrifice. There were more than 6,500 Clemson men in World War II, 90 percent of whom were officers commissioned as a result of ROTC training at Clemson. Of these men, 376 gave their lives.  As an appreciation of the ultimate sacrifice, Clemson Athletics maintains a tradition of hosting Military Appreciation Day in Memorial Stadium.   This tradition, since 1994, has become an event that many professional teams and universities attempt to emulate.

Beginning with the first graduating class of 1896, more than 10,000 Clemson men and women have served in the armed forces. Many have been highly decorated for their service and sacrifices. Some received the nation’s highest military decoration — the Medal of Honor — for acts of heroism in combat.

Several were captured and held as prisoner of war. And 491 alumni have made the ultimate sacrifice in service to their country.

On March 18, 2018, Retired S. Army Col. Ben Skardon, 1938 graduate of Clemson University and long-time resident of Clemson, SC a 100-year-old survivor of the Bataan Death March and revered alumnus and professor emeritus of Clemson University, will be presented a Filipino World War II Veterans Congressional Gold Medal in a ceremony at White Sands Missile Range, New Mexico, Saturday.  The Congressional Gold Medal and the Presidential Medal of Freedom are the highest civilian awards in the United States.

Clemson Athletics has been hosting an annual Military Appreciation Day at football games, dating back to the inaugural day on November 12th, 1994 which included four F-16’s flying over Memorial Stadium during the playing of the National Anthem;

On the Clemson campus, there are two significant areas honoring and recognizing the Military history.

The Military Heritage Plaza was created to honor the University’s history as a military institution and to honor Clemson alumni who have served the United States in times of war. It sits between Memorial Chapel and Bowman Field, which served as Clemson’s earliest military drill complex. The 18 steps in the memorial are inscribed with an ideal instilled in the Clemson cadet — discipline, teamwork, confidence, humility, equality, courage, respect, responsibility, perseverance, honor, pride, esprit de corps, leadership, integrity, success, loyalty, life and duty.

Following each Athletic event, Clemson fans, students and student-athletes honor Clemson’s history with the singing of the Clemson Alma Mater. People ask, do they wave at the end of the song?  Easy answer, during Clemson’s early military days, freshmen wore rat caps and waved them in the air during every football game. Today, at the conclusion of singing the alma mater, students and alumni still wave their hands in the air with thumbs folded underneath as though holding a cap.

When Clemson Athletics became aware of Operation Hat Trick (OHT), Dot Sheehan, ’47 Brand, and the other collegiate licensees who participate in the Operation Hat Trick program, there was an immediate fit and need to bring these groups into the Clemson Family.

Although Clemson Athletics has worked with OHT and ’47 Brand, it was an executive from ’47 Brand attending a Clemson Football game in 2017 saying, “we can do some good things here” that made things take off.

Due to the partnership between OHT, ’47 Brand, IMG College Licensing and others, as well as the support of Clemson fans, during 2017-18,

Clemson sold more O.H.T. product than any other school in the college space. 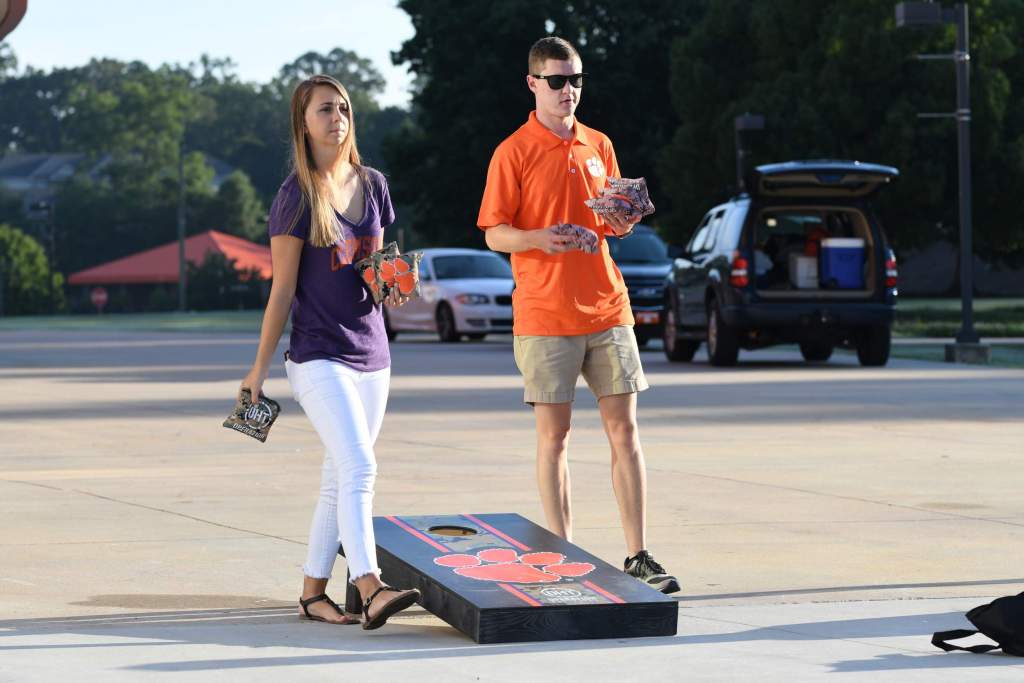 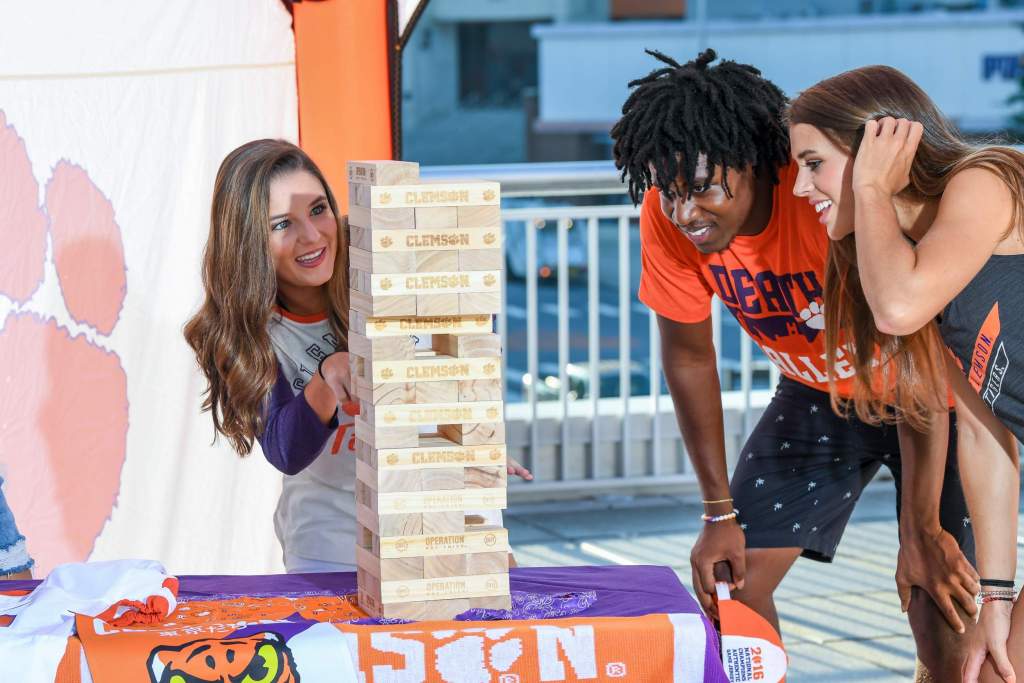 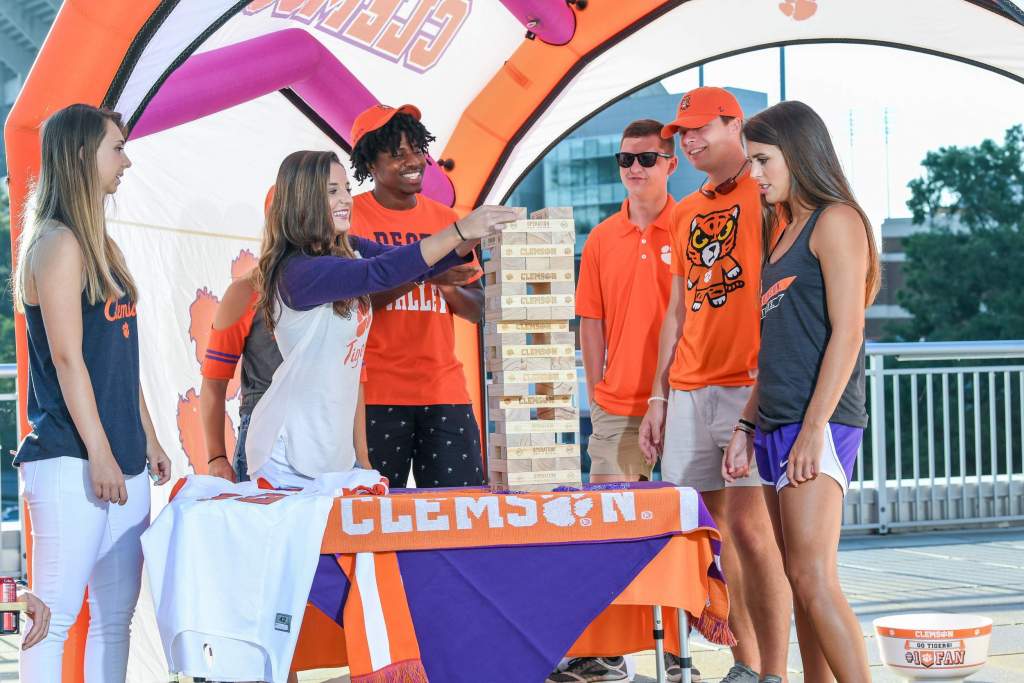 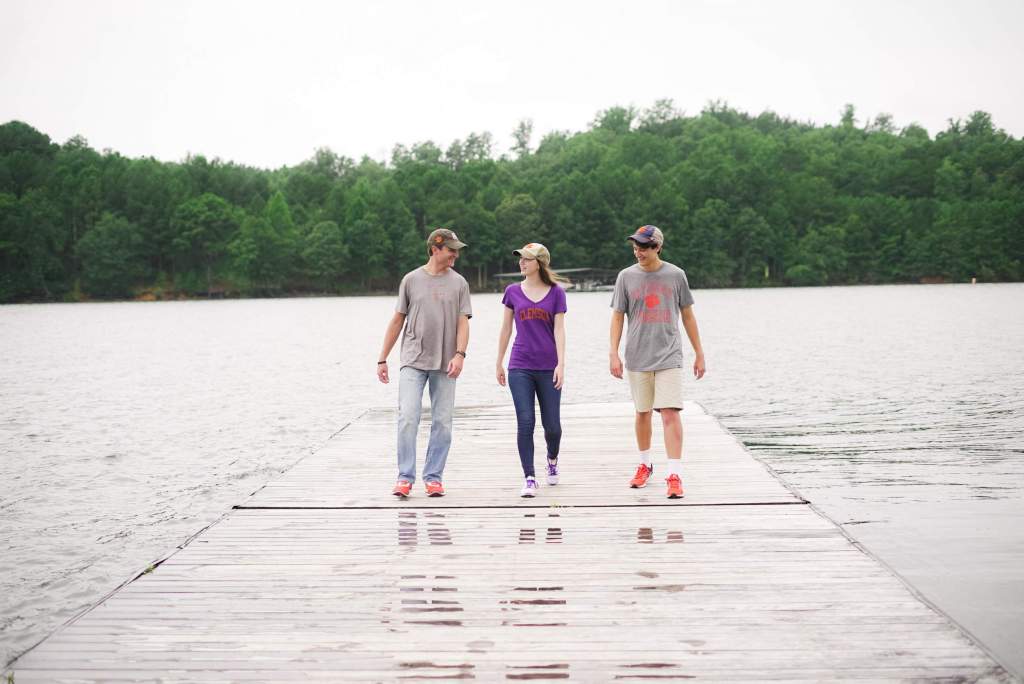 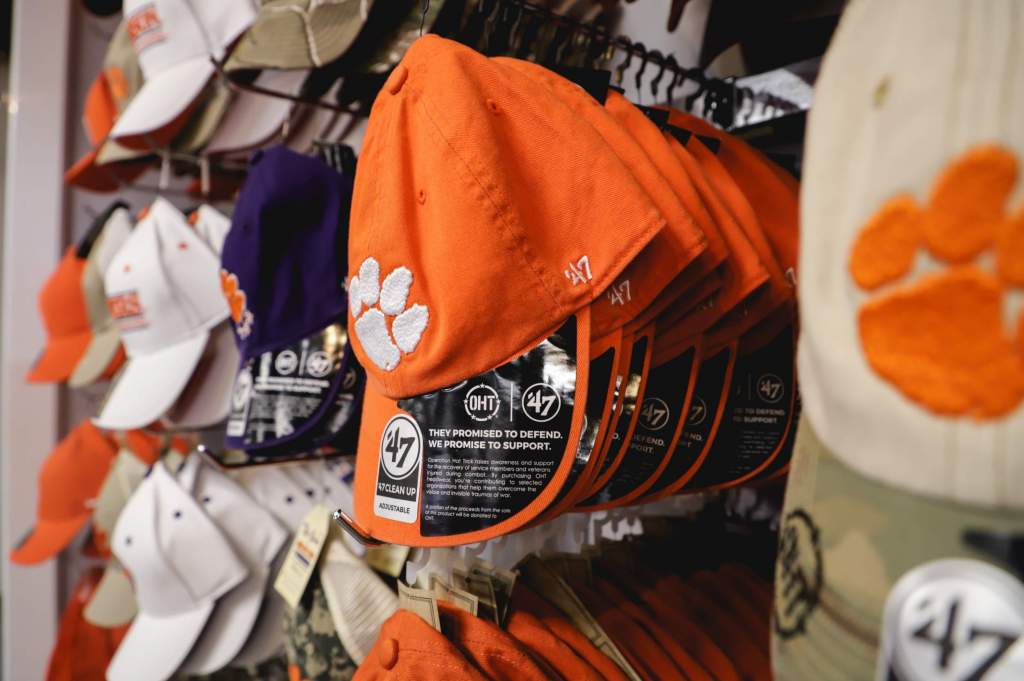 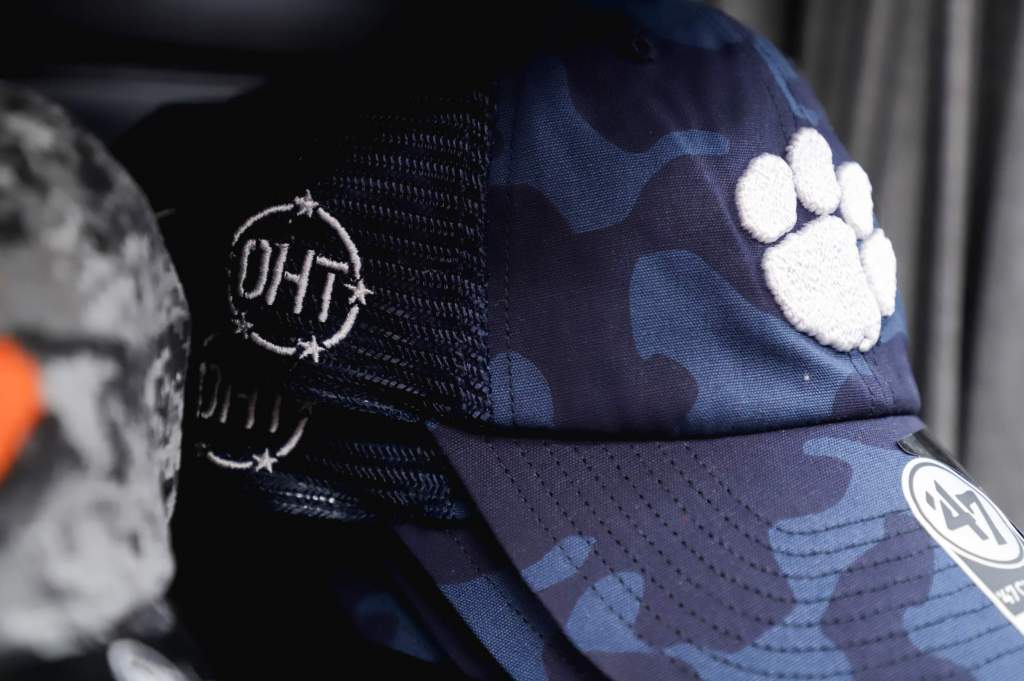 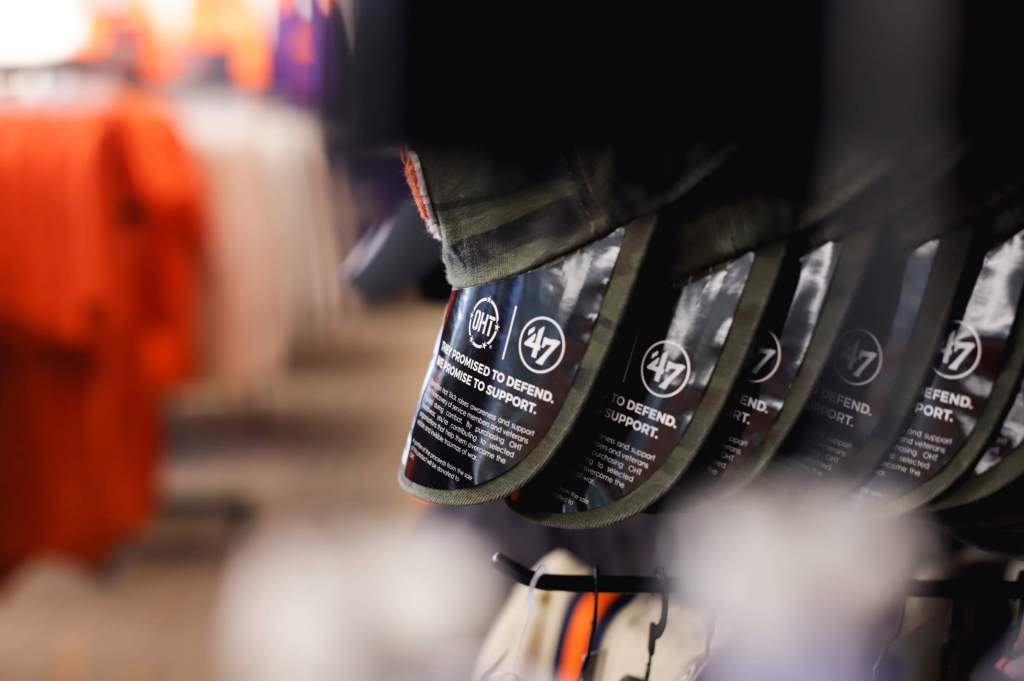 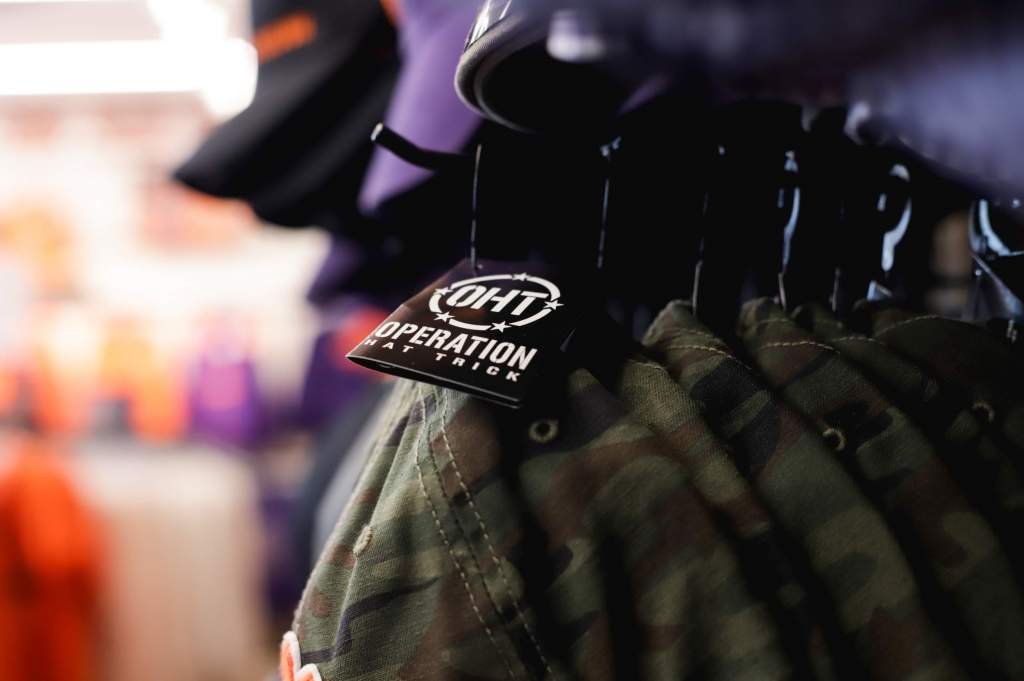 In addition, for Clemson University’s outstanding marketing efforts in aiding the recovery of wounded U.S. combat service members and veterans, it was named a finalist for a 2018 Excellence in Service Award.  In recognition of the school’s impact, OHT made a $2,500 donation on the Clemson’s behalf to Purple Heart Homes, Golden Corner Chapter.

“I have to tell you again how much it means to us to get the $2,500 for Jason Livingston.  Your call on Monday when we were working on the ramp for the veteran gave us that extra energy to finish. This is my priority for the summer and Operation Hat Trick will be one of our main partners for making this happen so quickly.  Thank you…thank you…thank you!”

So the next time that someone brings up Clemson, Memorial Stadium, Football, The Hill, the Rock and the conversation turns to the Military heritage of Clemson, remind them of the story of how Dot, Operation Hat Trick, ’47 Brand, other licensees, and Clemson fans are making a difference for veterans like Jason.

Thank you for supporting Clemson’s participation in the OHT program.