HAMPTON, N.H. – Operation Hat Trick (OHT), a non-profit organization dedicated to supporting wounded U.S. combat veterans, has recognized Clemson University’s outstanding efforts in aiding the recovery of wounded U.S. combat service members and veterans by naming the school a co-winner for its 2019 Excellence in Service Award. In recognition of the school’s impact, OHT will make a donation to Purple Heart Homes Golden Corner Chapter on the University’s behalf. Operation Hat Trick Founder and President Dot Sheehan presented the Excellence in Service Award on May 22 in Atlanta.

Clemson was one of four finalists that included co-winner The University of Arizona, the University of South Florida and Utah State University.  The finalists were chosen based on their efforts to fully integrate OHT on their campuses through a presence in their bookstores and other retail outlets; promoting veterans’ causes through their social media properties and advertising campaigns; and generating additional revenue that will be used to support the recovery of wounded service members and veterans.

Clemson’s efforts generated thousands of dollars in donations to help veterans recover from the visible and invisible injuries suffered in combat. 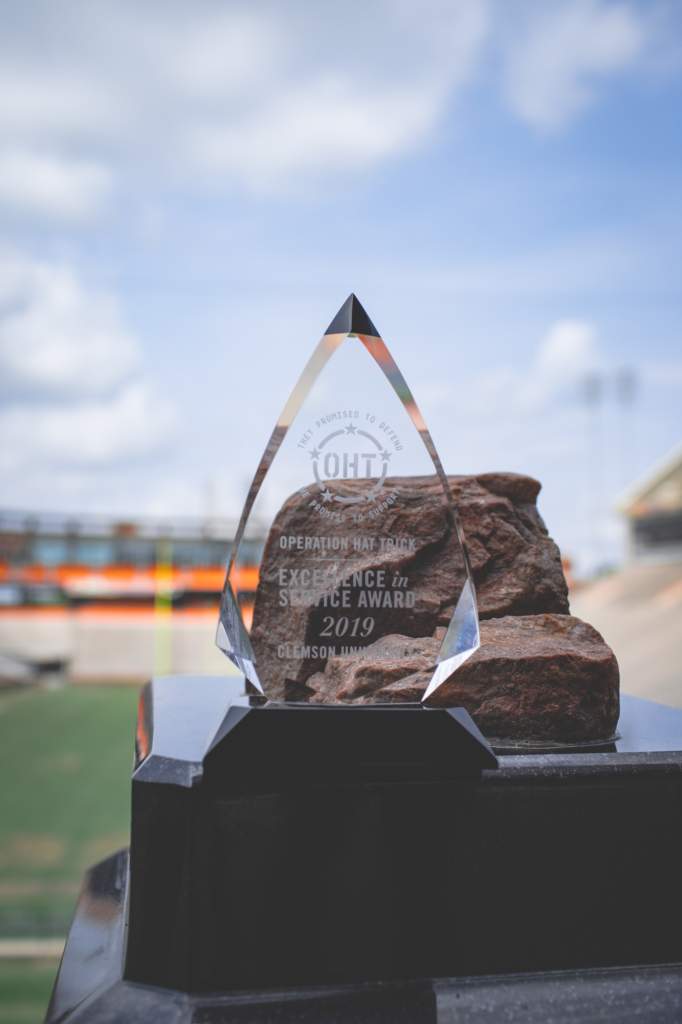 ““It is truly amazing to see the impact of OHT on Clemson University and our surrounding communities,” said Mike Money, Assistant Athletic Director for Marketing at Clemson University. “Through OHT and all of its licensing partners, Clemson has been able to identify and strengthen relationships with local Military organizations and make a difference in the life of veterans. Clemson has a proud Military heritage, and OHT's mission is aligned with what we strive to accomplish in honoring our servicemen and servicewomen, past and present, who have sacrificed so much.””

A portion of each sale of OHT branded merchandise is donated to select organizations that support the recovery of wounded service members and veterans. Through the sale of branded merchandise and member donations, Operation Hat Trick donations have helped dozens of organizations that provide direct services and support to wounded service members and veterans. They include Walter Reed National Military Medical Center, Veterans Count, the Navy SEAL Foundation, the Travis Mills Foundation, Liberty House, Project Sanctuary, Semper Fi Fund and the Yellow Ribbon Fund.

“Our partners at Clemson have shown the kind of commitment and devotion to our veterans we’re hoping to inspire nationwide,” Sheehan said. “Raising funds is a critical part of meeting their needs, but equally as important is raising awareness of veterans’ struggles so we never forget our obligation to help them overcome their injuries and enjoy full lives.”

OHT generates awareness, support and funding for the recovery of America’s wounded service members and veterans. The organization pursues these goals through the sale of OHT branded merchandise, proceeds of which are distributed to selected organizations supporting the OHT mission. Operation Hat Trick is supported by more than 400 universities and colleges, 130 high schools, 21 National Hockey League teams, 15 NBA teams, more than 80 Minor League Baseball teams, and over 90 companies. For more information, to give online or to purchase OHT apparel and merchandise, visit www.operationhattrick.org.  To receive their newsletter, text OHTBriefing to 22828.