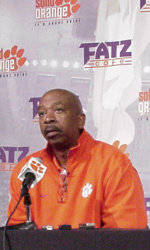 On the Season Opening Tournament We are obviously very excited about the Cox Communications Classic. We have some butterflies now, which I think is a good thing. That means the season is upon us. Our training camp has gone well and I think it is important that we finish it off with three good practices this week going into the tournament opener on Friday.

We open with Arkansas State, a team that we are still learning about because they have a lot of new players.

They do return their leading scorer from last year, Isaac Wells who is a fine all-around player. He is a first-team All-Sun Belt selection for the preseason. Yual Banks is a senior guard who was a third-team preseason all-conference player. They also have a junior college player named Adrian Banks who was a junior college All-American. He scored 30 points in one of their preseason games. Obviously they have guys that can put the ball in the basket and are very athletic. They have got one kid on their roster that is 6-11, but mostly their guys are 6-7 or 6-8, and they kind of remind you of our team in terms of athleticism. It should be an interesting match up.

The rest of the teams in the tournament we aren’t really too concerned with right now because we think Arkansas State will be a formidable challenge in the opener. We will play Monmouth in the second game. We you think about them, you think of their match up zone and they were an NCAA participant last year as a conference champion.

Of course there is Old Domnion, my alma mater, a very good basketball team that reached the Final Four of the NIT last year. They have won 52 games over the last two years. We know what kind of talent and what kind of teams come out of that league because they are in the same league as George Mason and Hofstra. It is going to be a challenge from the start.

Obviously three games in three days is something that this team cannot be used to at this point. Generally you open up with one game and you get to regroup catch your breath and change mistakes and then two or three days later you have another game. We don’t have that luxury in this type of event. At the same time we will find out a lot about our players, the team and it’s depth issues in those three days.

Starting Five Vernon Hamilton is our senior at point guard and co-captain and we are counting on him for leadership. The other co-captain is Cliff Hammonds at the other second guard spot. He is a junior and we feel good about the experience that we have in the starting backcourt. Both of those young men have played well in the preseason.

At the three spot we will go with another experienced guy, Sam Perry, who is also a a junior. He gives us energy and a defensive edge as well as a tremendous finisher inside. Then we will go with James Mays at the four spot. He played well in the preseason and I know that he is anxious to get started. And at the five spot we will have a freshman in Trevor Booker, who is a little undersized at the post at 6-7 for the inside, but he is very strong and has proven in the preseason that he can rebound at this level.

Depth The first place we look for depth is with Raymond Sykes and Julius Powell, who started some games for us last year. We feel that they can come in and give us a boost. And then we have got find some depth on our perimeter. We are looking at David Potter, another freshman who showed some bright spots in the preseason.”

Cliff Hammonds. I really look at him as a first team player as well.

Goals Since the opening of bell we have talked about going to the NCAA tournament and we continue to talk about that most every time we get together.

Vernon Hamilton “I’m very proud of Vernon. He started as a freshman and went through some growing pains against some very good talent, players that are in the NBA now. But, he learned from that experience and he has gotten better and better. Every year that we have gotten better he has become a better player. We are expecting a career best year out of him and we expect a great deal of leadership from him.”

K.C. Rivers/Cliff Hammonds Combo “We feel pretty good that Cliff and K.C. can handle the point guard position if we need them too. We have played those two together with Vernon sitting and we will see that some this season. Those two have played very well with Vernon out of the game. Rivers has played well and every time that we scrimmage he shows up and gets the job done regardless of where we put him. “

On coming back to ODU “Four years ago (when he took a team from Dayton) was tough emotionally because that was the first time I had been back with one of my teams. It was a tough game and we won by four (71-67). We got on the plane and got out of there. I don’t think I will feel the same amount of emotion that I did the last time. I still have some strong relationships with people at that school.”

Free throws “As I look at last year, I think that Vernon, K.C. and Cliff are all better shooters than they showed at the free throw line. They are good shooters and good three-point shooters. Those guys will shoot them pretty well and those will be the guys that handle the basketball down the stretch when we have a lead. But, we won’t know for sure if we are better until we start playing the games.