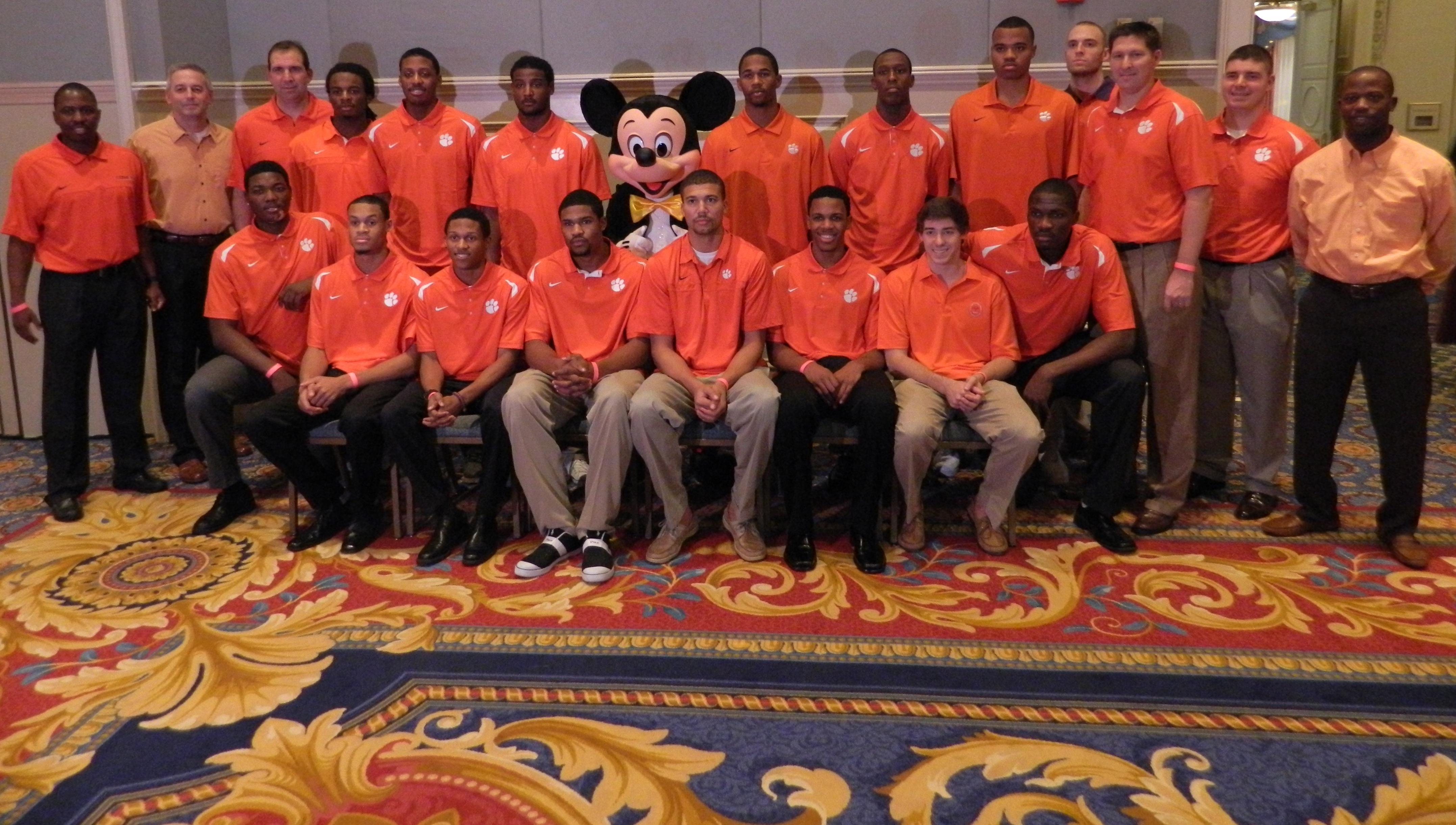 ORLANDO – Clemson men’s basketball had an early start to its Thanksgiving holiday on Wednesday, as it traveled to the Disney World Resort to take part in the 2012 Old Spice Classic.  The seventh annual event features a loaded field, not limited to the Tigers’ opening round opponent, No. 16 ranked Gonzaga.  In addition to the Zags, Clemson is in the tournament along with Davidson, Marist, Oklahoma, UTEP, Vanderbilt and West Virginia. Clemson hopes to be the third different ACC program to claim the Old Spice Classic.  NC State won the event in 2007 and Florida State took the title in 2009.  Gonzaga won in its first trip to the event in 2008. This will be just the second meeting in history between the Tigers and Zags.  The programs first met in 1997 in Alaska at the Top of the World Classic, when Rick Barnes coached Clemson and Dan Monson – now at Long Beach State – coached Gonzaga.  The Zags put themselves on the college basketball map by winning that game over Clemson’s fifth-ranked team, and began a run of success that has not stopped ever since.  Gonzaga has made the NCAA Tournament each of the past 14 seasons. Thursday’s matchup is certainly Clemson’s biggest non-conference test in a number of years.  Clemson last defeated a ranked non-conference team in 2009 in Anaheim, CA at the 76 Classic.  That year, Trevor Booker’s last second blocked shot preserved a 70-69 victory over the 10th-ranked Butler Bulldogs in the second round.  Over the years, Clemson has eight wins over non-conference ranked teams.  In terms of national reputation, none were bigger than the Tigers’ shocking 79-71 overtime triumph over defending national champion Kentucky to start the 1996-97 season. In terms of the matchup itself, the Zags present a challenge for Clemson’s stingy defense.  Gonzaga enters the game averaging 94 points per game, most in the nation, and has defeated all three of its early-season opponents by an average of 36.7 points.  Six players average double figures for Mark Few’s team, including 7-footer Przemek Karnowski.  Gonzaga, who presents a blend of size and skill, will face a Clemson defense yielding just 49.5 points per game over its first two contests.  In addition, Clemson opponents have made just 7-of-25 (.280) from three-point range.  Conversely, Gonzaga has made 44 percnet of its three-point attempts. Following the hour-long flight to Orlando, the team took to the Jostens Center at the ESPN Wide World of Sports Complex for a practice that spanned roughly two hours.  After that, Clemson made the short walk over to the HP Field House, host site of the tournament, and spent about 40 minutes working on game shots and free throws. The players and coaches finally checked in just prior to 5:00, where they enjoyed some down time before the welcome reception at Disney’s Yacht Club –Clemson’s hotel for the week.  Players, coaches and families were treated to a Thanksgiving feast – turkey, stuffing, candied yams, mashed potatoes and green beans.  The highlight of day one came at the end of the reception, when several members of the team took to the dance floor with the Disney characters.  T.J. Sapp and Carson Fields had their own renditions of the “Dougie,” while Josh Smith easily spent the most time of any Tiger on the dance floor. Tiger fans are encouraged to tune in Thanksgiving night at 9:00 PM to ESPN2 to catch Clemson in action against Gonzaga, or on one of the Clemson radio network affiliates.  Live network audio will also be available on ClemsonTigers.com.  The Tigers follow the Oklahoma vs. UTEP game, which is slated to tip off at 7:00.  Full postgame coverage will be available on ClemsonTigers.com following its completion. Other news and noteworthy items from Wednesday: • The Wide World of Sports Complex is only about 45 minutes from the campus of Montverde Academy, the school that sent 6-foot-10 freshman center Landry Nnoko to Clemson.  Nnoko said some of his Montverde coaches would be making the short drive to see him play this week. • T.J. Sapp is the only native of the Sunshine State on Clemson’s roster.  The sophomore guard said his mother and father would be making the nearly four hour trip north from Fort Lauderdale to see him play.  The tournament set up perfectly for Sapp, whose sister is a senior at the University of Central Florida in Orlando. • Damarcus Harrison is the only player on Clemson’s roster with any experience playing Gonzaga.  He appeared in three games for BYU last season against the Zags and helped the Cougars to a 20-point win at home, chipping in five points and three rebounds. • One of the announcers for Thursday’s game on ESPN2 is color analyst Fran Fraschilla, former head coach at Manhattan, St. John’s and New Mexico.  In an interesting twist, Fraschilla’s son, James, is a freshman guard for Oklahoma, who Clemson could face in the second round Friday.