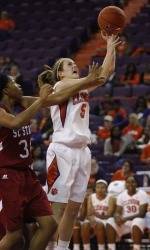 ROCHESTER, MI – The Clemson Lady Tigers protected the ball well, but went cold from the floor in the second half as Oakland defeated Clemson, 63-51, on Friday at the O’Rena in Rochester, MI. Nikki Dixon led Clemson (3-5) with 13 points and added five steals, but Clemson hit just eight-of-32 attempts in the second half as Oakland (4-4) pulled away down the stretch for the win.

Freshman Kelly Gramlich had nine points on a season-best three 3-point goals for Clemson, who had a season-low 17 turnovers, but allowed 18 points off those miscues. By comparison, Clemson scored just eleven points off 21 Grizzly turnovers.

Oakland’s Bethany Watterworth had 16 points in the second half and 21 total to lead all scorers while Zakiya Minifee had 15 points, 11 rebounds, five steals, and four assists for the Grizz.

Quinyotta Pettaway, Chelsea Lindsay, and Natiece Ford each had six points for the Lady Tigers, while Chancie Dunn’s six assists and five rebounds were each team bests.

Dixon hit all nine of her free throw attempts, upping her season average from .500 to .592 on her way to her eighth straight game with double-figure scoring to start her career. Clemson was 11-15 (.733) from the line overall in the game. The Lady Tigers, who were coming off a game in which they had a plus-21 rebounding margin, were outrebounded, 45-32, by Oakland, who tallied 13 offensive rebounds and held Clemson to just two second chance points.

Oakland held Clemson scoreless for the final three minutes of the first half in taking a seven-point lead into the break. Neither team found its touch in the first half, with Clemson hitting .370 from the floor and Oakland at .375. Minifee kept the Grizzlies afloat in the half with eleven points, including two threes. Gramlich’s two threes led Clemson offensively, as the freshman hit the pair from deep off screens.

Clemson knocked the margin down to four in early in the second half, but struggled to get over the two-possession hump. With a 47-42 lead, the Grizzlies scored six straight points to take an 11-point lead from which Clemson could not recover.

The Lady Tigers will take the week off from competition as they have finals this week, and return to the court on Dec. 18 against NC Central in Littlejohn Coliseum.