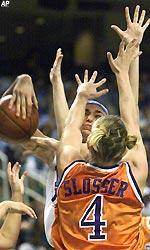 GREENSBORO, NC – Candace Sutton and Coretta Brown both scored 20 points each in leading North Carolina to a 80-71 win over Clemson in the quarterfinal round of the 26th annual Atlantic Coast Conference women’s basketball tournament at Greensboro Coliseum, in Greensboro, NC Saturday evening.

Clemson’s Chrissy Floyd had a game-high 21 points. She finished the game 10-28 from the floor and 1-2 from the free throw line. Floyd also had six rebound and one steal. Floyd scored her 500th point of the season in the game. She now has 505 points this season. For her career she had 1,937 points.

Clemson has a 14-15 record overall while North Carolina improves to 26-4 this season.

In the first half, North Carolina went ahead 21-16 with 6:50 left. Clemson went on a 9-4 run and tied the score at 25-25 with 3:40 on the clock as Tabitha Vasilas hit a three-pointer from the right side. The Tar Heels outscored the Lady Tigers 11-6 to finish the half and took a 36-31 lead into the lockerroom.

The Tar Heels outscored Clemson 11-6 to star the second half and took a 47-37 lead with 15:34 left in the game. Candace Sutton scored six points in this rally.

“Our interior defense was our biggest problem tonight,” said Clemson Head Coach Jim Davis. “We had to work harder on the defensive end. We hang our hat on defensive play and it wasn’t very good tonight. We are disappointed to have a 14-15 record. Our objective every year is to compete for the National Championship. Obviously, you can’t win the National Championship if you don’t go to the big dance. I will make some excuses for a minute and say we had some bad breaks this year. We had injuries that set us back, and we had players who had to cut their teeth on college basketball this season. We competed hard, and our record doesn’t indicate the competitiveness of this team. Defensively, we tried to keep North Carolina off the boards and eliminated second chance opportunities. I thought our transition kept us in the game.”

“I felt fine today, and I came out focused and ready to play,” said Clemson’s Chrissy Floyd. “I was focused on the game. I knew I had to step up and knock down shots and do the best I can.”