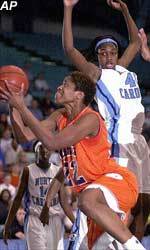 Juana Brown led the Tar Heels with 24 points as she was 10-18 from the field. Clemson was led in scoring by Erin Batth and Chrissy Floyd as both players scored 19 points each. Batth also had 14 rebounds.

Krystal Scott hit one of two free throws with 6.2 seconds remaining in the second overtime period. North Carolina inbounded the ball to Brown. She drove down the court and put in a leaning layup to give North Carolina the win.

The Lady Tigers are ranked 25th in the Associated Press poll and 24th in the USA Today listing. Clemson has won three of the last five games with the Tar Heels.

Clemson took the lead for the first time, 23-22 with 10:50 left as Nuria Forns hit a field goal from the right side. North Carolina took a 35-32 advantage with 5:50 remaining as Coretta Brown hit two free throws. From this point, Clemson went on a 9-2 run and built a 43-37 lead with 2:14 remaining. Lakeia Stokes scored six points in this Lady Tiger rally. Clemson maintained the lead and had a 49-43 lead at the half.

Clemson outscored North Carolina 9-2 to start the second half and the Lady Tigers took the largest lead of the game, 58-45, 13 points with 16:55 left to go in the game. Floyd had four points in this Lady Tiger run. North Carolina scored nine unanswered points and narrowed Clemson’s lead to three points 60-57 with 11:58 remaining.

The Tar Heels took the lead 69-68 with 5:40 left as Chrystal Baptist hit a jumper at the foul line. Clemson scored the next four points and had a 73-69 advantage with 4,20 left. The Tar Heels led 75-73 with 2:26 remaining. Krystal Scott hit one of two free throws to bring Clemson within one with 2:12 left.

North Carolina maintained their lead and had a 84-80 lead with :30 seconds remaining in regulation. From this point, Krystal Scott scored on a layup. After a North Carolina turnover, Julie Aderhold scored from underneath with 8.9 seconds remaining to tie the game. Barksdale had two chances to tie the game but missed both shots as the ball bounced off the rim as time expired..

In the second overtime period, the game was tied 98-98 with :55 seconds remaining as Krystal Scott made a layup. Krystal Scott hit one of two free throws and Clemson took a 99-98 lead with 6.2 seconds left. North Carolina inbounded the ball to Juana Brown. She droved the length of the court and scored on a driving shot with 0.9 seconds remaining to give the Tar Heels a 100-99 advantage.

Clemson will play Wake Forest in Winston-Salem, NC on Sunday, February 11, at 1:00 p.m. in the Lady Tigers’ next action. This game will be televised by the Sports South, Florida Sunshine, and Home Team Sports Networks.