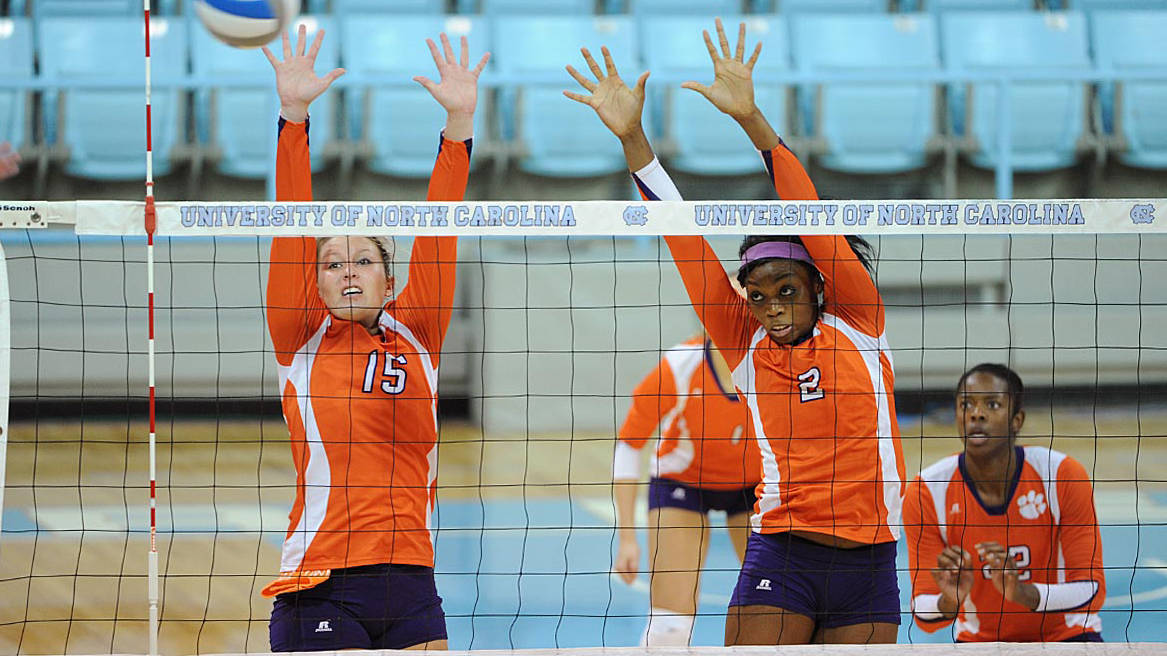 Sandra Adeleye led all players with 16 kills and added three blocks for a total of 18.5 points, but was the only Clemson player in double-figures for the match. Mo Simmons led Clemson with 19 digs, her highest mark of the season, but was held to just eight kills in 38 attacks.

Clemson hit just .155 in the match, which included 25 attack errors, 20 of which were unforced. Hannah Brenner had 34 assists and 10 digs, and also added a season-high seven kills for the Tigers. Freshman Lou Davis played libero for three sets, while Natalie Patzin moved over to an outside hitter position. Davis had four digs in the match, while Patzin added twelve and Clemson’s lone service ace.

The Tigers entered the match averaging 1.61 aces per set, but only had Patzin’s one on Wednesday.

North Carolina hit .212 with 59 kills and 27 attack errors, as the Tigers picked up nine blocks, led by four form Alexa Rand. Emily McGee led North Carolina with 15 kills, and setter Cora Harms had 44 assists and a match-high 22 digs as Clemson attempted to keep the Tar Heels out of system.

The Tar Heels cruised to a 25-14 first-set victory, before Clemson was able to strike back in the second. The set was within one point for most of the way, but a 4-0 run gave Clemson a bit of a charge into a 20-17 lead. The Heels responded to tie it at 20-20, and after the teams traded points, Brenner found Adeleye for an emphatic kill, and then put one down herself to give Clemson the 25-23 win.

Each point was tough to come by, as both teams excel at reading attacks and passing, but it was a key run late in the third set that carried momentum into the fourth set for the Heels. Clemson held leads of 22-18 and 24-22 in the set to go ahead 2-1 in the match, but the Tar Heels delighted the home crowd with an 8-2 run down the stretch to take the third, 26-24.

Down 24-22, McGee put down a kill, and then a block knotted the match. McGee’s ensuing serve hit the tape and dropped over for an ace, setting up set point, which North Carolina claimed on another block.

In the fourth set, a 9-1 run by the Tar Heels took a 7-7 match and set up a 16-8 advantage for North Carolina. Clemson could get no closer than four at 23-19 as the Heels held on for the win, their fifth straight in the series.

Clemson will return home Wednesday night before heading back to North Carolina to take on NC State (13-1, 3-0 ACC) on Saturday at 5:00 pm in Reynolds Coliseum.